Why does Latin have five different noun declensions?

Do they originate in particular dialects or languages that influenced Latin?

Is the question even answerable? With any degree of certainty?

The different declensions started in Proto-Indo-European. Latin regularized and simplified them, giving the five somewhat-regular patterns you're familiar with.

*h₂ was a "laryngeal" sound, so-called because we don't have a better name for it. Scholars can't agree on what its actual sound was; there are arguments to be made for various different sounds, though I'm partial to the voiceless velar fricative as in "Bach" (/x/).

As Proto-Indo-European broke apart, all the laryngeals disappeared. But when they were next to a vowel they left "color" on it before vanishing. *h₂ in particular tended to turn e into a.

So these turned into the Latin "a-stem" nouns: the first declension.

Stems ending in a "thematic vowel"

Some nouns were formed using suffixes ending in o. These were the only true "vowel-stem nouns" in PIE, and the "thematic" o occasionally became e (such as in the vocative singular). If you know Ancient Greek, you'll recognize this intermittent o/e immediately from verb conjugations.

In Old Latin, short o tended to turn into u in many environments. So the original forms -os, -om became -us, -um. This formed the second declension. (Note that this pattern didn't affect long ō, which persisted in the accusative plural.)

PIE didn't distinguish much between the vowel i and the consonant y (IPA /j/), a trend which persisted into Latin. So when endings were applied to nouns ending in *-y, it tended to become a vowel i.

These became the "i-stem nouns", a subset of the third declension. These are the ones like turris which have -im in the accusative singular.

Like with y/i, PIE didn't have much of a distinction between u and w. (Same as Latin: compare auspex with a vowel and avis with a consonant, from the same stem au-.)

Nouns whose stems ended in *-w became the Latin "u-stems", the fourth declension. Unlike the second declension, the u that appears here actually comes from a PIE w/u, so you don't see it alternating with o.

I'm not sure of the etymology of this class, actually. And someone with a better knowledge of Proto-Indo-European should feel free to correct me.

But I believe stems ending in "laryngeals" other than *h₂ became the fifth-declension, with the preceding vowel becoming the characteristic e.

Stems ending in anything else

In Latin, these ended up becoming "consonant-stems", which make up the majority of the third declension. These are the ones like rex which have -em in the accusative singular.

Nouns which didn't fit cleanly into any of these groups were generally shoved into the nearest one. Diēs, for example, became the only masculine in the fifth-declension, while domus can't decide whether it's second or fourth. But almost no nouns actually remained "irregular"; Latin was very good at forcing them into these five categories.

The declensions are historical and developed from Proto-Indo-European.

Per Sihler's New Comparative Grammar of Greek and Latin: 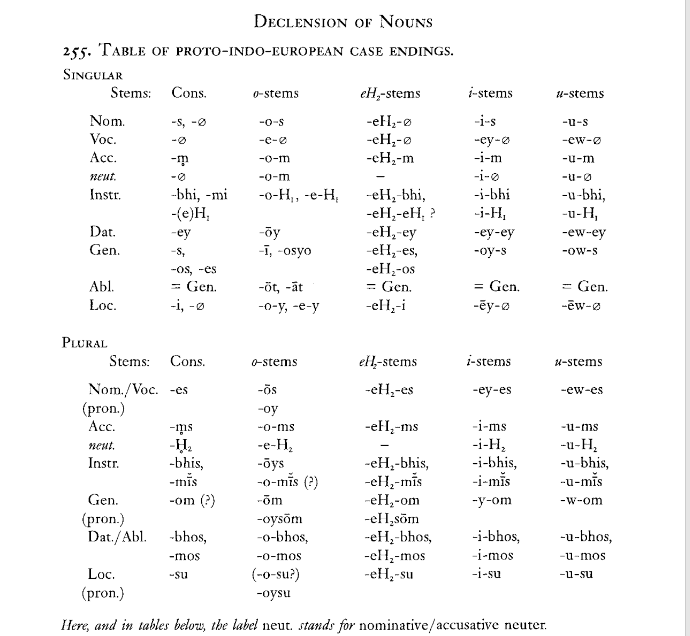 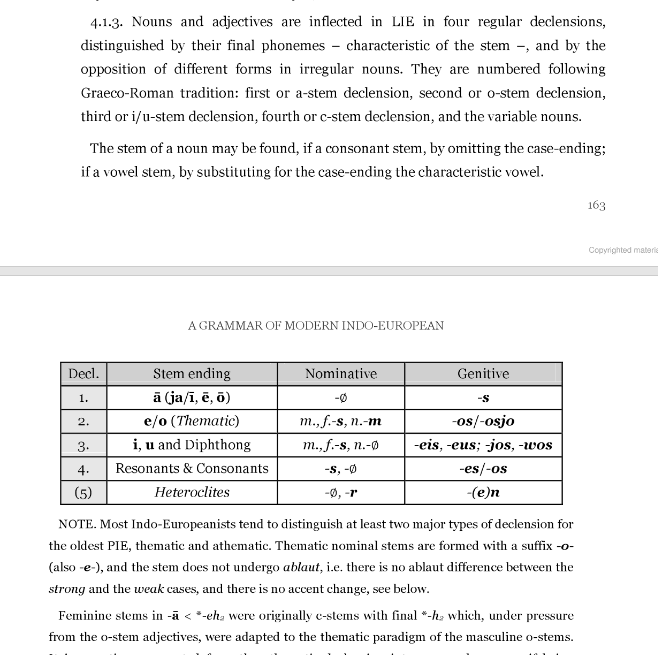 For what it is worth, declensions have arisen independently in different language families. As mentioned, the Proto Indo-European language had 8 cases, which reduced to 5 in Ancient Greek, 6 in Latin, 6 in Russian, 8 in Sanskrit (but only 3 in Hindi), and 4 in German (and 0 in English, French, etc.).

Regarding other language families ... The classical Semitic languages (Arabic, etc.) have 3. Quechua, the language of the Incas, has 7 - 19 (depending on how exactly you define a case). Japanese has 7 (although they are marked with separate particle words). Hungarian has 7. Somali has 4.

Not the answer you're looking for? Browse other questions tagged history language-evolution or ask your own question.

21
Non-typographical evidence of V being pronounced as [w]
9
How did the fourth declension neuter dative singular become different from the non-neuter ending?
5
Does "a priori" have an implied substantive?
2
Why does Latin use declensions instead of just cases and gender?

37
Accusative equals nominative for neuter words – how universal is this and why?
7
Was Apollo the sun god in the Augustan era?
5
How was Trajan's comic called?
12
Does Latin have a mechanism to disambiguate possessive pronouns of the same gender referring to distinct persons?
4
Does any Latin noun originally end in -r?
7
When did unsyncopated forms become archaic?