Were there ever two “Y” forms in classical Greek or Latin?

Is there a historical reason for this? Were the letters pronounced differently?

I think that the two forms of the letter Y given on that page are purely aesthetic variations of the same character. It also makes the letter array a neat 6 × 4 array, like the Greek one on the other page of the specimen book. Palatino was a typographer, after all.

However, for a short time in antiquity, there were two different forms of the Y, the Y as we know it and a "short Y" Ⱶ introduced be emperor Claudius and not continued after his reign, see Examples of the use of Claudian letters (Ⅎ, Ↄ, Ⱶ)

I think jknappen is right: that extra Y isn't anything but a fancy Y. A few pages back (86/87), only one Y is mentioned.

There were two forms of the the Y in Greek, though. In fact, there were several. It's unfortunate that Lilian Jeffery's Local Scripts of Archaic Greece doesn't return a preview, but you can see a succinct chart under Cook's Greek Inscriptions. 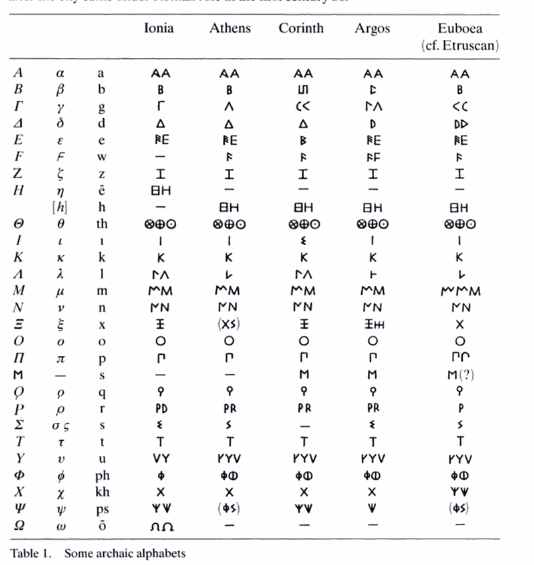 It wasn't until rather late that in its history that the Greek alphabet was standardized.

Not that this answers your specific query, but I mention it in case you stumble upon additional variations in the future.

Not the answer you're looking for? Browse other questions tagged alphabet or ask your own question.

27
Why are there no native Latin words with a Z?
19
Are there any complete Latin inscriptions written in boustrophedon?
19
Is there a Latin version of “Quick brown fox…”?
24
What are the classical names of the letters of the Latin alphabet?
9
On two types of S in a text from 1759
3
Is there a Latin standard for transliterating Russian?
5
How and when did we get two forms of sigma?
5
How many Greek letters are there?
4
Why aren't there more letters representing consonant digraphs in Greek?
3
When were /k/ and /q/ first distinguished in the Greek or Latin alphabet?