Can the ablative take a non-human agent or a human instrument?

This seems to indicate:

Are these firm rules? Or can a non-human be personified by including the preposition, or a human objectified by excluding it?

Yes, this is attested in Classical Latin, particularly in the case of the non-human serving as an agent (taking the preposition). Allen and Greenough, §405:

The ablative of the agent is commonest with nouns denoting persons, but it occurs also with names of things or qualities when these are conceived as performing an action and so are partly or wholly personified

As an example, they provide:

hostēs ā fortūnā dēserēbantur, the enemy were deserted by Fortune
ā canibus laniātus est, he was torn to pieces by dogs.

Gildersleeve, §401, asserts that the substitution is permissible in both directions, that is, that a human can be objectified as well:

These grammars provide numerous examples of the personification of a non-human as the agent in the ablative of agent, in which the preposition ab/ā is applied.

Examples for the objectification of a human person via the ablative of instrument, with no preposition, are apparently less frequent, but the construction is still permissible.

The following is my summary of Silvia Luraghi 2010 paper, in the tabular format (obviously, here I summarized those parts that are relevant to your question only). All the examples are hers, including the translation. 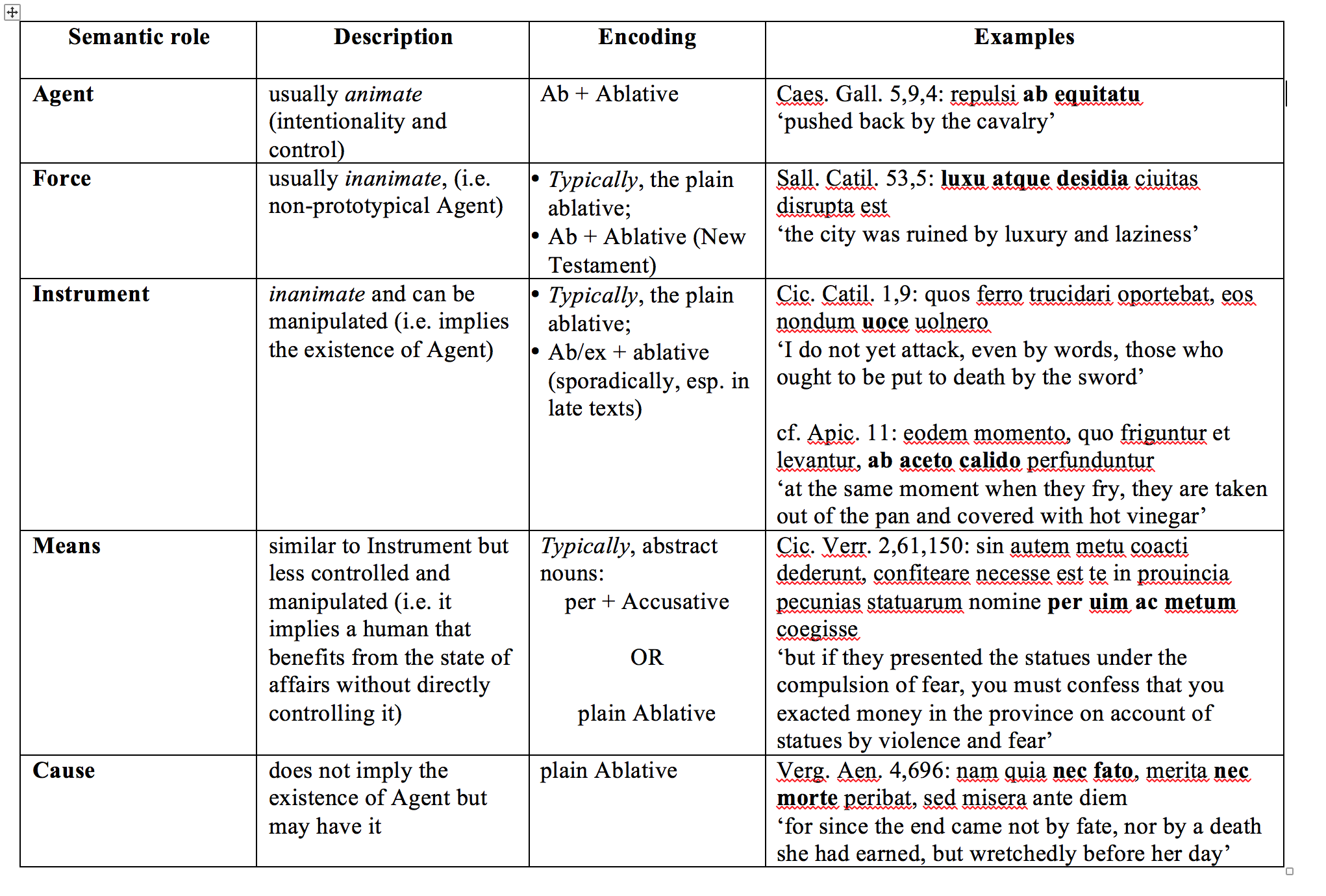 Luraghi 1986 writes that in Latin

“human agents are usually marked by a prepositional phrase introduced by the preposition ab, which takes the ablative case” whereas

Drawing on volume 2.1 of Leumann, Luraghi does mention that “in some cases, however, the preposition ab may be extended to non-human agents as well” but it happens in “[v]arious poetic occurrences, with verbs like mouere, agitare, uincere, e.g.

She concludes by saying that

“Non-human agents can receive the preposition ab in particular contexts, in which they are clearly connected to human activities,” e.g.

Not only can animals and non-humans personified act as agent, but humans can act as instruments, as we see in Livy III.37:

8
Which agents are human?
8
Dative–ablative ambiguity

8
When can the gerund take an object?
6
Can the absolute ablative be used with a prepositional phrase?
8
Can a "dative of agent" appear in an Ablative Absolute construction (and, more generally, in a non-verbal context)?
7
What is the longest sequence of ablative/dative nouns ever to appear in Latin texts
4
Can the ablative of agent and a relative pronoun be used at the same time?
3
Does accipio take the ablative?
7
Mirabile visu, horribile dictu ― is this the ablative?