What punctuation was used in Classical Latin?

Which (if any) of these were actually used in Classical Latin, and what, if not punctuation, was used instead?

We should first recognize that there was not one system of punctuation in use during Classical times. However, all of modern punctuation, including commas, periods, colons, semicolons, etc. are more recent, not just for Latin, but for European languages as a whole (and in fact worldwide, as e.g. Chinese borrowed the question mark).

Not only that, but word spacing too is relatively recent. Many early manuscripts lack any punctuation and word division.

In the earliest inscriptions, too, you can see a lack of word division or punctuation. Take a look at the Duenos Inscription (ca. 580–570 BCE): 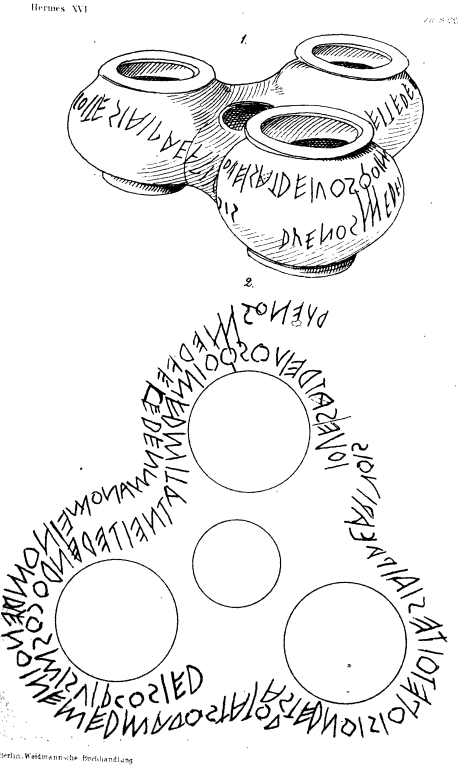 However common this was, there were some variations. In a dedication to Castor and Pollux (ca. 550–525 BCE) in between "to Castor" (CASTOREI) and "to Pollux" (PODLOUQUEI) there is word division indicated by an interpunct ·. 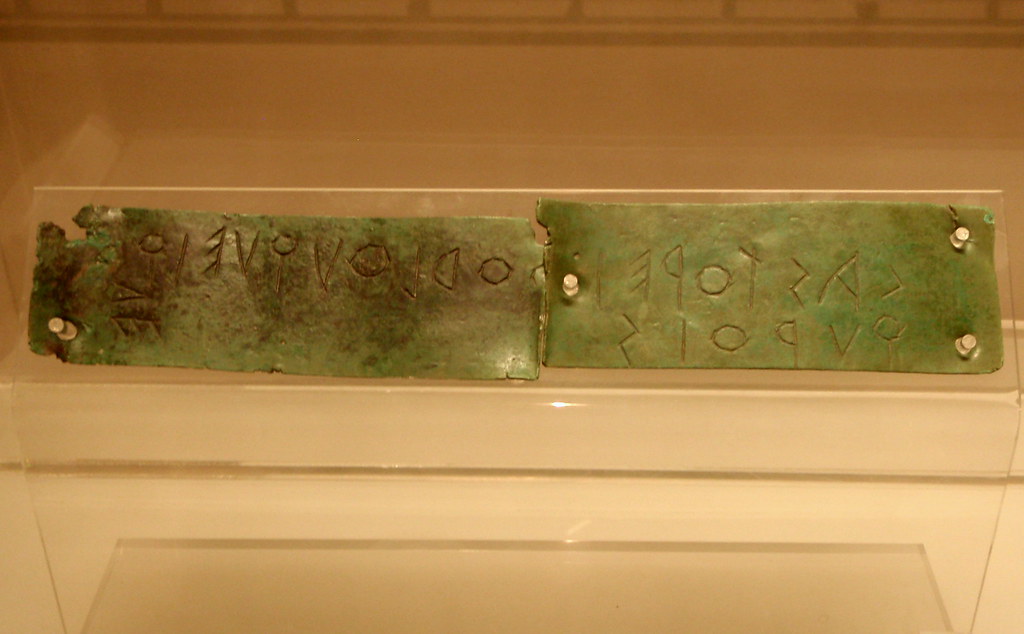 The interpunct was most often used for word division in inscriptions. Sometimes, there may be two dots, even three as evident from the Forum Inscription (6th century):

You may also note in that inscription that a slash \ is used for sentence division.

Finally, because the letter I in Latin was used for both a vowel (long and short) and a consonant (having the IPA value of j), it was not infrequently drawn particularly elongated.

Sacks, David 2007. Letter Perfect: The Marvelous History of Our Alphabet From A to Z. Random.

(The following is based on Wallace 2011, The Latin alphabet and orthography and Edmondson 2015, Inscribing Roman Texts: Officinae, Layout, and Carving Techniques)

Most Latin documents, regardless of type, had very little in the way of punctuation (p. 22).

What's really interesting about interpuncts is that they were normally added after the text was inscribed (Edmondson 2015: 127).

Indentation as well as empty space was used in longer texts to mark paragraphs, e.g in the Lyon Table. 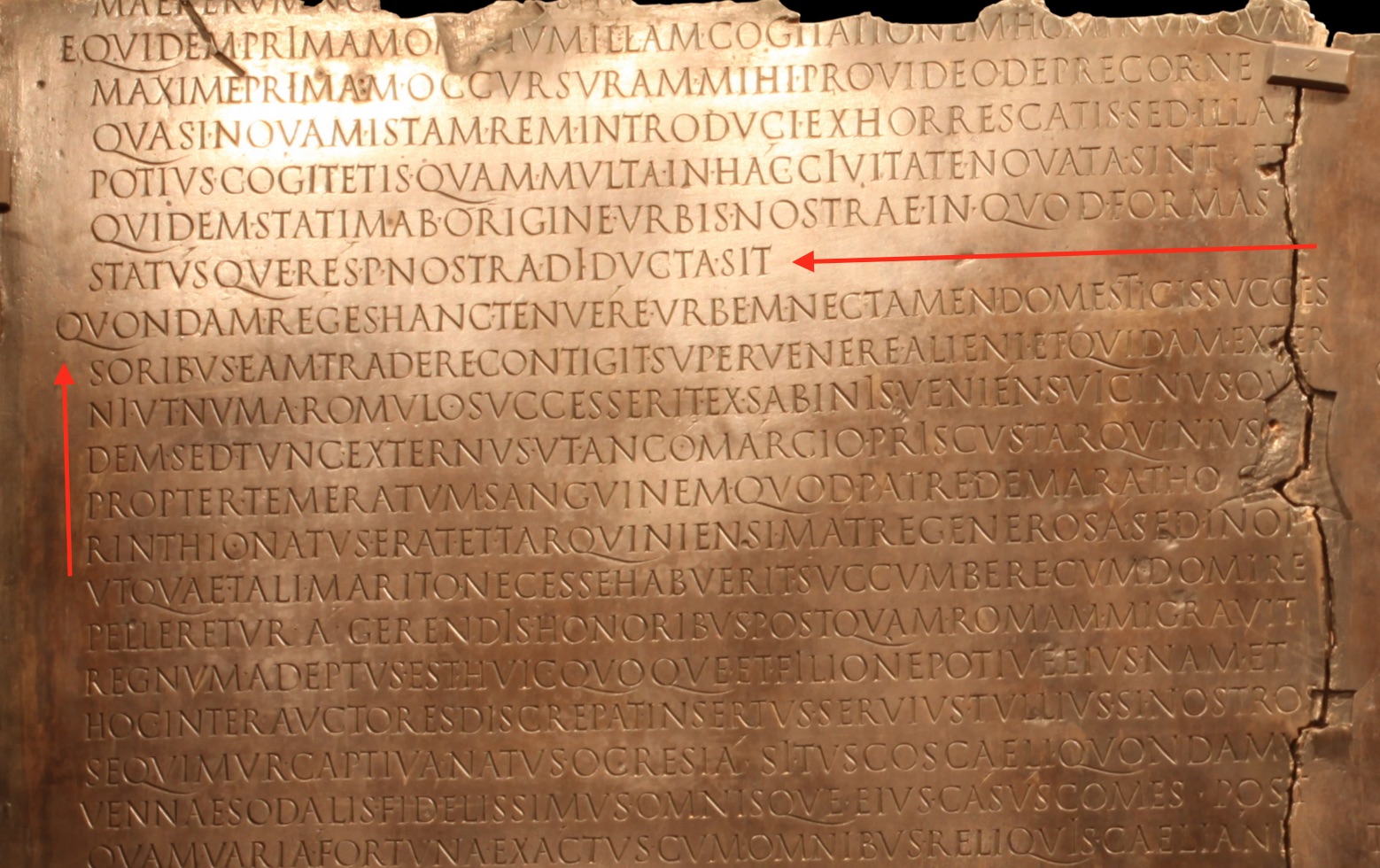 After the great answers here, I would like to share the contents of a paper I found on this topic

Latin sentence structure has very clear equivalents for some of our punctuation marks, but not for all of them; and it has its own methods for expressing certain things for which we have developed other typographical aids.

The paper mentions among others, the following equivalents of modern punctuation.

It is probable that most written text were not punctuated at all.

The main punctuation used in inscriptions (on monuments, sculptures, etc.) was a central point · or interpunct, by opposition to the low point we currently use) to separate words, or to separate initial letters of abbreviations (eg S.P.Q.R.).

Large inscriptions you can see in Rome have been restored, sometimes several times, or put on old monuments many years after their construction so one must be careful when drawing conclusions from them.

Most texts we have are manuscript copies of the middle ages. Each generation, country and abbaye used its own abbreviations and conventions, so we do not have a clear idea of the non-letter notations of the roman authors.

We know Romans used several forms of stenography to take notes during speeches, but we have little testimony of how it was written (wax tablets for instance were constantly reused, and do not age well).

Not the answer you're looking for? Browse other questions tagged classical-latin punctuation or ask your own question.

25
Why did Roman authors never feel a need for word spacing?
21
When did scriptio continua and interpuncts give way to spaces between words in Latin?
10
Was Classical Latin syntax complex on purpose?
10
Did the Romans have a "question mark"?
8
Ancient guides or descriptions of punctuation
13
How to tell when an inscription is post-classical?
2
Ubi jus ibi remedium
2
Translating "In my hands, creation" into Latin
2
How was the original Ovid Metamorphoses formatted/punctuated most likely?

15
Were mnemonics used to teach Classical Latin?
18
What were used as "filler" words in Classical Latin?
8
Ancient guides or descriptions of punctuation
17
In Classical Latin, what was the geographic extent of "Asia"?
6
Is there such a thing as "word-[space-comma-space]-word" punctuation in Latin?
4
To What Extent Was Classical Latin Affected by Classical Greek?
5
Quality of final ĕ ĭ ŏ
6
Latinisation of a surname. Seeking advice from expert Latinists