When and how much did Romans speak Greek?

Here are a few historical facts that most amateur ancient historians are aware of:

This collection of loose "facts" lacks cohesion in my mind. Some questions:

Feel free to suggest ways to narrow down this question in the comments, if this is ridiculously broad. Although I'm interested in movements throughout the empire, I chose Rome as the primary focus for this question.

Here is the stub of an answer.

There were many, many Greeks in Rome around the turn of the millennium. Many of them were educated slaves, 'imported' to teach Greek to Roman children of the middle and upper classes. The language was considered an essential part of the education of an educated Roman child. It may be compared to the position of Latin in Europe and in its (former) colonies until ca. 1800. As far as we know, Caesar most probably did not say et tu, Brute to Brutus upon his death, but possibly καὶ σὺ, τέκνον; although Suetonius argues against this then common story.

I am not aware of an actual Greek ghetto: I think the Greeks lived all over the city. So you could probably hear some Greek in the streets.

The first Greek colonies near Naples may have appeared in the second millennium BC, before the mythical date of the foundation of Rome in 753 BC. In the 8th century, there was a a wave of Greek colonisation all along the coasts of southern Italy, Sicily, southern France, and many other places around the Mediterranean and the Black Sea, e.g. Cumae and Ischia near the later Naples. The Greek colonies in Italy and Sicily are known collectively as Magna Graecia.

There was much contact between Etruscans, Romans, and Greeks in Italy when Rome was still a smallish city-state. Major Greek towns like Naples and Cumae are about 200 km south of Rome, or 10 hours (by trireme) to 25 hours (merchant ship) away. The Etruscans also conquered some Greek colonies and used an adaptation of the Greek alphabet before Rome, too, adopted (another) variant of the Greek alphabet. By the fourth century BC, Rome had acquired so many territories that it practically bordered on Greece near Neapolis.

Contact between the Romans and the [Greek] Cumaeans is recorded during the reign of Aristodemus [of Cumae, c. 550 – c. 490 BC]. Livy states that immediately prior to the war between Rome and Clusium, the Roman senate sent agents to Cumae to purchase grain in anticipation of a siege of Rome.[8] Also Lucius Tarquinius Superbus, the last legendary King of Rome, lived his life in exile with Aristodemus at Cumae after the Battle of Lake Regillus and died there in 495 BC.[9]
— https://en.wikipedia.org/wiki/Cumae

By the fourth century, Rome ruled over some Greek cities, such as Cumae. 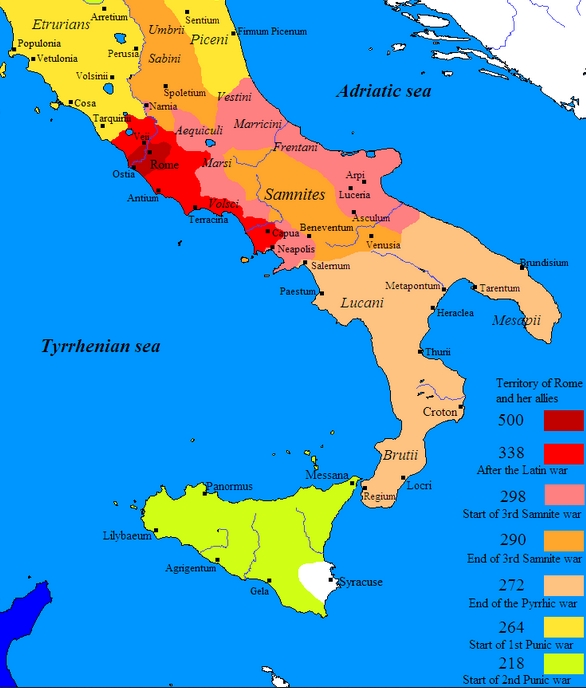 Even now there are speakers of Greek in southern Italy. It took millennia for Greek to (almost) disappear from there, see this question:

Why is it that Latin was more “successful” in the western part of the Empire than in the eastern part?

During the Roman Republic, many complained about Greek influence on literary Latin style, as can be read in contemporary Roman literature. The Greek style of sculpture was also imported to Rome. From what I recall, traditional Romans even objected during the late Republic to the naked and idealised, muscular statues. Traditional Romans also inveighed against other Greek influences, amongst which they sometimes placed the influence of rich merchants: a good Roman was a farmer and a soldier, not a merchant. Even now, the upper classes around the world generally look down on people who have become rich through trade or business.

Not the answer you're looking for? Browse other questions tagged greek history spoken-language or ask your own question.

21
Did ancient Romans raise the intonation of their voices when asking questions?
13
Are there instances of free indirect discourse in Latin or Greek?
20
Did the Romans ever combine Greek and Latin morphemes?
7
What form of Greek was studied by ancient Romans?
11
When did the Romans start using Z?
10
Did the Romans really speak of "mare nostrum"?