On Macrons and Vowels

Reading LLPSI, I made a list of the proper nouns with macrons in the first lesson of the first chapter:

We encounter with Italia and Eurōpa. But why Europa has a macron but Italia does not? Or why is Dānuvius but not Tiberis? I know some people recommend to just skip macrons for easyness but if I am going to learn Latin, I want to learn it properly since I'm a complete beginner.

Latin vowels can be short or long, and a macron is a sign that a vowel is long. Rōma has a macron over the O because the O in that word happens to be a long vowel. None of the vowels in Tiberis have a macron because all three vowels happen to be short. There's no particular reason why a given vowel is long or short, other than the history of the specific word: it's just part of the word, and has to be memorized separately for each word. (A word can have more than one macron in it, by the way, since any vowel can be long or short; all your examples have exactly one, but that's just a coincidence.)

I just want to add one thing to the stuff that others have noted. The reason why Italia does not have a macron is that this word did not normally have a long vowel. It is scanned as if it were ītalia in verse (and therefore tends to be listed as ītalia in resources that derive quantity exclusively from versification), but this is a metrical convenience to allow the word to be fitted into verse. Otherwise, you'd be stuck with having three light syllables in sequence, which would make it impossible to use in hexameters. Poets could do weird things to words to get them to fit into hexameters, especially with proper names because unlike with common nouns there's often no other suitable word for the thing you're referring to (though it also happens when you really want to use an important common noun like imperator which early poets manage to shoehorn in as indŭpĕrātor.) Note that the same problem does not occur with the related noun Italus because the word's shape makes it much more tractable in hexameters, and so the i is never lengthened in that word in verse.

That the reading ītalia is a matter of verse-license has been documented for some time in secondary literature, because it is explicitly attested by ancient sources discussing pronunciation.

And Consentius who also makes it explicitly clear that he's talking about the length of the i in "Italiam":

Ī agrēe that learning the language with macrons is important. The mēaning often chānges depending on whether the vowel is short or long.

In English wē have short and long vowels as well.

It would benefit a foreigner tō knōw where the long vowels are.

For instance: bōw vs bow

bōw and arrow VS bow down

As you can sēe, vowel length is not always predictable in English. The sāme is the cāse in Latin.

[…] a Roman wishing to differentiate vowels in his own language and having Aristophanes’ system as a model before him would surely have borrowed for his purpose the signs for long and short vowels, that is to say, the macron and breve, which, so far as we know, always had forms (¯ and ˘) that they have retained to the present day.
― Revilo P. Oliver (‘Apex and Sicilicus’, The American Journal of Philology, 87:2, pp. 129–170). P. 143.

One of the best aspects of Ørberg’s work, is how it differentiates vowel length throughout. As explained by @TKR, a macron (ɔ: the dash – ◌̄ – on top of the vowel) denotes a long vowel. The Romans didn’t consistently use their version of macrons, but we have numerous inscriptions demonstrating how it was used, perhaps best known of this the Rēs gestae dīvī Augustī. In fact, they used two symbols for demonstrating a doubling of the phoneme (that is: the sound which the letter represents): an apex (plural apicēs) and a sīcīlicus (plural sīcīlicī). Oliver writes:

The handbooks of epigraphy all assure us that two distinct diacritical marks are found in Roman inscriptions: a phonetic sign, the apex, shaped like an acute accent (´), which was placed above a vowel-letter to show that the vowel was long and not short; and an orthographic sign, the sicilicus, shaped like a small inverted c or a modern comma (’), which was placed above a consonant to show that the consonant should be doubled (e.g., s̓ = ss).
― Oliver 1966: 129.

We also see the apex in the shape of a diagonal bar. Generally, both this symbol and the apex would begin where the letter ended, and extend somewhat over the next one (op. cit. 144).

Now, Quintilian claims that it is completely useless to mark long vowels where there is no doubt whether it should or should be a long vowel – in other words: Whenever you encounter a word which is differentiated only by vowel length, such as malus (evil, bad) vs. mālus (apple), you would add the macron (or for the Romans: the apex). The numerous inscriptions, however, clearly show that only marking long vowels when needed, was not the common practice.

The use of the apex in inscriptions makes it obvious that, from the very first, the function of the apex was to show the correct pronunciation of words that, presumably, were sometimes mispronounced in current speech.
― Op. cit. 135.

In addition to this, a long i was not shown with a symbol, but with the so-called I longa, ɔ: ‘long I’. In the below example, you can see numerous very thin, delicate lines above many of the vowels (apicēs), and several examples of the I longa: 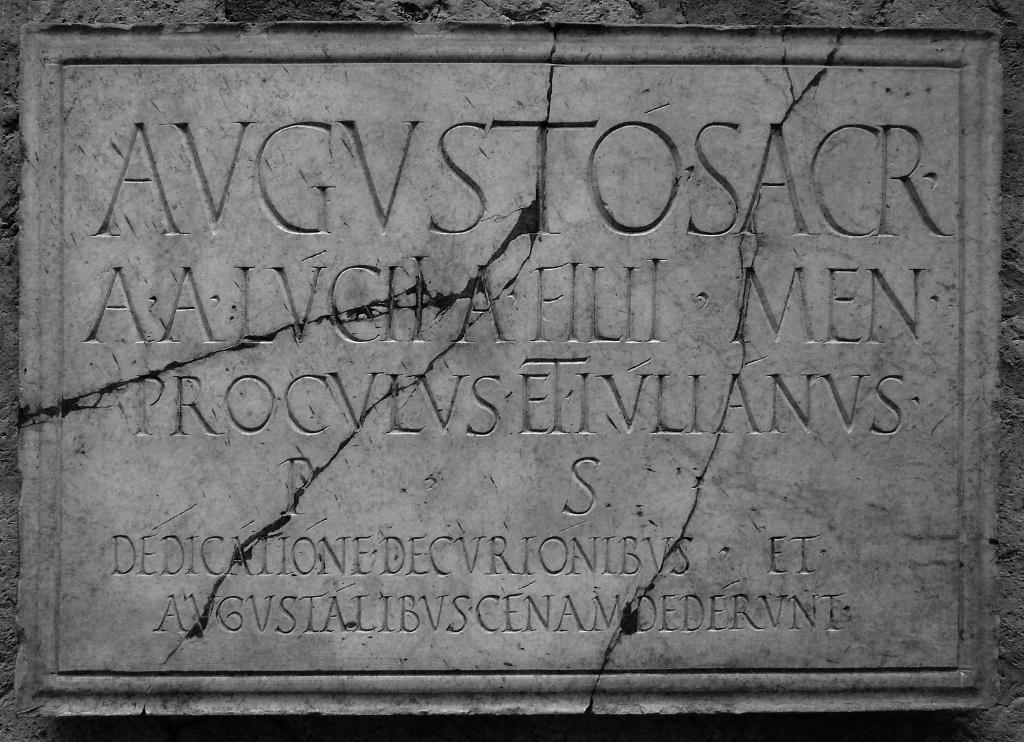 There are, however, enough examples to support the definition given in our handbooks by showing that the mark was indeed used to indicate double consonants […]. [–––] Inscriptions of the late Republic and early Augustan period do show SABEL̓IO for Sabellio, OS̓A for ossa, MVM̓IAES as the ‘archaic’ genitive of Mummia, and possibly VET̓IVS for Vetius.
― Op. cit.: 145.

It is also worth noting that in mediaeval manuscripts, you very often will find a macron over consonants to show doubling or to show a missing nasal: damnū = damnum; gram̄aticus = grammaticus.

It is common for many dictionaries, such as the standard Lewis & Short dictionary (just google ‘Perseus Lewis and Short’) where you will find another symbol: the breve (◌̆), ɔ: the short vowel symbol. However, to continue from my opening quote:

But although a sign for a short vowel would have been decidedly useful in Latin for purposes of differentiation (so long as all long vowels were not marked), there is no indication that such a sign was ever used or even suggested.
― Op. cit.: 143.

That doesn’t mean we can’t find good use for it today. I find it very useful to use this symbol when I do my readings in LLPSI or other books, when memorising words which I tend to make mistakes with regards to vowel length. For example, is ‘river’ in Latin fluvius or flūvius? The latter is incorrect, so when practicing, I will write flŭvius to assure I remember the correct vowel length.

Not the answer you're looking for? Browse other questions tagged orthography lingua-latina-per-se-illustrata or ask your own question.

0
How do Latins distinguished short or long vowels?
9
How do I know where to place macrons?
1
How did Caesar pronounce Latin overlined vowels?

18
Difference between "Lacrimosa" and "Lacrymosa"
6
When to use j and when to use i?
14
When were macrons first used to mark Latin text?
8
Origins and point of boustrophedon
11
Did the Romans ever distinguish long vowels in writing?
1
How were vowels u and i discerned from consonants v and j?
7
Why are some of these names ending in -a and some in -ae?
6
The use of et...et and the following grammar
8
Differences between cano and canto
6
Why "auspex" and not "avspex"?