Is this translation from Ancient Greek correct? 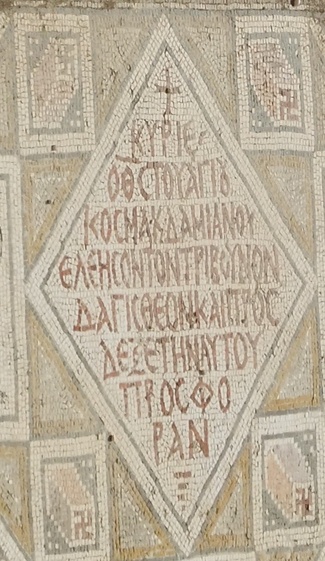 Lord the God the Holy of Kosmas and of Damianos. Have mercy on the way (path) of Dagisteon (Dagisteos) and receive this offering.

Thanks to @Alessio I've managed to reach the book which has this iscription commented on page 246. The authors call Dagistheus mentioned above as "one of Justinian's less successful generals".

Your translation is close!

Here is a letter for letter transcription of the image, except there is a line over "ΘΣ" in the second line:

O Lord, God of saint[s] Cosmas and Damian, have mercy on the tribune Dagistheos and receive his offering.

The symbol at the end of line two is a (genitive) OY digraph. The 'K' as you show is KAI. TPIBOYNON is probably the loan word Tribunus from Latin; the long 'u' has been transliterated as 'ou'.

O Lord, the God of Saint Cosmas and Damian, have mercy on Tribune Dagistheon, and accept his offering. Ξ

Not the answer you're looking for? Browse other questions tagged greek christianity greek-translation or ask your own question.