How did the Romans call their currency?

I wanted to make a kind of western-style WANTED-poster in Latin, and I got a few questions about it. My questions:

Every answer is appreciated, even if it's only an answer on one of the questions.

I wouldn't go with "wanted" per se, but fugitīvus (literally "runaway"). This comes from fugiō "to flee" and referred to rebellious slaves and military deserters. Presumably this "wanted" person is evading pursuit in a similar manner.

Tom Cotton has also suggested captandus (or captanda for a woman), literally something like "needs to be captured". This is closer to the English meaning and sounds more elegant in Latin.

They did indeed! The Romans used different symbols for the different values of currency, like our £ versus $ versus ¢. The relationships between them fluctuated over time, but for most of the Classical period the dēnārius was the most common coin, and also the largest to have its symbol in Unicode: 𐆖.

(If those Unicode symbols don't show up, here's an image.) 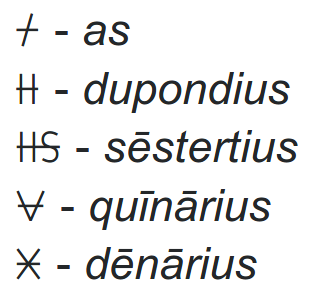 The pattern here is fairly simple: the Roman numeral with a line through it. So 𐆖 was originally worth X (that is, ten) assēs.

There are a few different "or"s in Latin: primarily aut, vel, and -ve. More info on them is available here.

In this case, it sounds like you don't care whether they're dead or alive, either one is perfectly acceptable. So I'd use X vel Y, or the even weaker enclitic form, X-ve Y-ve.

Not the answer you're looking for? Browse other questions tagged roman-culture money or ask your own question.