which of these two translations is in better Latin?

I've gotten a couple Latin translations of Herodotus, and I'm trying to figure out which one has better Latinity. I'm confident they're both grammatically correct, but which one is stylistically better? (I have my suspicions, but I'll keep them quiet, lest I bias the vote.)

Note that I'm not asking for which is the better/more accurate translation—I just want to know about the Latin style. I'd rather read one that's less true to Herodotus but has more elegant Latin than the reverse. 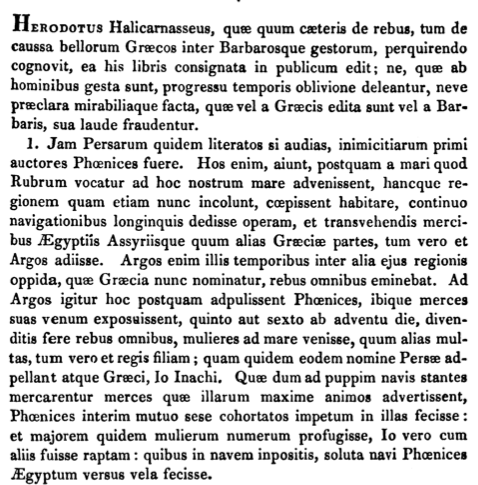 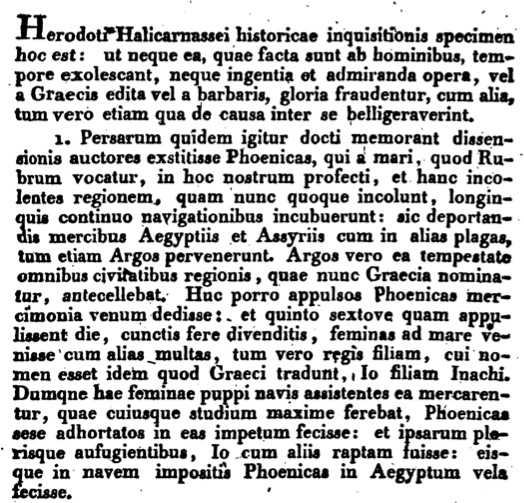 I can't start from the Greek original but, as a translated piece, the first of these seems a bit mechanical, and I prefer the second for style (it's a little shorter, too).

This edit has been a long time in coming, but for what it's worth:

An opinion on "the quality of the Latin" must take into account various ideas of what that might mean. A principal idea that used to be taught (and may be still) is that good classical prose seldom allowed a change of subject within a whole period — such changes, if felt to be unavoidable, perhaps being made by the use of colons or semi-colons. Other points included careful consideration of the word order, including how emphasis might be introduced and ambiguity avoided. Some consistency in the style of syntax was always looked for (this, which generated whole books on prose composition, would require too long a passage of explanation to give here). And simplicity was held to be desirable, to preclude the difficulty in construing that is always to be avoided : for example, a complex series of adverbial clauses within a single period was seldom a good idea. Based on these inculcated principles, my initial instinct on reading through these pieces was to prefer (A).

For a more considered analysis, I thought I might do well to use as a guide Rawlinson's 1858 translation from the Greek, direct into English. To identify separate subjects for each period, I began by arbitrarily editing the matter into eight 'propositions', as follows (ideally, I would have expected eight sentences to correspond roughly to these) :

(i) Persians say Phoenicians began the quarrel. (ii) Phoenicians migrated from Red to Mediterranean Sea (where they remain). (iii) At once, they began long mercantile voyages with wares from Egypt and Assyria. (iv) They traded with inter alia Argos, principal city of (now) Hellas. (v) Business was almost complete after 5-6 days there. (vi) Women having approached, including Io, daughter of Inachus, they were set upon by Phoenicians. (vii) Most escaped but some, including Io , were carried off to Egypt, instigating the quarrel. (viii) The Persian version differs widely from the Phoenician.

Each of your translators makes a different 'grouping' of the propositions:

I have long forgotten what little Greek I ever learned, and can't comment on the original text of Herodotus and how well it is matched by the Latin. All things considered, I think that neither amounts to what is called 'fine writing' and certainly does not suggest the so-called golden age; but in spite of violating the principles (as both do )that I suggested above — except that of brevity in the case of (A) — Schweighäuser's text seems noticeably more clumsy.

Not the answer you're looking for? Browse other questions tagged greek style herodotus or ask your own question.

12
How does the Latin of these two translations of The Little Prince compare?
12
Classical Latin translations from extant Greek sources (or vice versa)
4
Is it possible to use και as both coordinating and correlative conjunctions in the same sentence?
8
cum/tum and the Latin version of Herodotus
4
If these Greek characters ever had alternative orthographies / typographies
3
What do these Greek words say? Possibly 2nd century
2
Two Sappho-related reference requests
6
Confused by two verbs which mean "to say" in Plato's Apology
5
Why are these insects prophetic?