Celer and vēlōx are often treated as synonymous. I feel certain that I learned the technical distinction between them once: that celer was potential speed, while vēlōx was actual speed. So Usain Bolt sitting on the couch would be celer (he's capable of moving very quickly), but not vēlōx (he isn't moving quickly at the moment). Conversely, stones being whipped around in a hurricane would be vēlōx (they're going really fast) but not celer (it's not their natural state).

However, neither Döderlein nor L&S makes any mention of this. Is my memory deceiving me? Or have others heard about this distinction as well?

celer was potential speed (…) but not vēlōx

A counterexample can be found in Cæsar's Commentarii de bello Gallico:

However, celer and velox haven't exactly the same meaning, as explained in this book I've just found: 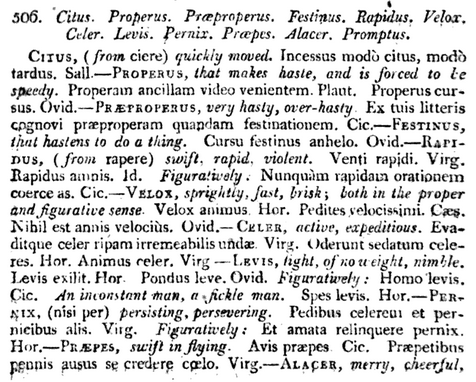 In Dumesnil, Latin Synonyms with Their Different Significations and Examples Taken from the Best Latin Authors, 1809

Not the answer you're looking for? Browse other questions tagged meaning word-comparison adiectivum word-choice or ask your own question.

28
What's the difference between vel, aut, -ve, et cetera?
14
Pulvis aut Favillae in 'Dust and Ashes' in the Book of Job?