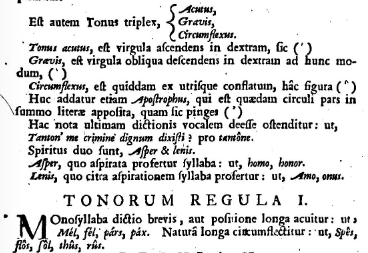 7
Use of circumflex in Latin: Is there a difference between "hora" and "horâ"?
7
Short vowels in lucubrando
6
About scribal abbreviations and diacritics in digitalized book titles

11
Did the Romans drop the x from "maxilla"?
8
Deciphering Latin words from a very old book (printed in 1544)
9
On two types of S in a text from 1759
7
Use of circumflex in Latin: Is there a difference between "hora" and "horâ"?
8
Does "octopus" get a circumflex?
10
Are there minimal pairs between the acute and circumflex accent?
1
How were vowels u and i discerned from consonants v and j?
3
Can I conclude something about pronunciation from I/J and U/V variation?
3
Translation Help Needed in Euler's E025