I lack ample knowledge of Latin to piece together a proper equivalent phrase of the following: "Greatly fruitful," or "Great bounty"; in the context of referring to a food being very nutritious.

Here's what I've came up with; are these accurate?

To add to the previous suggestions, the first word that came to my mind was almus, -a, -um, which Lewis and Short glosses as:

It's used, for instance, to describe vites (vines):

Other complementary words are uber, -is, which means "full, fruitful, fertile, abundant, plentiful, copious, productive," or fecundus, -a, -um, though these words are perhaps more appropriate in the context of living things than of food.

It's better to use single words of the intended meaning when they are available, as in this case, rather than invent phrases.

'Very nourishing' is expressed by something like maximi alimenti, (roughly) 'of greatest alimentary value'.

You asked for an adjective for greatly fruitful, but then you also mention the noun phrase, great bounty, and the Latin noun, frux.

Fruitfulness, bounty and being filled with goodness are all part of the meaning of the Cornu Copiae, the horn of the goddess, Copia; also called the Horn of Plenty or cornucopia in English. Perhaps, this answer is obvious and overused in our culture, however.

Other goddesses like Fortuna and Pax are depicted holding the Cornu Copiae. Here you can see a statue of Tyche (Greek Τύχη), the counterpart of the Roman goddess, Fortuna, holding the horn of plenty: 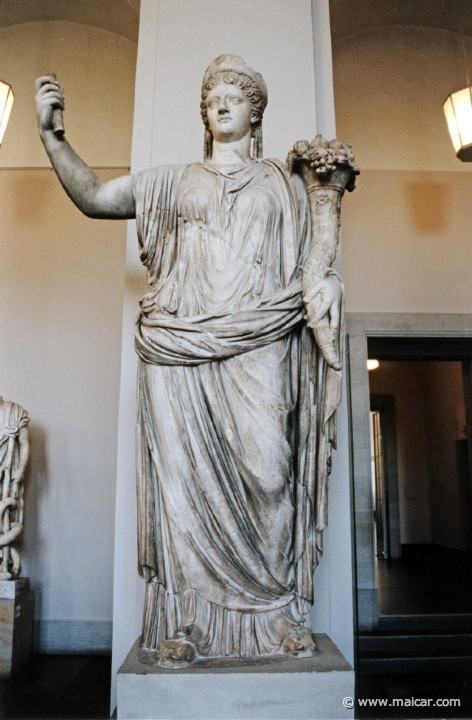 Cornu Copiae corresponds to the Greek Κέρας Ἀμαλθείας, the horn of Amalthea (Greek: Αμαλθεια), the goat who fostered and nursed Zeus. He broke off one of her horns and the story goes that he then promised to fill it with good things to repair his mistake.

Lewis and Short gives explanation and ancient sources under the entry for cornu, cornus- the horn of an animal:

Addendum: Tellus Mater or Terra Mater, Mother Earth, is also depicted holding the Cornu Copiae on her lap with children by her side. 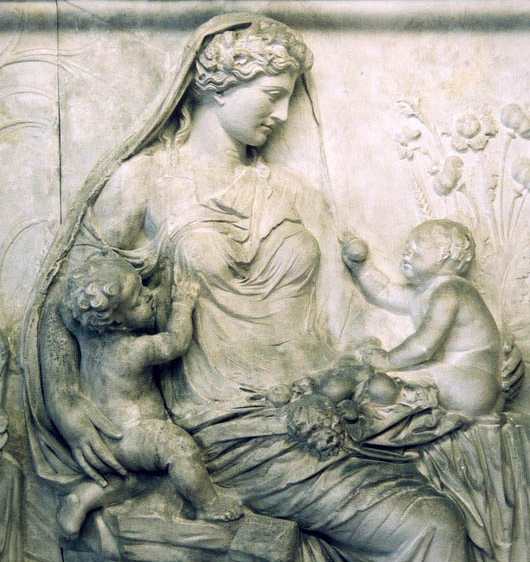 Not the answer you're looking for? Browse other questions tagged vocabulary adiectivum cibus or ask your own question.

35
Which online Latin dictionaries should I use and why?

7
“Fighting with someone” and the different uses of “with” in Latin
9
Are “parvus” and “magnus” the best adjectives to describe the length of a river?
11
Christ or Messiah in Latin
9
Translating -ish and -aster endings
6
A rough comparison of different derivatives of plere
3
What is an umbrella in Latin?
6
Quōmodo rēctē “derivative of f(x)” dīcere?
7
Translating 'Liber'
2
How do I translate this phrase?