How do you say ‘switch’ (noun) in Latin?

I am trying to figure out a good way to express switch in a Latin, such as a light switch or in my case, a figurative switch: a list of boolean selectors to choose from. Creating a nōmen actiōnis seems a good way to start:

Now, I do not know whether my suggestion is a good one (hence why I am asking here). I thought of alternātor, but that would be a poor option, both as it has a specific meaning in modern electromechanics, but also as -or, -ōris is preferred for nōminēs agentis.

Asking here, though, allows for an interesting ‘discussion’,¹ if you will, as English switch has numerous meanings; the following list is from Oxford Dictionary, with option 6 added by me:

Given the numerous different meanings this word has in English, I thought this could be an interesting question to try to provide different answers to. Please state initially in your post which of the above options you are answering (or if something else, please make this clear). Explanations which demonstrate how grammar was used to create the word, will be very beneficial, and if there are any notable examples (classical, mediaeval or modern) for this usage, that will be a great boon. Please do mark long vowels for your selected word(s) for the benefit of future readers.

For clarity, I will restate my question: How do you say the noun switch in Latin? For my case, I am primarily looking for usage(s) that can support alternative 1.1: a program variable which activates or deactivates a certain function of a program, similar to that of a light switch.

1 Generally discussions are not what SE is about. What I mean is of course that I would encourage numerous suggestions, as I think this word can lead to many interesting discoveries of both the workings of Latin – in a Catullan spirit, let us embrace neologisms! – and encourage creative usage and exploration of Neo-Latin.

A common Neo-Latin term for an electrical switch seems to be epitonium (ēlectricum). Epitonium, ‑iī, n (also epitonion or epistomium) is a classical vocable meaning a water cock, i.e., a valve for allowing or shutting off the flow of water in a pipe, by turning it (vertere).

… while it is made so that both warm and cold water flows from the wooden wheel and the table which, as I said, is at the end of the spokes, to every single guest when a cock is turned. (The text describes a peculiar rotating table for entertaining guests visiting an aviary.)

What did a Roman epitonium look like? The Romans were famous for their elaborate water distribution systems, and Roman epitonia have been found in a number of places. Here are two examples from Daremberg/Saglio: Dictionnaire des Antiquités Grecques et Romaines: 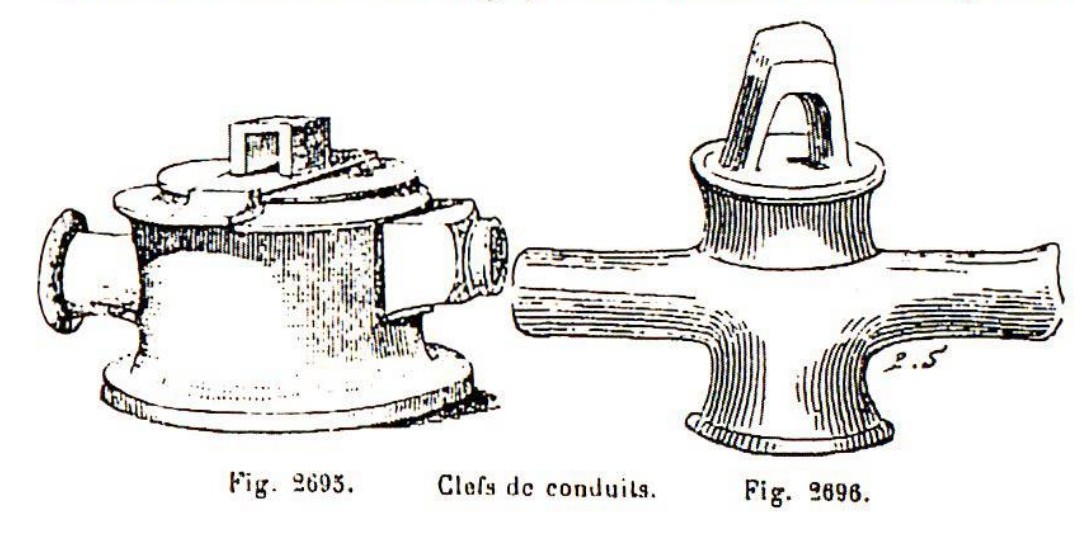 The left one was found in the remains of the palace of Tiberius on Capri (I assume the Villa Jovis).

These cocks are made of bronze and consist of a body with connections to the pipes and a plug (vertibulum, not a classical term as far as I can tell) in the form of a hollow cylinder which was turned to fit with incredible precision and had holes so that water could flow in and out when the hole was pointed toward the water inlet. The vertibulum was topped by a grip called manubrium (attested in Vitruvius) in which the operator could insert a crude iron stick to have a lever. A more detailed discussion, unfortunately in German only and somewhat helvetocentric, can be found here. (Note: This article greatly belabours the point that the “Robinet” from Windisch displayed on the DAGR page I linked above is medieval and does not belong there).

It is easy to see the similarity to an electrical switch, in which a manual action permits or inhibits the flow of something; in that case, electrical charge.

Not the answer you're looking for? Browse other questions tagged english-to-latin-translation neo-latin neologism or ask your own question.