Researching the baptism record of a relative dating from the early 1800’s where Catholic Priests used Latin in documenting the event. I apologize that I am a novice and hope its OK to post, but I have taken lots of time but can’t seem to figure out two words and their meaning (see attached).

I believe their naming or describing family relatives or close neighbors or friends??? Please let me know oif the attached is clear or if need additional info. Thank you for your consideration. 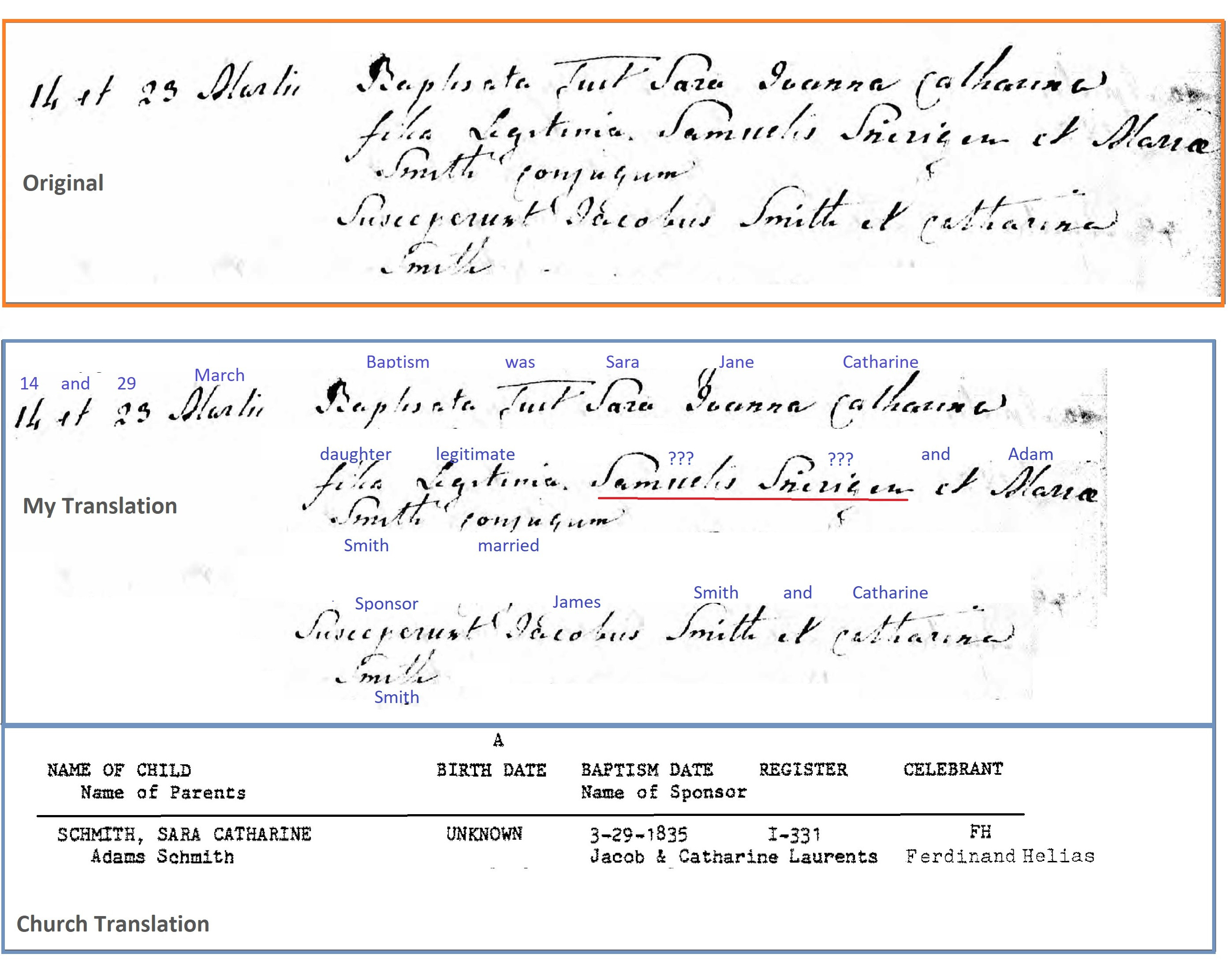 PS Tried to attach full page but it exceeds size limit and if I shrink then resolution will eb an issue. Let me know if you want to see the full page and I can send / or post seperately.

Thank you all for the input, you helped me break a mental block. After your suggestions, I researched further and found another book which had overlapping baptismal events / dates, strange but true. The events were same basic date etc but the name was "Snerigen". I also found the Adam Schmith entry. Thank you again very much.

I would read those words as Samuelis Snerigen. I think the first name is clear enough that it requires no explanation, the genitive "of Samuel".

The second letter of Snerigen does not look like an r nor a u, because this scribe seems to write those differently in a consistent way (see Martii in the top left, and fuit in the top centre. There is nothing else it could be but an n.

The third letter could perhaps be a c, but it looks fatter than his other c's. It looks similar to his neater e's. Since Snc- is not possible, it must be an e.

The fourth letter clearly resembles his other r's.

The fifth letter must be an i, because it is a single stroke. In addition, while the scribe does not dot all i's, there is a dot here, which arguably must belong to this stroke.

The seventh letter looks like a g, cf. the g in Legitima in the second line.

The eighth letter looks the same as the e earlier in this word.

The final letter could be an r in other manuscripts, but this author never seems to use that r. Besides, I think that r is mainly used in older manuscripts than this, or in Germany, perhaps. And the scribe consistently uses a different r. It does resemble the n in *Susceperunt in the line before last, and it has the typical little ending horizontal stroke for a final n or m, so it must be an n.

When you Google, the surname Snerigen seems to exist in the 19th century in America..

P.S. As Dbmag9 says, the word you suggested could be Adam is Mariae, "of Maria" (genitive case).

I believe the words you have underlined are a name: I'm fairly confident the first is Samuelis and to me the second looks like Stringer although I'm less certain about that. I think the word you have identified as 'Adam' is a different name, possibly Mariae: compare the capital letter with the capital letter of 'March' at the start. This would make that part of the text read 'legitimate daughter of Samuel Stringer and Maria Smith, married'.

Not the answer you're looking for? Browse other questions tagged translation-check sentence-translation or ask your own question.