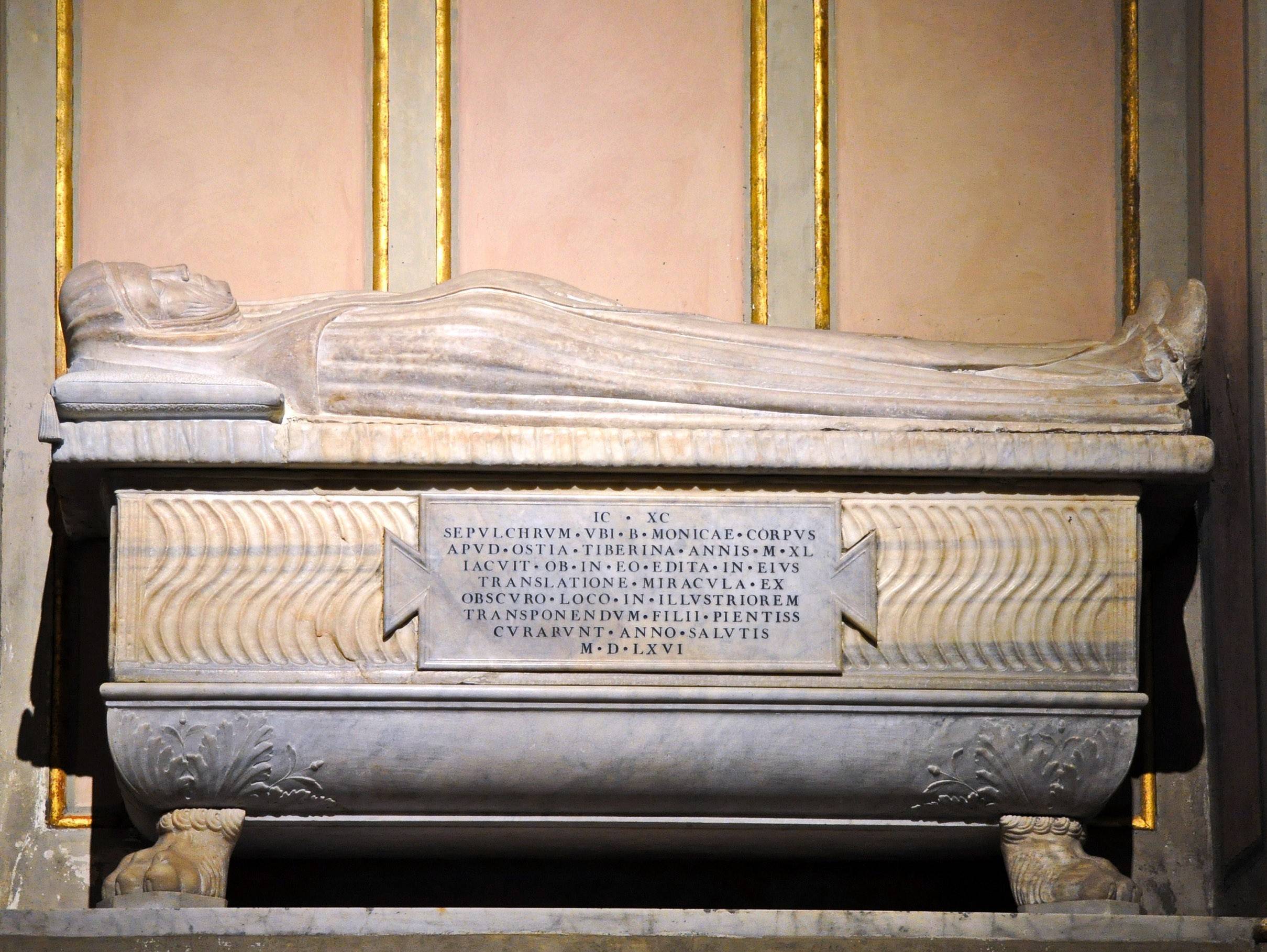 I am trying to translate this sarcophagus. The text is (excluding the Christogram at the top)

I know that some of what's here is abbreviation. For example, B. Monicae is Beatae Monicae, and I'm pretty sure pientiss is pientissimi.

I think I have the first part translated:

The second part I have bits and pieces:

I'm pretty sure that's off since I don't understand what the grammar is doing here. "curarunt" is subjunctive, so given the weird "ob in eo", perhaps it is the verb in a dependent clause, as in "ob curarunt"?

How should this second half be parsed? I'm sure that once the grammar is understood the second half will be pretty straightforward.

I thought some context might help understanding this inscription. Since I knew little about St. Monica, I looked her up on the Catholic Encyclopedia, where I read (emphasis mine):

St. Monica was buried at Ostia, and at first seems to have been almost forgotten, though her body was removed during the sixth century to a hidden crypt in the church of St. Aureus. About the thirteenth century, however, the cult of St. Monica began to spread and a feast in her honour was kept on 4 May. In 1430 Martin V ordered the relics to be brought to Rome. Many miracles occurred on the way, and the cultus of St. Monica was definitely established. Later the Archbishop of Rouen, Cardinal d'Estouteville, built a church at Rome in honour of St. Augustine and deposited the relics of St. Monica in a chapel to the left of the high altar.

With that in mind, we can assume that ob in eo edita in eius translatione micracula means “on account of the miracles performed on it during its transportation.” I assume both it-s refer to the corpus, not the sepulchrum. In eo (just like eius) could refer to either one, who knows… while these miracles are mentioned in numerous places on the Internet, nobody seems to go into any more detail about what kinds of miracles we are talking about.

Note that curare + gerundive means “have something done.”

Oh, and illustriorem of course modifies not transponendum but an implied locum.

In AD 1566 her most pious sons had the tomb in which the body of the Blessed Monica lay at Ostia for 1040 years transferred from its obscure location to a more distinguished one on account of the miracles that occurred on the body during its transportation.

What is somewhat unclear to me is who these sons were; they can hardly have been Monica's literal sons after more than a millennium. Since the church belongs to the Order of Saint Augustine (is, in fact, the order's mother church), and St. Augustine was Monica's son, I assume this refers to the Augustinians.

Not the answer you're looking for? Browse other questions tagged latin-to-english-translation grammar-identification or ask your own question.