I'm having trouble getting all the Homeric pronouns under my belt for purposes of reading comprehension. Just for grins, I wrote a little script that goes through the Project Perseus treebank for Homer and makes a list of every word tagged as a pronoun, and I get a total of 209 of them. That's a lot. Even if I restrict my attention to the personal pronouns, there can be as many as five different words for one person-number-case, e.g., σεῖο, σέθεν, σέω, σεῦ, σευ. Pharr just lists them all in a big table. Dickinson College has a variation of Pharr online.

Normally in languages that have these kinds of inflection systems, I would just learn the paradigm by chanting it, and then gradually ingrain it into my memory through speaking, listening, and reading until it became natural. In Homer, I keep running into a form like σέθεν and having to look it up, because it wasn't the form that I initially familiarized myself with.

Do we know, or are there reasonable conjectures as to, what were the complete paradigms for personal pronouns in the Aeolic and Ionian dialects? I'm thinking that it might make sense to learn these as two separate rhythmic chants. The historical-linguistic stuff seems somewhat controversial (Nagy 2011), but it doesn't really matter too much to me whether a particular historical-linguistic claim is true or false, as long as it gives me a mental framework for gaining fluency.

In cases where we have as many as five pronouns for one purpose, we clearly can't explain that as being the result of Nagy's "Aeolic default," where the Ionic form replaced the Aeolic one except when it was metrically impossible. Why so many in these cases?

As this article suggests, Aeolian forms have sometimes been maintained where the metric would have admitted the substitution of an ionism. I advise you to read it because you will find a list of Aeolian and Ionic pronouns in Homer. On the use of personal pronouns replacing animate or inanimate objects in Homer I advise you to read also this article.

You can find a detailed analysis of the Homeric pronominal forms in P. Chantraine, Grammaire homérique. Tome I, Phonétique et morphologie, Paris 1948, pp. 263-281; more generally, you will find a list of all pronouns in the various dialect forms in C.D. Buck, The Greek Dialects, Chicago 1955, pp. 97-98.

For convenience, I insert the pronoun tables present in the volume of Chantraine. 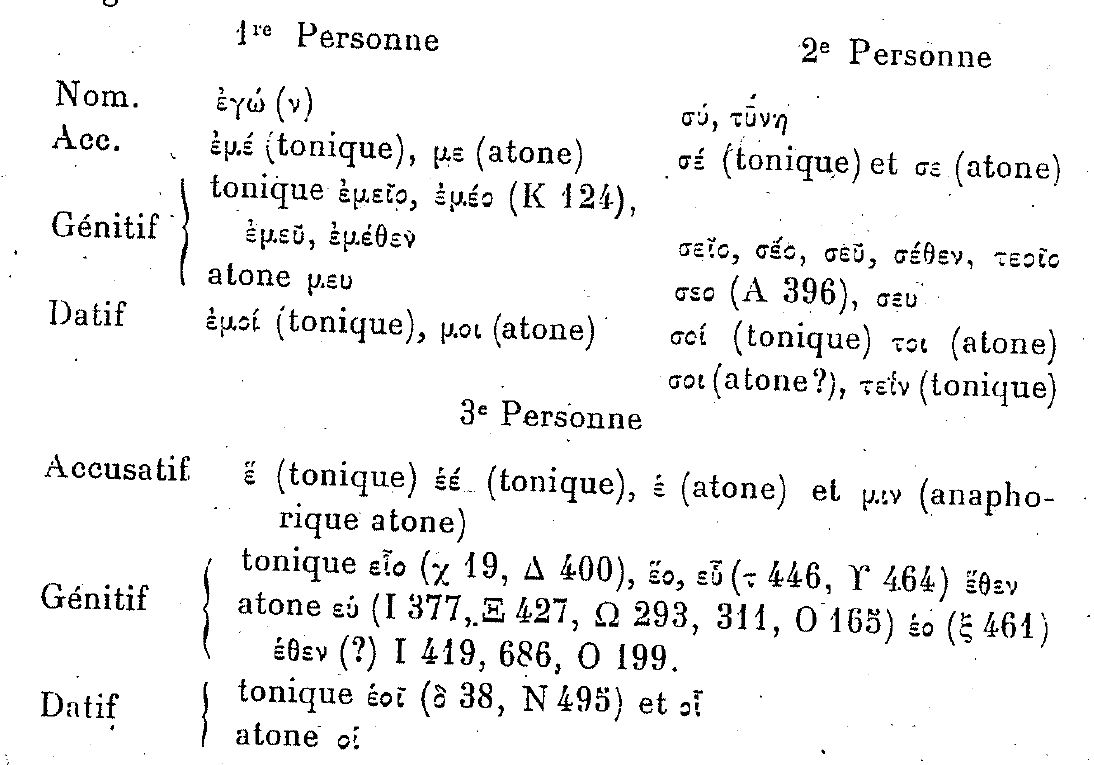 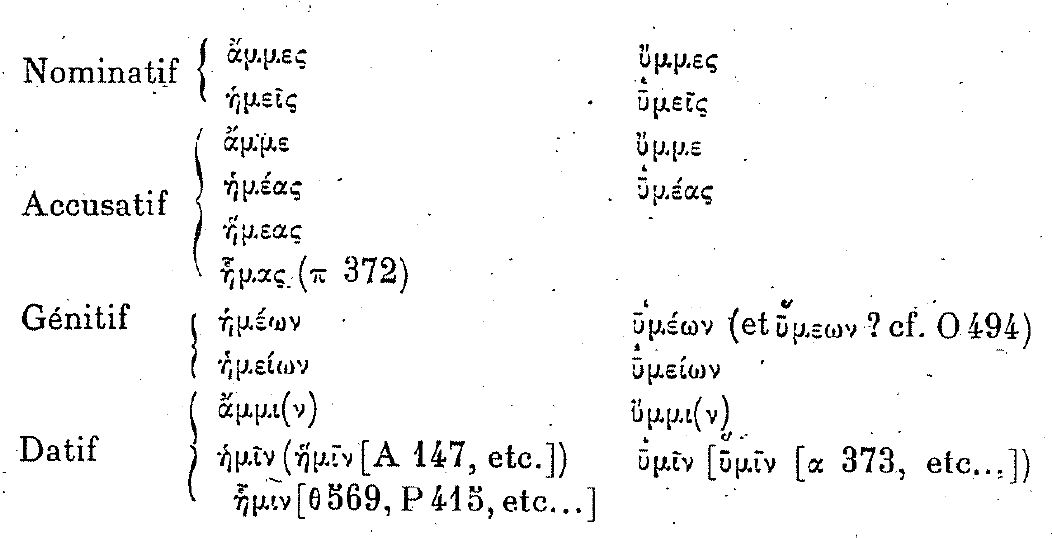 Putting together the info from qwertxyz's answer, Pharr, and pp. 97-98 of Buck (which is on Library Genesis), here's what I was able to work out for the most common forms that would go into a chant for memorization.

Aeolic differs in the plural forms, 1st and 2nd, NDA, where it has ἄμμ- and ὔμμ-; and in the singular genitive, where it has -εθεν.

The unemphatic forms are:

8
Do non-Attic-Ionic dialects distinguish the accusatives of the ἀσπίς and χάρις types?
2
On the etymology of Greek ἄελλα, and the mysterious Hesychius gloss for αυεουλλαι
5
Do Aeolic and Ancient Greek have other examples of τ/π (πέντε / πέμπε)?
4
Omicron sometimes becoming omega in conjugation of ἀπόλλυμι
4
Frequency of conventions regarding whether to pronounce ω more open than ο, more closed, or the same