Which is correct? Eugenius or Eugenīus or both? 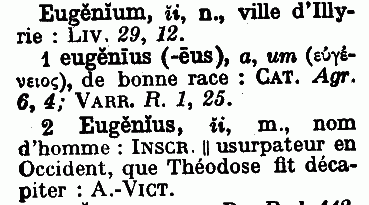 Checking the dictionary entries for Eugenius, I was surprised to find different vowel quantities depending on whether it was the adjective or the noun. As you can see from the screenshot above, Gaffiot lists three options:

I have no problem understanding why in number two we get a long vowel, given its Greek origin; there are numerous other examples of the same kind of monophthongisation giving long vowels, such as πλατεῖα → platēa. What I am suspecting, is that this is a case of words that happen to look similar, but in fact are of different roots, thus giving the different vowel quantity. Be that the case, then the answer to my question would be ‘both’; be that not the case, then one of the two options are incorrect. Given the precision with which Gaffiot presents the entries, I highly doubt there to be an error, and so would greatly appreciate the input of this community on this: What is the cause of the different vowel length in these entries?

A note: I expect that dictionary entry 2 Eugĕnĭus (entry number 3 in the list) is formed from the place name Eugĕnĭum.

Though Gaffiot claims the adjective eugenēus is borrowed from Greek εὐγένειος, I find that hard to accept on semantic grounds: εὐγένειος means 'well-bearded' (in the case of men) or 'well-maned' (in the case of lions), not 'well-bred'. I (and Lewis & Short with me) think it much more likely it was instead derived from εὐγενής, which means the same thing as the Latin. The Greek adjective is in the third declension, but it's been converted to the first/second in Latin; it's not unusual for words to change declensions when borrowed if they don't seem to map cleanly to Latin paradigms. The long e in the Latin (a violation of the usual rule that vocalis ante vocalem corripitur) is an attempt to preserve both the long η and the location of the accent of the Greek original.
The later variant eugenīus must be seen as either an error by some scribe who may have had enough familiarity with Greek to be aware of the large number of adjectives in -ιος but not enough to recognise the original etymon, or as evidence of η beginning to merge with /i/ (itacism or iotacism, a sound change that happened during the Koine period; the initial Latin borrowing must have happened before itacism took place, though, since itacism postdates the loss of contrastive vowel length in Greek, but Greek bilingualism was common enough in Rome that it could have contaminated the borrowing (which was a rare and fancy word anyway) afterwards).

The name Eugenĭus is from the Greek Εὐγένῐος. Its first two morphemes (ευ- and the root ‑γεν-) are the same as in εὐγενής, but instead of using the adjectival suffix ‑ης it has that different adjectival suffix ‑ιος, which has a meaning more like 'belonging to'. The (minor) difference in meaning is effectively that someone who is εὐγενής is well-born himself, while Εὐγένιος comes from a noble line.
The point is that the i in Latin is short because the ι in the Greek is short.

Eugenium must reflect Greek Εὐγένιον, the neuter of Εὐγένιος, with the same suffix with the short ι in it. The name Εὐγένιος won't be derived from the place; it's possible the place was named after a person, though it could well be an independent coinage.

Not the answer you're looking for? Browse other questions tagged etymology names vowel-quantity ancient-greek monophthongisation or ask your own question.

9
Which is the logic behind "Aloysius" Latinisation?
12
Etymology and pronunciation of words ending in “-iasis”
4
Which vowel combinations contract?
8
Is the U long or short in the forms ussi and ustus of the verb ūro?
3
On the origin of the name "culture" ( possible confusion between "cultura" and "cultus")
7
What is the etymology of "chorāgus"?
9
Which name came first, Lucius or Λουκᾶς?
6
Latinisation of a surname. Seeking advice from expert Latinists
5
Does vowel quantity ever change in the root of a word during conjugation?
7
What is the correct vowel quantity for the participle of legō?