Working my way through the Duolingo course, I noticed that salsus has a short root vowel, even though sāl, sālis¹ is long-voweled. The etymology entry on Wiktionary states that the adjective is from either the noun mentioned, or from saliō (salīre, saliī, salītum), but that only makes me wonder even more: How come the verb was shortened as well? The verb itself is listed as coming from sāl.

My first hunch was that we were dealing with a sort of iambic shortening, but why then wasn’t the noun shortened? In short, nothing that I know I know explains this, so my question thus goes to this knowledgable community: Why are the root vowels of the adjective and noun derived from sāl shortened?

¹ This is in error; it is sāl, salis. I added this note to avoid confusion.

As has been pointed out, it's the long vowel in the nom. and voc. sg. of sāl that requires explanation, not the short vowel everywhere else, and it doesn't look like we have a good consensus.

Sihler, in his New Comparative Grammar of Greek and Latin, calls it "an enigma". He holds that sāl continues earlier *sall and ultimately Proto-Indo-European *sals, both with short *a, which is also what is seen in Greek ἅλς; as such, the long vowel could be a result of compensatory lengthening, but then it's hard to see why par < *parr < PIE *pars and vel < *vell < PIE *welsi don't exhibit it. (In fact pār does have a long vowel in the nom. sg., and actually exhibits the exact same length alternation sāl does; I'm not sure why Sihler thinks it doesn't.)

De Vaan, in his Etymological Dictionary of Latin and the other Italic languages, instead holds that the paradigm of sāl continues PIE ablaut directly, with a nom. sg. *seh₂-l-s and an acc. sg. *sh₂-el-m (De Vaan, of the Leiden school, doesn't reconstruct PIE *a): 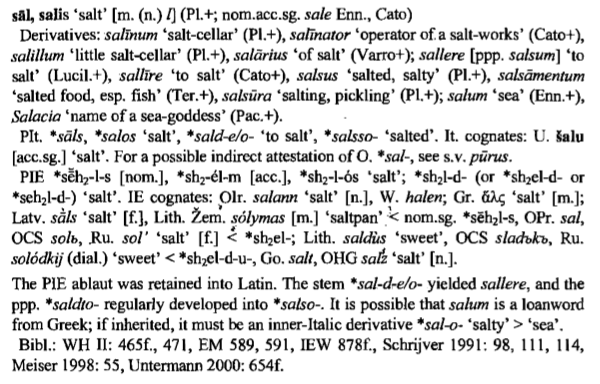 As far as I can tell Latin would be alone in preserving this alleged ablaut (Greek ἅλς, as said, has short vowels across the board), and it's also not at all clear to me why, in this presumably proterokinetic word, the accusative singular would be weak.

On balance, I think the most parsimonious view is that the long a in sāl is due to compensatory lengthening because of the loss of the original final *s, and if this seems irregular it's only because it happens to be the only word reflecting earlier *-als—I can't think of any others, at least. (Animal and tribunal do not.)

The stem of sāl is săl-. This is documented in many dictionaries, including Lewis and Short. Most derivatives are taken from the stem of the noun, not the nominative.

The only outlier with respect to vowel quantity is the singular nominative of the noun. The question should rather be: Why is it long?

If we accept the noun (sāl, sălis) as a starting point, the short ă in derived words comes from the noun itself.

Not the answer you're looking for? Browse other questions tagged etymology derivation vowel-quantity or ask your own question.

20
Why do we learn the genitive singular of each Latin noun?

7
Short vowels in lucubrando
13
Does mentula ("penis") derive from the same root as mens ("mind"), and if so why?
8
Is the U long or short in the forms ussi and ustus of the verb ūro?
4
In ancient Attic Greek, how (un)stable were "ΝΣ"/"ΝΖ" and preceding vowels?
3
How does drawing circles with a compass explain the etymology of 'universe'?
5
What is the evidence for a long vowel in χριστός "anointed" and Latin Christus?
7
Did Latin ever have a rule of lengthening vowels in monosyllables ending in /s/?
9
How did PIE *h₂énti-h₃kʷós get lengthened to Proto-Italic *antīkʷos?
5
Does vowel quantity ever change in the root of a word during conjugation?
4
Which is correct? Eugenius or Eugenīus or both?