The automated teller machines in Vatican City show this screen when awaiting a card: 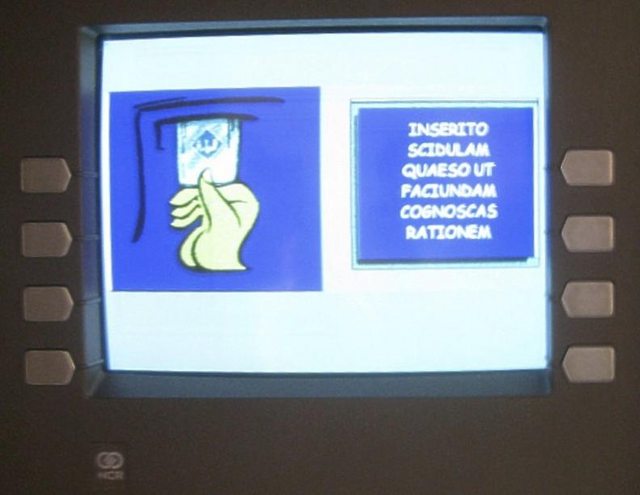 Could someone, quaeso, break this down word by word? There are a number of things here that I find puzzling or surprising:

When I first saw this text it too struck me as unclear and unnatural. The first problem has since been resolved, the second however remains. Another reply mentions Foster himself translating it as 'Insert your card--scidulam--so you can access the operations allowed.' - that's certainly not an exact rendering of what the Latin says, which is instead:

"I kindly ask that you then insert your card in order to learn what approach needs to be done."

From this follow my observations that will simultaneously try to answer the questions:

My own rendering of 'Please insert your card to receive further instructions' would be:

Notice the genitive nd-noun ("gerund") instead of the nominative nd-adjective ("gerundive") - this might be what Foster was going for, but he confused the two verbs and consequently the two constructions. Paradoxically enough I feel that this is the least marked word order in this case, since agendī ratiō is a single, quasi-compound noun phrase, quite regularly so when it comes to generic-reference objective genitive expressions - indeed, (Spevak 2010: 99 & 182) concurs that "genitives with generic referents [...] are often pre-nominal" and "objective genitives coming last are semantically prominent".

As for translating 'so you can access the operations allowed', I think I'd be stretching the idiomatic resources of Latin and/or my knowledge of its financial jargon, but I think this would be sufficiently clear:

The source of this Latin ATM message, as confirmed is a few profiles (such as this one from the Catholic Herald and this one from The Telegraph) is the lately-deceased Reginald Foster, who was arguably one of the greatest Latin speakers of the past century.

The elevator whirred quietly to the top floor of the Apostolic Palace, and Foster led us through a warren of stuffy rooms, pausing in a hallway before an ATM machine operated by the Vatican bank. "I wrote this," he said. "Hee, hee, hee." The instructions on the screen were in Latin: "Inserito scidulam quaeso ut faciundam cognoscas rationem." He translated: "'Insert your card--scidulam--so you can access the operations allowed.' It's baby talk, really."

My own more literal translation:

Please insert [your] card so you may find the procedure to be done.

As for your specific questions:

The message is indeed hard to parse because of the broad meanings of ratio, facere, and cognoscere. I am not sure whether there can be a very solid and authoritative answer, so I will just share my view.

All in all, I interpret the meaning to be roughly: "Please insert card to know what transaction can be done." It requires a bit of charity and puzzle solving to get there.

I think it is very tempting to have congnosco to denote an active action that the user should do. So my guess it can be rendered identify or more freely on the context select.

I read ratio faciunda as method of operation (method to be done). So the user is required to insert the card so that he can select a method from several options.

But I admit I'm uneasy with this interpretation of congnosco. Maybe we can have a more natural cognosco with learn/become acquainted with the method/manner of the operation: i.e., how to use this machine.

Not the answer you're looking for? Browse other questions tagged vocabulary contemporary-latin grammar-identification or ask your own question.