They say taking a walk over a cemetery inspires you to ponder the big questions. I have definitely found that to be true, as I recently came across this inscription on a local graveyard: 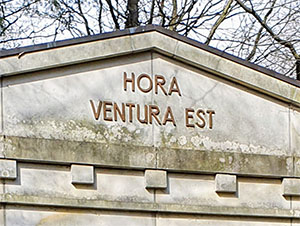 According to Messrs. Allen & Greenough, “the future participle is chiefly used with the forms of esse (often omitted in the infinitive) in the active periphrastic conjugation.” That makes a lot of sense for those infinitives and subjunctives (although some of these uses cases certainly belong to the more esoteric corners of Latin grammar).

But what if it is used with a plain present finite form? A & G give the following example (Cicero, Tusc. 1,111):

Here, the constructions clearly competes with the ordinary future tense. I think Cicero could just as well have written: … in caelum adscendes.

What is the difference? Does the future participle convey a certain nuance, does it carry a certain connotation that the simple future tense does not?

In A Grammar of the Latin Language, Karl Gottlob Zumpt says,

But by the combination of the participle future active with the tenses of esse a really new conjugation is formed denoting an intention to do something. This intention may arise either from the person's own will , or from outward circumstances, so that, e. g., scripturus sum may either mean “I have a mind to write, or I am to write," or "I have to write.”

One of the more useful explanations concerning this that I found is from Johann Philipp Krebs' Guide for Writing Latin:

A future action can be represented, either prophetically, as one still uncertain, whether it be considered as still continuing, or already completed, e. g. I will write or be writing to you (scribam); when I shall have written to you, (scripsero), you will understand (cognosces) everything definitely; or it can be so represented, as also to signify that preparations have been made to perform it, and give it a real existence. For this the Latin uses the participle in urus, combined with the verb sum, because this participle denotes one who is destined to something by fate, is to be or do some thing, is willing and inclined to do it.

In many cases, the distinction may be subtle and difficult to translate. However, it's good to keep in mind that, with the future periphrastic, the tense is indicated by the auxillary verb and therefore the emphasis lies with the time indicated by that tense (rather than the future relative to it) and the conditions conducive to whatever is to take place afterward.

For example, in "Hora ventura est", the expression draws one's attention to some present condition which insures that the hour will in fact come. Although many grammars speak of intention, the condition in question may often be something impersonal. In this case, fate or destiny may be what is intended, as in "The hour is bound to come."

This idea was expressed well by Charles Fries, in his article "The Expression of the Future":

The suggestion, then, which I should offer as the means of accounting for the facts which we find concerning the expression of the future is this. The grounds upon which the future is usually predicted are desire, hope, intention, resolve, determination, compulsion, necessity, or possibility. Any locutions which express any of these ideas related to the future may be taken up and developed as future tense signs.

As Allen & Greenough (§499) points out, one nuance that this participle can express is 'likelihood or 'certaintly.' Sometimes, this certainty is so strong, that it even seems to approach inevitability or 'destiny.' One example that comes immediately to mind is letter 6.16.2 of Pliny, the first of two letters to Tacitus about the eruption of Vesuvius:

The periphrastic future tenses are often used to convey the subject’s intention at the time of the auxiliary verb.

venturus sum = I intend to come

venturus eram = I was intending to come

But you are right in that is can also be used as equivalent to simple future.

Not the answer you're looking for? Browse other questions tagged grammar-choice participle future-tense or ask your own question.