What is the relation and history of 'si' and 'sic'?

Lewis and Short tell me that sic comes from si by adding the particle -ce. I can understand sice wearing down to sic, but I do not quite understand how I am supposed to understand the meanings of the words.

The meanings of si ("if") and sic ("so") seem pretty far. If I am interpreting those dictionary entries correctly, si is a form (locative, ablative, or something) of an extinct pronoun related to the Greek articles starting with h-. Forms of pronouns fossilizing into adverbs or conjunctions or particles makes sense to me, but I am not sure if I understand things correctly.

Here are explicit questions whose answers would help wrap my head around the matter:

Feel free to answer any subset of the questions you like. I can split the rest into a follow-up question once I know which way to continue.

Here is de Vaan's entry for both forms: 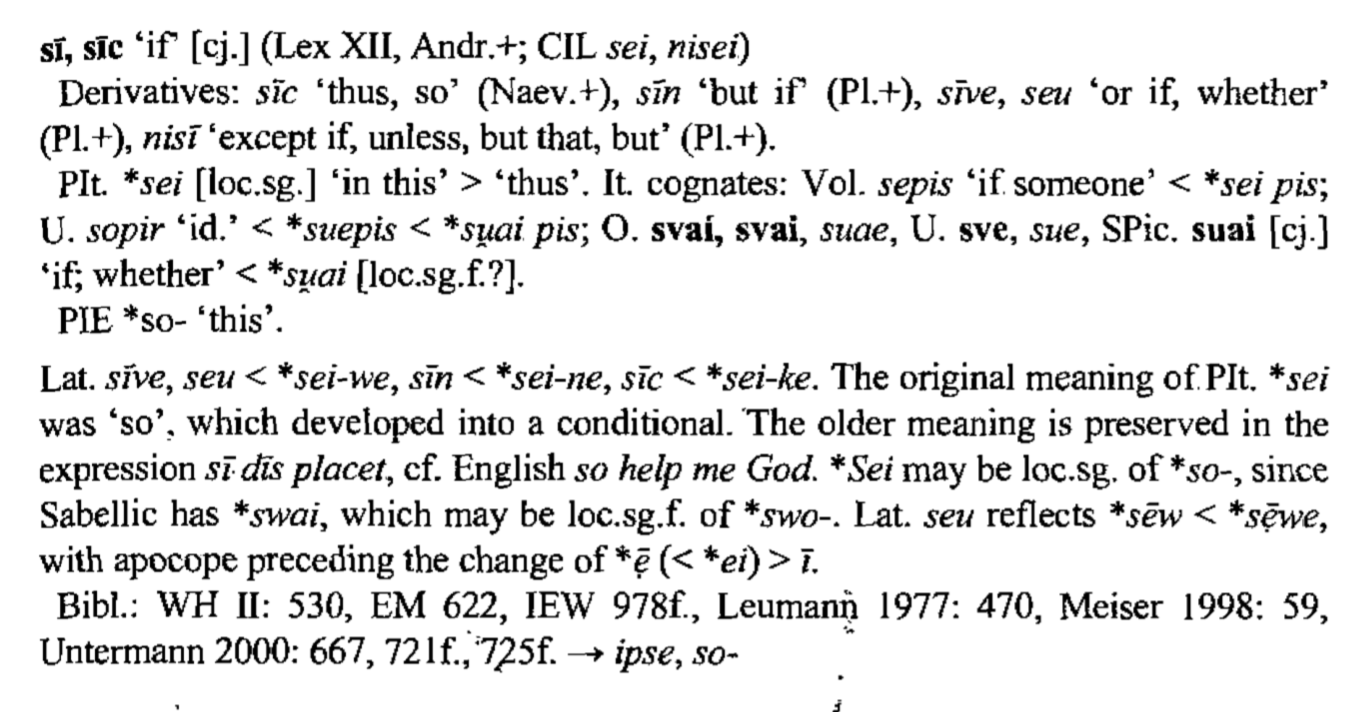 By this account (which I think is uncontroversial), both forms come from the locative singular of the demonstrative *so- "this", with an added enclitic *-ke in the case of sīc. This enclitic is the same form that shows up as -c, -ce in demonstratives like hi-c, huius-ce, etc., as well as some other words like nun-c, ce-do; it seems to have had (redundantly in many of its uses) a general proximal deictic meaning such as "this, here, now".

The semantic starting point is "in this (case)". For sīc, the shift from "in this case" to "in this way, thus" seems easily understandable. For sī, the grammaticalization to a conditional presumably took place in contexts like "In this case, namely X, Y will happen" -> "If X, Y".

Not the answer you're looking for? Browse other questions tagged etymology word-comparison language-evolution pronouns particle or ask your own question.

13
How did mundus come to mean both world and clean?
6
Where did the missing forms of nemo go?
14
What is the optative?
5
Why do some pronoun nominatives look like vocatives?
8
Active perfect stem conjugation and forms of esse
2
How did "djēm" avoid palatalization?
7
Dies and the fifth declension
5
What is the origin of the deponent verbs and their evolution in Romance languages?