How does "ad-" work in adduco and allego?

I'm grappling with the prefix ad- in Latin. I don't know why, but I can't pinpoint its meaning. Or it just feels redundant. Here are some examples of my befuddlement.

Allege is related to law, legal, legislation, legation, and litigation. Its original source was Vulgar Latin *exlitigāre, which meant ‘clear of charges in a lawsuit’ (from ex- ‘out of’ and litigāre ‘litigate’). This developed successively into Old French esligier and Anglo- Norman alegier, from where it was borrowed into English; there, its original meaning was ‘make a declaration before a legal tribunal’. Early traces of the notion of making an assertion without proof can be detected within 50 years of the word’s introduction into English, but it took a couple of centuries to develop fully.
The hard g of allegation suggests that though it is ultimately related to allege, it comes from a slightly different source: Latin allēgātiō, from allēgāre ‘adduce’, a compound verb formed from ad- ‘to’ and lēgāre ‘charge’ (source of English legate and legation). 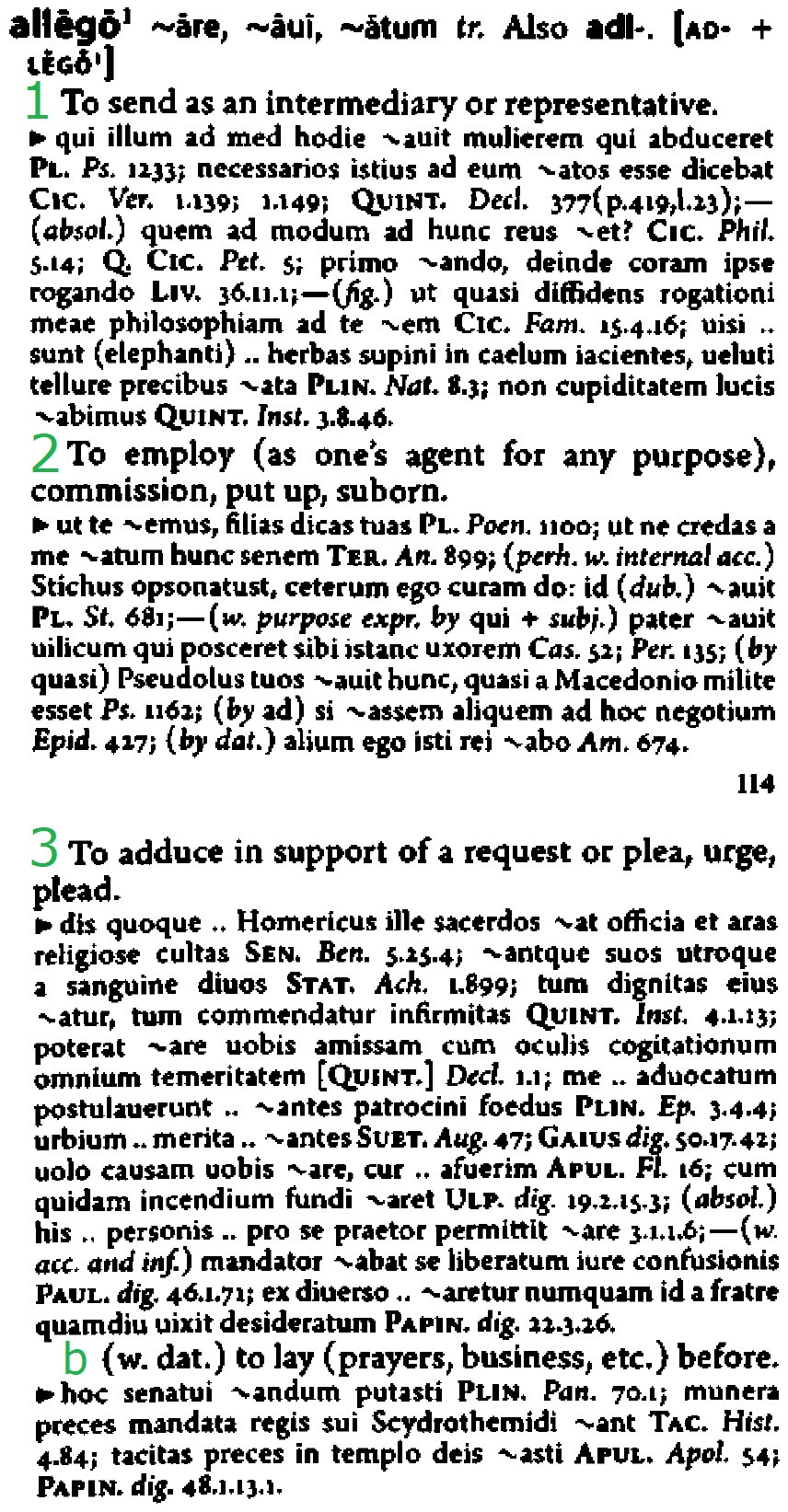 Isn't the "ad-" in allego redundant? As one of allego's meaning is adduco that's already prefixed "ad-", the ad- in allego would be a second ad-.

No, and you're simply misreading Ayto.

The hard g of allegation suggests that though it is ultimately related to allege, it comes from a slightly different source: Latin allēgātiō, from allēgāre ‘adduce’, a compound verb formed from ad- ‘to’ and lēgāre ‘charge’ (source of English legate and legation).

He says the meaning of allego, -are is (which should always be read as "is an approximation to") the English word adduce, not the Latin word adduco, -ere. He is not saying the word adducere is embedded in allegare.

Likewise, the OLD says that adduce, not adduco, -ere, is a potential meaning of alleglo, -are.

Even besides that misreading, you can't really claim that the ad- is redundant. If two words are synonyms, they're synonyms in full. If we imagine for one moment that allegare = adducere, it's because ad + legare = ad + ducere. The units are indivisible. If you remove one ad-, you no longer can balance the equation.

If you were to look up go on in the thesaurus, you'll get "go ahead" listed there. Wait! you might think, isn't the 'go' redundant? Clearly "on" and "ahead" aren't completely synonymous, and "go" itself doesn't really get across all the information you need.

If you're in a meeting and someone hesitates, but you want them to keep speaking, you could say, "go on" or you could say "go ahead," but you can't leave any of that out, otherwise it doesn't have the same meaning.

The reason I use synonyms, too, is that that's essentially what these dictionaries are. They don't always define the word, as you would define an English word in an English dictionary, but give a variety of possible words that would work in translating the original.

8
Word or morpheme for “middle” or “not above or below”, as opposed to “super” and “sub”?
7
Choosing between the prefixes e- and ex-
2
What does the prefix 'ab-' mean in the Latin verb 'abundare'?
7
What is the meaning and origin of the "se-" prefix?
6
What does con- in "conceptus" mean? How does it relate to "a thing conceived"?
5
What exactly does the prefix 'in-' signify, in 'impartire'?
4
How did "dis-" contribute to the meaning of "directus"?