Who minted this Roman coin, celebrating the sentencing of Vestal virgins? 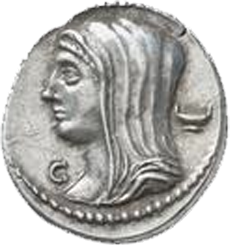 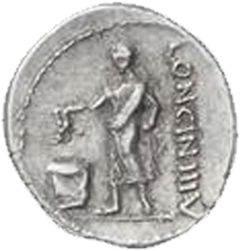 This coin is part of a presentation done by University of Glasgow in relation to a seminar on coinage and numismatics. The coin is introduced in a video done by the Hunterian Museum, and I have found some further information on the coin via Dartmouth.edu. Three symbols are present: The Vestal virgin herself; what looks like the letter ‘C’; and a vessel, looking like an oil lamp. Dartmouth explains them as such:

Obverse: Veiled female bust facing left, likely representing a Vestal Virgin. Behind, a shallow vessel with a short base and two upright handles, identified as a culullus. Previously she has been identified with the goddess Vesta, but her headdress and culullus link her with the only permanent female priesthood in Republican Rome. The lack of descriptive legend makes identification more difficult and infers that the ancient Romans would know what was being represented.

(As a note: THM does not agree with Dartmouth on whom is being depicted; THM states it is the goddess whilst Dartmouth specifically denies this, as per the above.)

The Hunterian Museum does not detail anything about that which looks like a letter, and the coin demonstrated in the video, does not have the C-like symbol, but rather something that I at first thought was a phallos (which would make sense, considering the scandal for which they were convicted and sentenced to death), but (considering what is written at Dartmouth) must rather be an ‘L’ (v.i.). 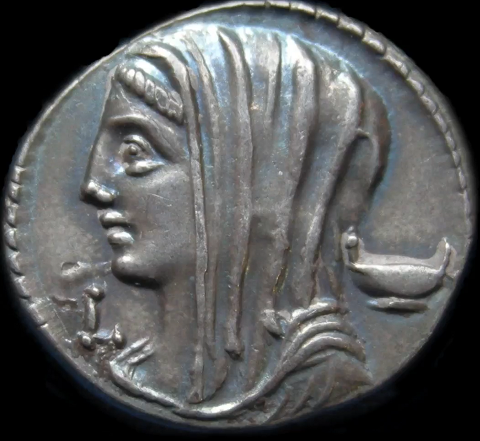 Reading further at Dartmouth, they tell the following:

Based on the coin seen at left, tentatively minted with the same pair of dies, the lower left edge of the obverse field can be reconstructed and the mint mark can be determined as a C. The known mint marks of these coins use the letters of the praenomen and nomen of the tresvir monetales responsible for the minting: L C A S I.

Are the minters’ names lost to history, or do we know whom they were? Further, how common was it for them to identify themselves at this time, and would the general population be able to understand and identify the minters? They would hold quite a lot of power, given their official function as basically imperial houses of propaganda, and as far as I understand, by the time of the late Republic, we know more about these officials.

The triumvir monetalis (not tresvir monetales, as the Dartmouth site writes – that is gibberish) responsible was L. Cassius Longinus. His name and job title is on the reverse in big fat letters.

I believe the single letter on the obverse is a “control letter” or die mark. It is my understanding that the purpose of these marks – sometimes letters, at other times graphical symbols – which were very commonplace on republican coins, is not well understood and may have varied, but it probably had to do with the internal organisation of the mint. It may have had the purpose of preventing or tracing fraud and counterfeiting. All the Dartmouth site is saying is that for this particular coin, only the letters L C A S I have been found, and it certainly looks like they may have been taken from the name of L. CASSIUS.

Not the answer you're looking for? Browse other questions tagged roman-culture numismatics roman-republic or ask your own question.

18
How did Roman babies talk?
11
Why did Roman children call their father 'tata' instead of 'pappa'?
9
Is *Numidius* an Ancient Roman name?
11
Do Roman numerals stand for something?
9
Hypocorism/diminutive name forms in Roman antiquity/Latin?
2
Was the Roman concept of "imperium" influenced by Plato?
5
How did dogs and wolves compare in the Roman mind?
5
Were iuvenēs expected to squander the family fortune?