@Mitomino points out in this comment that my understanding of what modifies what in the sentence shown below from De Bello Gallico (VI.4.3) is mistaken. I'll diagram my understanding below. Can you show me my error?

Also, there is a theoretical question at stake here: Does this sentence have an ablative absolute that connects grammatically to the rest of the sentence?

Notation: When A and B are connected directly by a line, and B is higher than A, then A modifies or supplies a parameter for B (such as an object for a verb or preposition). An arrow connecting two words A⟶B means that A's grammatical form agrees with B. For an example, see this answer. The notation doesn't distinguish between predication and restriction.

Translating literally, I get a pretty natural English sentence with an absolute construction:

One hundred hostages having been levied, Caesar hands them over to the Haedui to be watched over.

Background (as I understand it—this could be wrong): The Senones had recently revolted, or at least failed to obey Caesar's command, but they had to give up their plot when the Romans showed up. They then sent legates to the Haedui, long-time allies of the Romans, to plead with Caesar for leniency on their behalf. Caesar happily granted it because, as explained in the previous sentence, he wanted to fight wars, not conduct inquisitions. The sentence at hand informs us for the first time that Caesar had taken hostages from the Senones, and also that he returned them—but to the Haedui. I gather from the verb imperatis that Caesar had not taken the hostages directly by force; he must have ordered that the Senones yield them and they complied—all of which I've tried to suggest by rendering imperatis as "levied".

So, as I understand it, obsidibus imperatis centum is grammatically disconnected from the rest of the sentence, as is normal for an absolute construction. Hos refers to obsidibus but only in the same way that a pronoun can refer to an antecedent noun in another sentence; it does not agree with obsidibus grammatically. "Them" in the English sentence works the same way.

Not shown in the diagram is that centum could modify hos: "Hostages having been levied, Caesar hands over these hundred…" I don't think this affects the analysis above, mutatis mutandis. I take this to be the sort of ambiguity that flies around all over the place in language and no one notices because either interpretation results in the same meaning.

It appears that there was some semantic misalignment regarding "grammatically disconnected". I just meant relations of modifiers to what they modify and objects to words that take objects—the kinds of relations shown in the diagram. I meant to exclude the relation of pronoun to antecedent or two nouns designating the same thing.

As I understand the concept of absolute construction (at least in Latin and English), it is defined as a phrase that, when diagrammed in a sentence as above, has no lines connecting it with any words in the main clause—"grammatically independent of the main clause" as it's more commonly put. Is that right, or is there some basis to doubt it?

Cerberus has pointed out that there is a stylistic "rule", i.e. a guideline regarding elegance, not to refer in the main clause to any nouns in the ablative absolute. Did the stylistic rule cause semantic confusion? (I understand a definition not to be a "rule" but simply a way of distinguishing a topic of interest.)

The answers have given me lots of think about regarding how predication happens in this sentence and in Latin generally. I'll try posting more about that in other questions.

Absolute means "syntactically unconnected to the rest of the sentence except as an adverbial adjunct to the praedicate". The real issue here is, I believe, not whether the ablative is absolute (it is); but the sentence violates a stylistic rule that we have learned:

The head of an ablative absolute may not refer to the same entity as does another constituent in the sentence, especially not if the constituent is pronominal, or it would be unnecessary and verbose.

I must say I was surprised to see Caesar's violating this rule. Cf. the two sentences below:

The reason behind this 'rule' is that the ablative absolute is redundant in the original version, because we can easily connect the head noun (obsides) with the main praedicate (tradit), as a direct object (second version). Redundancy, and a kind of unnecessary repetition of a reference, is what I believe motivates the rule.

I said I was surprised, because I believe you will see the second version in most classical writers wherever possible, not the first one. Perhaps Caesar is an exception?

Here is an analogy in English:

I have to say I would prefer the second version; I only use absolute constructions when there is no other option, and he seems redundant.

Does this sentence have an ablative absolute that connects grammatically to the rest of the sentence?

As Joonas has already pointed out, this question can be answered/interpreted in different ways. He is fully right when saying that the relevant answer depends on how you understand the informal notion of "grammatical connection" (?). Of course, hos (accusative) does not grammatically agree with obsidibus (ablative) but at the same time it is obvious that there is a coreference between them. How should grammar encode this kind of coreference? Well, it depends on what your favorite architecture of grammar is. Perhaps I'm wrong but I infer that you're not interested in these theoretical issues here but rather in the question: is this example problematic for the definition of Ablative Absolute (AA)? Well, tell me which is your favorite definition of AA (see Cerberus's post) and I'll give you my answer. Here are some additional examples from Caesar that could be said to be problematic for some typical definition(s) of AA. In fact, I ordered the next examples according to how problematic they can be according to some typical definitions/descriptions of AA.

The most problematic examples have been said to be the ones that involve a coincidence of subjects (subject of AA and subject of main clause). Here a participium coniunctum would be expected: i.e. coacta equitum milia recensebantur. Unsurprisingly, this type of AA is the most infrequent one (even in Caesar's works). The next problematic type is the one that involves that the subject of AA corresponds to a (null or not) direct object pronoun in the main clause (see Cerberus's answer for the expected participium coniunctum variant). And so forth.

Next, let me tentatively address the tricky question raised by tony in his comment on Ben's answer to a previous post: namely, WHY is the violation of the (typical) AA rule allowed in the example at issue here? I.e., why did Caesar prefer to use the unexpected AA construction rather than the expected participium coniunctum (cf. Cerberus's answer)? It could well be the case that these apparently problematic examples turn out to be acceptable when they help to preserve the well-known strongly topicalized/unfocused nature of AA, which is not so marked in the alternative construction with a coniunctum participle (cf. the left-dislocation structures in Romance languages, which typically involve an explicit resumptive pronoun or an implicit one (so-called pro in formal syntax)). So it could be the case that the explanation must be sought in the realm of so-called information structure. Note that this explanation could account for the abovementioned fact that examples like Coactis equitum milibus VIII ... haec... recensebantur are the most infrequent ones. Why? Because of the well-known unmarked topic nature of subjects.

This said, let me add that I agree with Joonas when saying: "The hardest part to grasp diagrammatically is — to me — the roles of tradere and custodire". I find his intuition very interesting. According to him: "the "verb" is custodiendum tradere with the object hos and the gerundive conforms to the form of the object". I can imagine that some/many of you will wonder what he means by saying that custodiendum (sic) tradere is a "verb". Well, for me Joonas's intuition makes sense if we analyze custodiendos tradere as a complex predicate. I'm afraid that I did not express my first thoughts on this kind of complex constructions very successfully in this related question. Let me tell you that I'm still trying to understand if it makes sense to draw a grammatical/syntactic distinction between Ben's example above, where custodiendos is optional, and the following example from Nepos, where the gerundive is compulsory (let me tell you that the difficult issue here is, of course, not how to understand/paraphrase/translate these examples but how to analyze them). I could be wrong, of course, but my intuition is that the next example involves a sort of so-called "dominant part. construction", whereas Ben's example above does not. For more discussion on this distinction, please see this link.

As you can see, there is a non-trivial syntactic parallelism between AA, AUC, and gerundive constructions of the dominant type. We're using different descriptive labels for these constructions but it is important to realize that they share a basic syntactic analysis/pattern.

Does this sentence have an ablative absolute that connects grammatically to the rest of the sentence?

I think it depends on what you mean by connecting grammatically. It is clear that hos means obsides, so the same physical actor plays a role in the AA and the governing structure. I agree with your evaluation, but I recognize that there is room for understanding matters differently:

So, as I understand it, obsidibus imperatis centum is grammatically disconnected from the rest of the sentence, as is normal for an absolute construction. Hos refers to obsidibus but only in the same way that a pronoun can refer to an antecedent noun in another sentence; it does not agree with obsidibus grammatically. "Them" in the English sentence works the same way.

The hardest part to grasp diagrammatically is — to me — the roles of tradere and custodire. I would not say that custodiendos merely modifies hos, but that the "verb" is custodiendum tradere with the object hos and the gerundive conforms to the form of the object. I would also say that it is not that important to be able to always define what depends on what; dependencies need not be that straightforward in all cases. Perhaps like so: 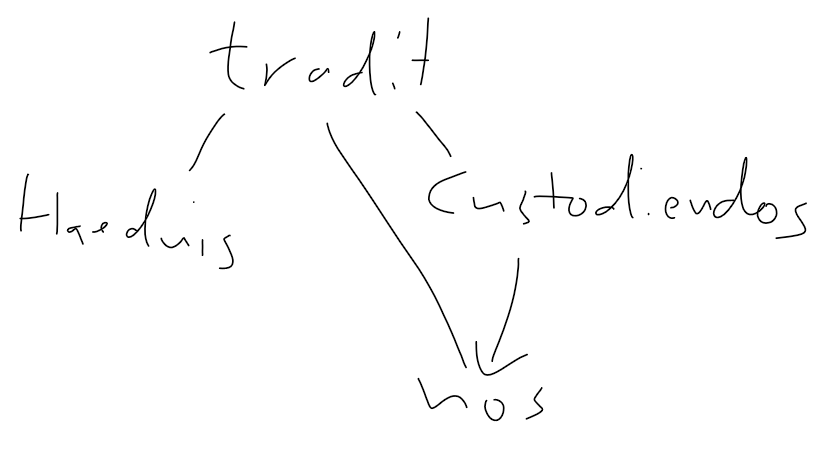 The number centum is indeed ambiguous, and could in principle refer to any plural in the sentence: obsidibus, imperatis, hos, Haeduis. Were all the hundred hostages levied, or were a hundred of the hostages levied, or were there a hundred of them, or were there a hundred Haedui? The differences in meaning between the first three are small. My slight preference is to have it modify imperatis unless there is indication that these were all the obsides.

Not the answer you're looking for? Browse other questions tagged classical-latin grammar-identification ablative-absolute gaius-iulius-caesar predication or ask your own question.

11
Scope of negation with absolute constructions
3
The difference between ablative absolute and a participle coniunctum
4
How obligatory is the predicate in a dominant participle construction?
2
How many types of so-called “predicative Gerundives” can be differentiated in Latin?