The difference between ablative absolute and a participle coniunctum

,which sounds quite close to ablative absolute (AA). If we take the first example of AA in A&G:

and change it to use present participle:

What's the difference? It seems indeed that AA might occur just before the action, and not simultaneously, but I'm unsure how consistent is that. The first example of the participle:

Is switching to AA (not sure how to technically do this in this case) would change something in the tone/stress?

A&G also says "A substantive in the Ablative Absolute very seldom denotes a person or thing elsewhere mentioned in the same clause." (hence it named absolute as being somewhat independent), but judging from the examples, there are not so few (even in the first, as Caesar is implied to accept the letters), where this is not exactly the case or I misread things.

The difference between the present and the passive participle is that:

An ablative absolute can use either. Perfect:

Cibo apparato epulati sumus.
With the food prepared we dined.

Multitudine spectante ad supplicium ducti sunt.
With the crowd onlooking they were led to the gallows.

(Note I used a “with the” phrase in English, which is a good first stepping stone for the translation of an ablative absolute in my opinion; of course in reality you might phrase the English differently, e.g. “now that the food had been prepared” or whatever.)

Now to get to your example:

You want to “switch to AA,” and that is an impossible request. You cannot simply switch back and forth between totally different constructs. That is not to say you could not express the idea and use an ablative absolute in the process; you sure could. For example you could say:

Although that sounds like a really cumbersome way to put it. I would not say it would be a stylistic improvement. Of course you could also say:

But that would not be the same. Now they find the friend not while turning over the corpses, but rather after the corpses have been turned over. Okay, it is not much of a difference in practice, I suppose, but it is different nonetheless.

Diagramming the sentences will make clear the difference between an ablative absolute and a participle. 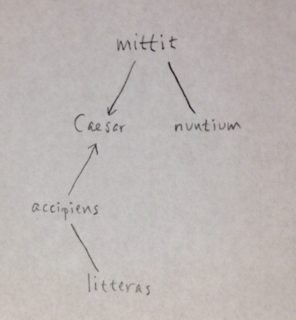 Here is how the notation works. When A and B are connected directly by a line, and B is higher than A, then A modifies or supplies a parameter for B. For example, accipiens is an adjective modifying Caesar; nuntium is the direct object of mittit. An arrow connecting two words A⟶B means that A's grammatical form agrees with B. For example, mittit agrees in number with Caesar; accipiens agrees in number, case, and gender with Caesar.

So, accipiens is a present participle—that is, a verbal adjective—modifying Caesar. That is why accipiens agrees grammatically with Caesar. The word litteras is the direct object of accipiens (in its role as a verb).

There's a very big difference here: acceptis litteris does not connect grammatically with the rest of the sentence! This is the meaning of "absolute construction". The word acceptis is a past participle modifying litteris. But the noun litteris is not governed at all by mittit. Who received the letter? The sentence does not say. Without additional context, we should infer Caesar; additional context might indicate someone else.

Not the answer you're looking for? Browse other questions tagged grammar-choice participle ablative-absolute or ask your own question.

6
Grammatical structure of "Obsidibus imperatis centum hos Haeduis custodiendos tradit"
5
How accurate is the typical definition of a deponent verb?
3
What is the ablative construction at play here?
3
participium coniunctum vs. ablative absolute of transitive deponent verbs

18
Why do we say that an ablative absolute has a participle?
5
Time as a Measure of Separation
6
What forms are the verbs in "Omnibus rebus paratis, Caesar milites naves conscendere jussit"?
7
Can Gerundives be predicates of Ablative Absolutes?
8
Can a "dative of agent" appear in an Ablative Absolute construction (and, more generally, in a non-verbal context)?
3
participium coniunctum vs. ablative absolute of transitive deponent verbs
9
Inveniturne participium futuri activi in ablativo absoluto?
7
Difference between future participle and simple future