For most verbs there are 4 future imperative forms, right? 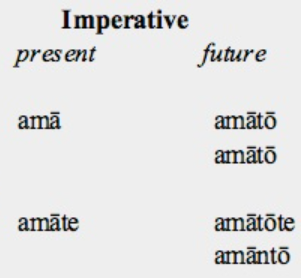 But now I did research on deponents and found following table: 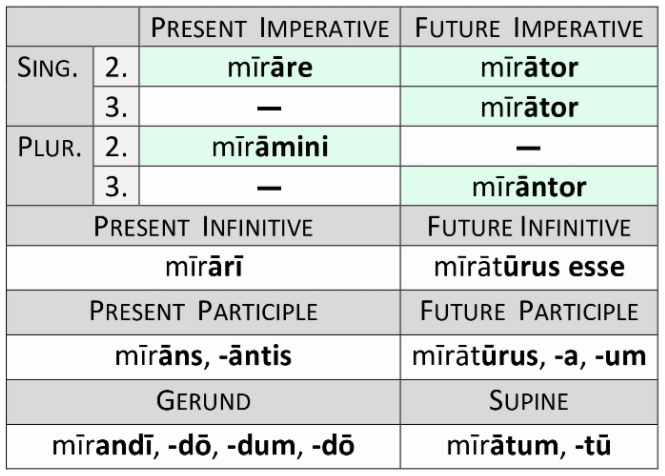 Now my question is if there are really only 3 forms of the future imperative for deponents or is there simply one missing?

Thanks for your answers!

You are right to note that a form is missing. It should be there, as there is no obvious reason why the passive voice (or, more importantly, deponent verbs) should not have it. But according the best current philological understanding, no such form ever existed or, if it did, no ancient Roman ever put it in writing.

I say the best current understanding, because it took philologists quite some time to arrive at this conclusion. For centuries, they thought the second person plural future imperative passive did exist and they also thought they knew exactly what it looked like; it was formed from the present stem with the suffix -minor. For example, this comparative grammar of Latin, Italian, Spanish, Portuguese, French and English from 1827 happily lists laudaminor, moneminor, legiminor, puniminor. Amazingly enough, the form creeps up in grammar resources to this day, for example in this Italian Wiktionary entry.

This form goes back to some very old grammars; in particular it is found in the Instituta artium (wrongly ascribed to M. Valerius Probus, but in reality probably from the 4th century) and in Diomedes' Ars grammatica (also 4th century). The anciennity of these sources seemed to give credence to the form. In addition, a very small number of occurrences of this future imperative were found in a number of manuscripts, in particular in Plautus.

But in the nineteenth century, philologists realised that the form did not exist, in the sense that it was never used outside of grammars. The presumed occurrences where misinterpreted. The Danish philologist Johan Nicolai Madvig published volume 2 of his Opuscula academica, a collection of smaller writings of his, in 1842, containing a treatise with the title De locis aliquot grammaticae Latinae admonitiones et observationes, which sought to correct a number of mistaken rules which were widely taught by the grammars at the time. Section VI of the treatise, under the heading De formis imperativi passivi, refuted the -minor forms:

Finally, to get to the forms of the verbs themselves, I shall not present something found by myself, but confirm and expand upon something found by another. For it is now twelve years ago that my friend Krarup denied that the form that in all grammars is ascribed to the second person plural future imperative passive (amaminor, hortaminor, vereminor) has any authority. But since then nobody has either removed this form, or else provided any new examples from an old writer; because Krarup rejects on good grounds those two Plautine examples which Ruddimann and previous writers name.

The friend seems to have been an otherwise relatively obscure person named Nicolaus Bygom Krarup, who had published a treatise De natura et usu imperativi apud Latinos in 1825. (So why twelve years? Because Madvig's piece had apparently first been published in 1837.) Scanning through it, I cannot really find an argument of the sort; perhaps he is referring to footnote 11?

I do not know if others came to the same conclusion independently, but in any event, since around the mid of the nineteenth century, this form seems to have vanished from Latin grammars.

Not the answer you're looking for? Browse other questions tagged imperative deponent-verbs future-tense or ask your own question.