Did poets elide across consonants?

I have a definite recollection that Plautus, Ennius, or some other early poet had a tendency to elide across a word-final S, as in (made-up examples) domus et → dom'et and domus est → domu'st. If memory serves, this was discussed in a class on Catullus, because one of Catullus's contemporaries used this sort of elision to make an awkward line work, and was derided for it (ironically, that particular fragment only survived because it was quoted as a bad example).

However, I can't seem to find any reference to this now. Various articles talk about S not making position in Plautus, but I haven't been able to find anything about it not preventing elision.

Is this a real phenomenon, or is my memory faulty? And if it's real, what are some notable examples of it?

Terence and the Verb 'To Be' in Latin, by Giuseppe Pezzini (2015), describes -us est → -ust as (in at least some time periods) a special contraction belonging to est, rather than an example of regular sandhi rules: 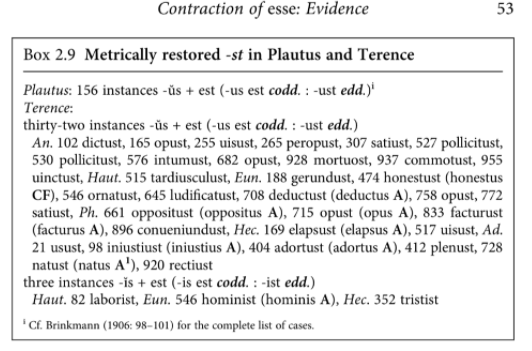 The phenomenon is also discussed in "Where Does Latin Sum Come from?", by Martti A. Nyman1. Nyman indicates that just as -ust can be found instead of -us est, there are examples in Plautus of -uss being used in place of -us ess (for Plautus, the second-person singular of esse ended in a geminate ss):

Nyman says that explaining these forms as resulting from loss of intervocalic s prior to contraction of adjacent vowels is "generally rejected" (page 45) and argues that instead, they can be grouped with the cases where word-final singleton s after a short vowel (especially short u) is lost before a consonant (pages 46-48). This is part of a larger argument that Nyman is making that in Plautus the basic second-person and third-person singular forms of the copula are consonant-inital ss and st, from which the vowel-initial forms ess and est are synchronically derived by a rule of prosthesis ((9), page 43).

Not the answer you're looking for? Browse other questions tagged example-request metre scansion elision or ask your own question.