Is there a dictionary that actually shows the verb patterns?

Is there a Latin dictionary that actually show the verb patterns? Patterns like

Otherwise I only see the examples and it is not possible to understand the alternative parameters that that verb can take, because all alternative forms are not visible, also cases are ambiguous generally.

As an example, Duden and some other German dictionaries has this, showing alternative forms formulated (example is for werden) https://www.duden.de/rechtschreibung/werden_planen_vermutlich

In English also, as an example if I search "talk", forms are shown like

So that I know in which ways I can use it. Latin dictionaries generally confuse me.

I do not know a Latin–English dictionary that gives simple, accessible, clearly structured usage notes for verbs and simple, stripped-down examples. If such a dictionary exists, I would expect it to be found in the educational market, catering to students of Latin in secondary school.

I know this is an English language website, and non-English dictionaries may not be very helpful for most readers. To those who speak German, however, I can recommend a Latin–German dictionary which I believe fits the requirements the OP seems to be asking for: Langenscheidt's Großes Schulwörterbuch Lateinisch-Deutsch, which is indeed targeted at secondary-school students. Here is what the entry for adiuvare looks like (screenshot from the online preview on the publisher's site): 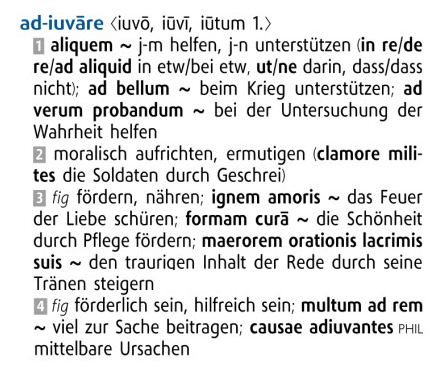 Note: (1) usage patterns are indicated by using ali- placeholders like aliquem (accusative object) or forms of res; (2) succinct examples that are easy to remember; (3) the typesetting makes the entry easy to read; (4) it gives only the most important usages. This dictionary actually has a long pedigree, it is based on Erich Pertsch's revisions to the Menge-Güthling, ultimately going back to Hermann Menge's first Latin–German dictionary from 1907. (Langenscheidt has published a confusing multitude of fashionably-named dictionaries based on this stock through the decades.)

For comparison, to show how far we've come, here is the same entry from my own copy of Langenscheidts Handwörterbuch Lateinisch-Deutsch (1983): 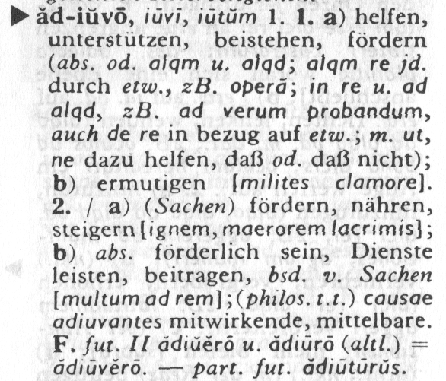 To be honest, one gets used to the telegram style with time, so it is actually pretty usable. But I have to admit the newer version is easier to read.

I would recommend taking a look at Fax nova linguae latinae as I find it to meet the demand of simplicity and verb usage. Personally, I would have liked to discover this source earlier on my studies.

On celo, for example, it readily presents the different ways of usage:

So we can see the double accusative pattern (aliquem aliquid), and the other two patterns; plus an example celare errata alicujus (all those with an English translation). It usually tries to display several senses of a lemma if they exist. It also shares idiomatic expressions from time to time in his examples.

Unfortunately, as far as I know, it is not transcribed, and accessible only by its scan.

Not the answer you're looking for? Browse other questions tagged classical-latin verbs dictionary or ask your own question.