When did genuine and spurious diphthongs merge?

In Ancient Greek, the diphthongs ει and ου were sometimes considered "genuine" (they descended from ε+ι or ο+υ or the like), and sometimes "spurious" (they descended from monophthongs ε and ο getting lengthened). Originally, the "genuine" and "spurious" diphthongs were pronounced differently, but at some point their pronunciations merged and they became indistinguishable.

I know this merging happened (in Attic) before the creation of the Euclidean alphabet—hence them being written identically. But can we narrow it down any more than that?

This merger is thought to have happened in the 5th-4th centuries BC. More specifically, it's a monophthongization, in which [ei ou] became [e: o:]. ("Genuine/spurious diphthongs" is a bit of a misnomer -- in Classical Greek, ΕΙ ΟΥ are not diphthongs but digraphs which stand for long vowels; some of these long vowels historically developed from diphthongs.) Here are some relevant sources.

Goldstein, "Diphthongs", in Encyclopedia of Ancient Greek Language and Linguistics: 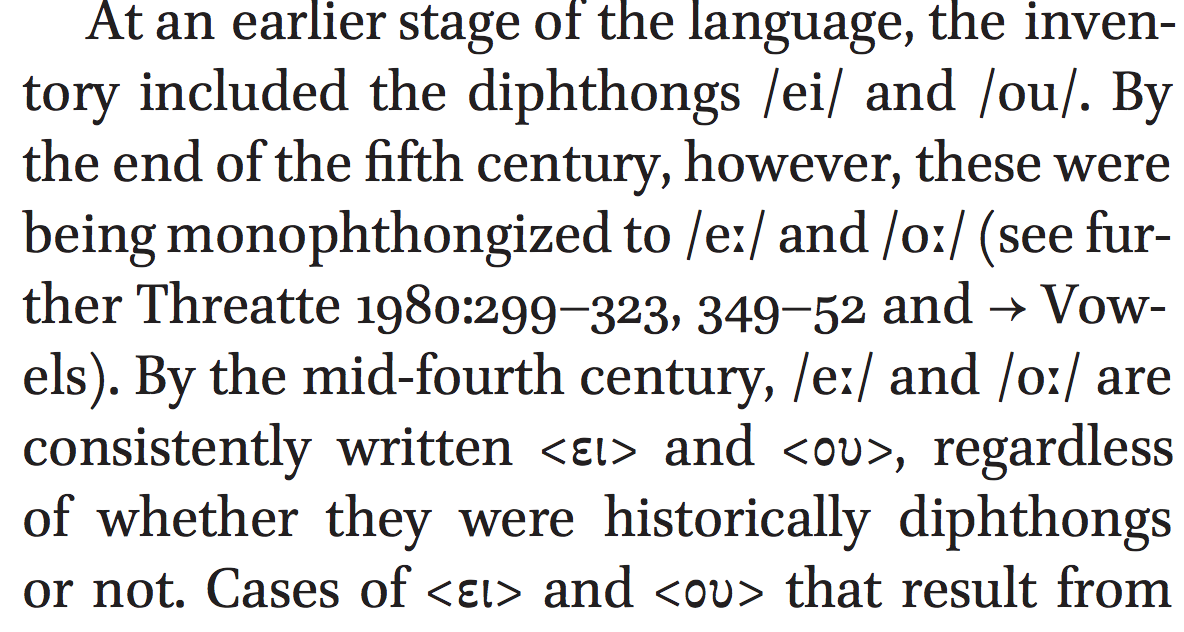 Allen, Vox Graeca (again on ΕΙ but with an almost identical discussion of ΟΥ later): 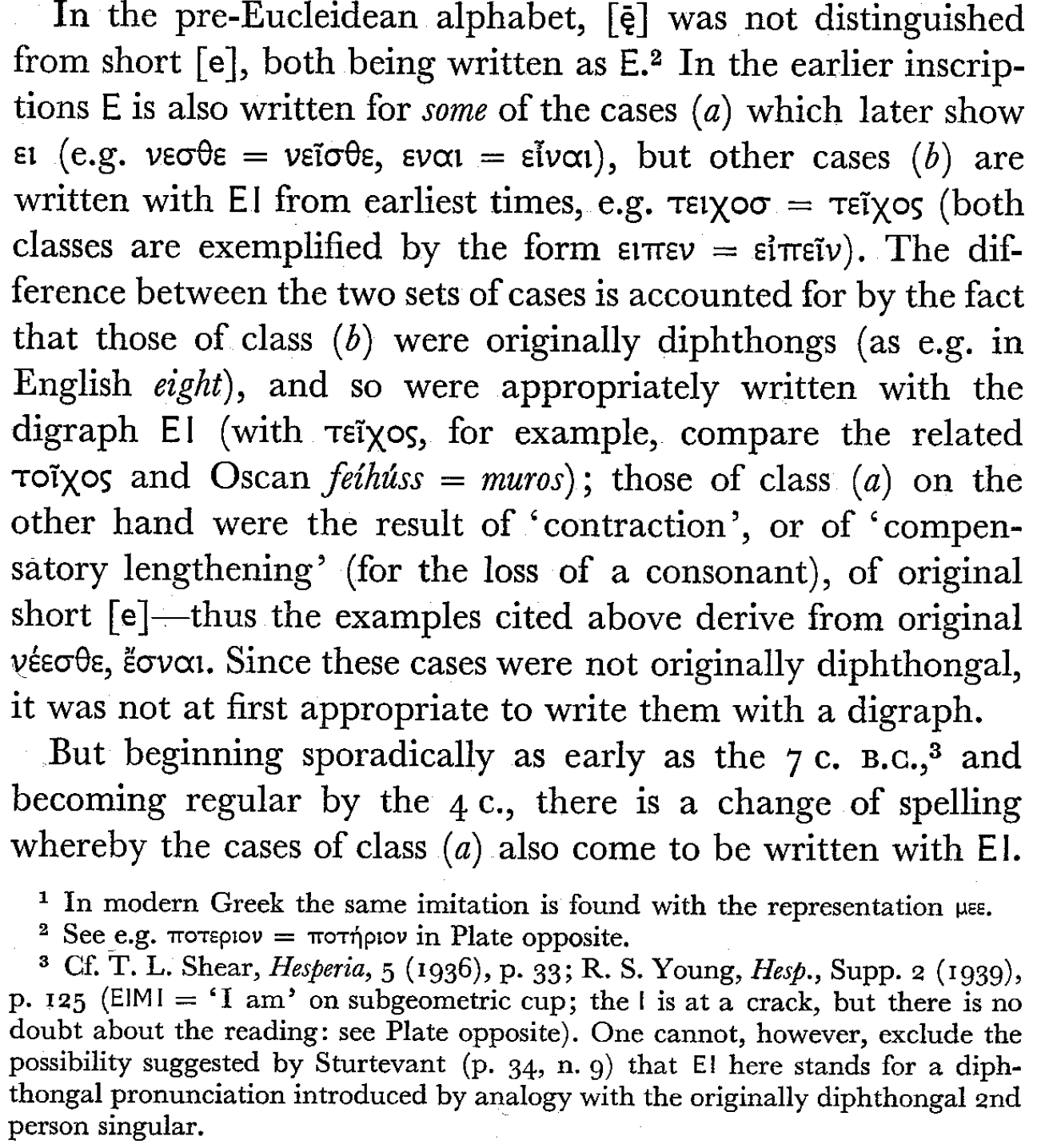 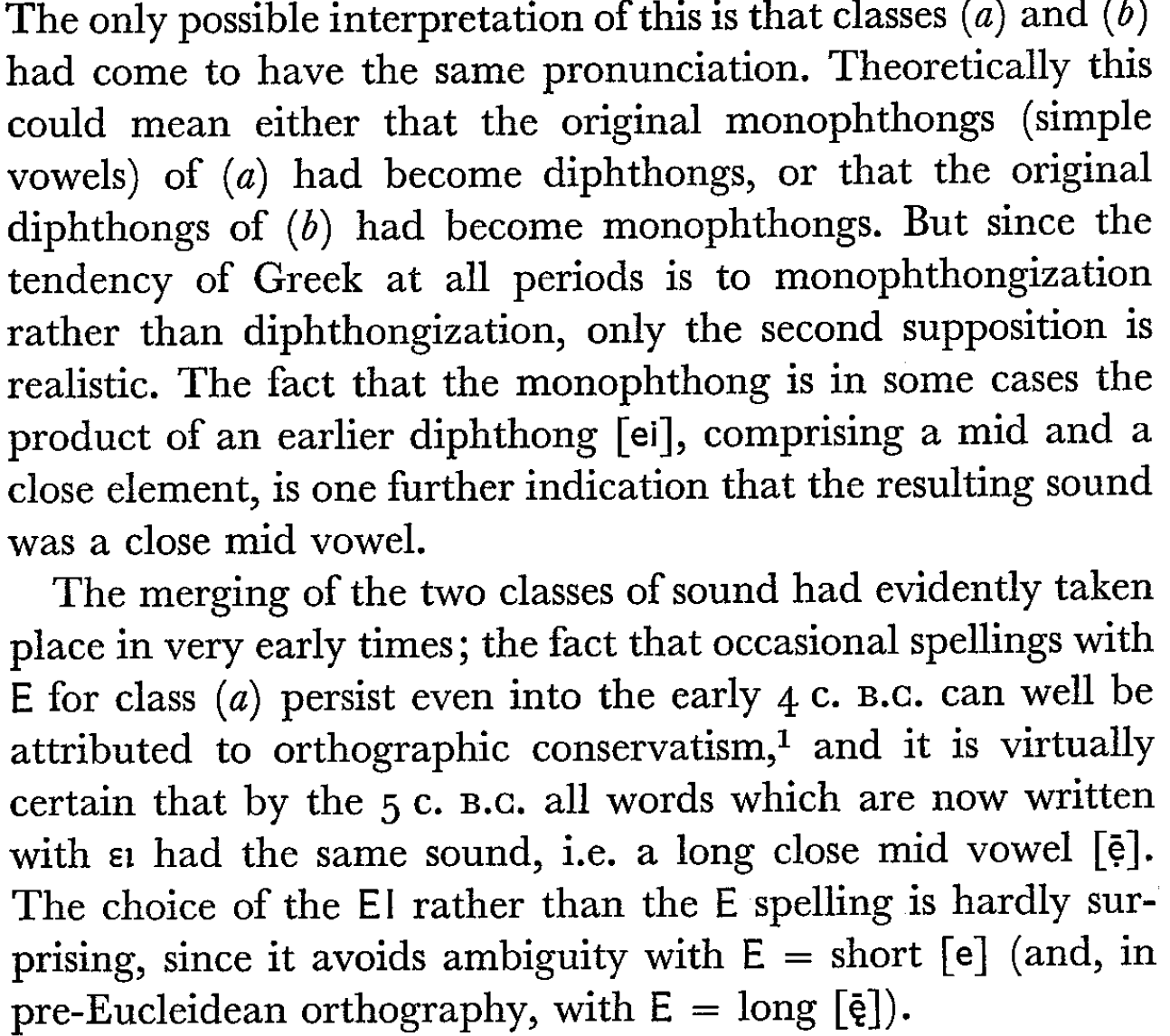 Similar datings are given in Buck, The Greek Dialects; Sturtevant, Pronunciation of Greek and Latin; and Sihler, New Comparative Grammar of Greek and Latin. (Sihler in one place suggests that the monophthongization of ΟΥ was earlier than that of ΕΙ, but he doesn't give evidence or details for this.)

Strangely, Horrocks, Greek: A History of the Language and Its Speakers (p. 161) dates the development much earlier:

Unless I'm misunderstanding his discussion, this seems impossible given the consistent spellings of these sounds as digraphs before the fifth century.

(A couple of relevant sources I can't currently access are Threatte, The Grammar of Attic Inscriptions, and Teodorsson, The Phonemic System of the Attic Dialect 400–340 B.C. If anyone has access to those and is interested in this question, they could be worth checking.)

Not the answer you're looking for? Browse other questions tagged greek pronunciation phonology diphthong or ask your own question.

16
When and how much did Romans speak Greek?
10
When did equus regain its first U?
8
Did any Ancient Greek words have intervocalic /h/?
5
When did σχ become [ʃ]?
8
When is “ei” a diphthong?
2
Do vowels before /j/ make diphthongs?
9
When did the difference between acute and grave disappear?
3
Vowel hiatus and non-diphthong vowel pairs (compared to Romance languages)
3
Ancient Greek: how to distinct true and false diphthongs?