I'm looking to find the translation of devom. I have looked for a translation online and in dictionaries and come up empty.

In Arthur Machen's The Great God Pan he quotes an inscription:

and translated it as

"To the great god Nodens [..], Flavius Senilis has erected this pillar on account of the marriage which he saw beneath the shade."

The inscription appears to have been based on an actual Lydney Park inscription which uses "Devo".

However, I can't find a translation for devom, or a cognate, except as devomo, which doesn't really make sense in context. Google Translate won't translate it either. I suppose it could be a form of deorum, but that still begs the question of why it isn't linked as an alternate form.

I found some other usages:

Short answer, dēvom is a pre-Classical and non-standard form; the standard Classical version would be dīvum.

In Old Latin, there were three different long front vowels: a low-mid /ɛː/, written ē, a high-mid /eː/, written ei, and a high /iː/, written ī (*). The second-declension genitive singular ending, for example, was -ī, while the nominative plural was -ei—this is important for the meter of Plautus, where filiī and deei are two syllables (by contraction), but filiei and deī are three.

In the standard variety of Classical Latin (as spoken in Rome), ei merged into ī, hence "of the man" and "the men" both became virī. But in other varieties, the vowels developed differently: ē and ei merged into /eː/, while ae (Classical /aj/) became /ɛː/. Varro and Cicero both describe this as a "rustic" or "provincial" feature, avoided by the educated urban elite. But it was certainly common, and it persisted all the way to Romance times.

Separately, the genitive plural ending for the second declension used to be -ōm (compare Greek -ων). This eventually changed to -om, then to -um (or -ōrum under the influence of the first declension). But the sequence vu is generally avoided in Latin, so the change of final o to u was slower after a v: we still see forms like servos and volt (for Classical servus and vult) until the early Empire.

As for what it's doing here? Frankly, I think it's an error—either on the part of the real-world author, or the fictional inscriber. I would expect instead dēvō, the dative singular: "to the god". But a literal translation of the inscription as written would be "to Nodens of the gods".

EDIT: As Ilmari Karonen notes in his answer, it could also be dēvō m[agnō]: "to the great god". This also fits the given translation better.

(*) Ei started as a diphthong, but turned into a monophthong somewhere around the third century BCE; compare Ancient Greek's monophthongs η ει ῑ. The Romans didn't actually write the macrons, of course, but they're helpful for discussing the phonology (since the distinction between short and long was an important one).

I'm hardly a Latin scholar but I'm going to hazard a guess, based on the given translation and the propensity on classical writers to abbreviate things, that the first line of the inscription should actually be parsed as "DEVO M NODENTi", where the "M" is an abbreviation for magnō, "(to) the great".

Addendum: Indeed, that's the reading given on page 9 of John Rateliff's "Art of Nodens" PDF*, which I happened across while searching for examples of such abbreviations, and which also features (on page 3) this even more abbreviated example: 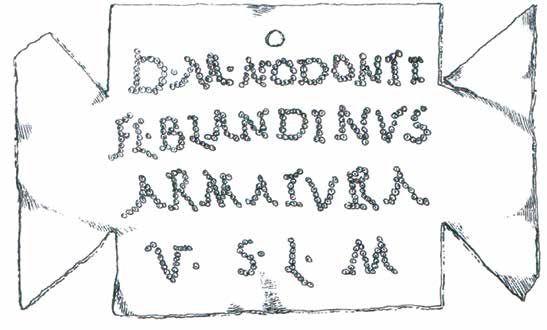 *) I assume the figures in this PDF are intended to accompany a scholarly commentary in a separate document, of which I alas have not yet been able to locate a copy.

Not the answer you're looking for? Browse other questions tagged vocabulary latin-to-english-translation inscription old-latin or ask your own question.