Does D/L variation go back to a dl cluster?

As outlined here in “Indo-European *d, *l and *dl” by Tim Pulju, there’s a hypothesis going back to Hamp 1972 that the l in Latin lacrima and d in the archaic variant dacruma both represent a dl cluster that derived in this word by long-distance dissimulation of r...r to l...r. (Compare longus for the development *dl > l.)

Pulju also explains lēvir/laevir as coming from a form with *dl: he says that in most other branches of IE, *dl was reduced here to *d, but Lithuanian láigonas "wife's brother" is supposed to show a sporadic reduction to *l instead (in contrast to Lithuanian dieverìs "husband's brother", also from the same root). (Section 4.1 *dāiwēr 'husband's brother', page 317)

However, the traditional explanation is that there was a sound change d > l (also in some other words like lingua), apparently not regular in Latin, but often attributed to influence from some other dialect.

What have other linguists said (preferably, more recently) about this topic?

Words that show l in place of d in Latin, taken from a list in "Deltacism of laterals in Sino-Tibetan and elsewhere", by James A. Matisoff:

The name Ulixēs, although it's unclear if the use of l goes back to a Greek dialectal variant.

Bibliography on this phenomenon: Poucet 1966: 140, supplemented by Burman 2018; if you have free time, you can also watch "(False) Etymology and ‘Sabine -l-‘" by Nicholas Zair - he presented it at the 14th Fachtagung of the Indogermanische Gesellschaft in Copenhagen in 2012 (Etymology and the European Lexicon; you can skip the Q&A session at the end, it's not particularly informative).

What do we have?

Indeed, a small number of Latin words have been identified (Bruno 1961 has 39) where one would expect d - based on their IE comparanda - but still encounters l. This is most irregular, based on what we know about Latin so far.

NB: A superficially similar change * -dl- > -ll is very different (it's Inlaut only and then we have a geminate l here, a very common sound change, assimilation). Sihler 1995 (section 223) writes:

e.g. Weiss 2020 mentions sella, grallae, and pelluuiae, Sihler 1995 also has sallo. Most importantly, we have IE comparanda to justify *dl in these cases.

How to interpret our data?

Hypothetically, one could try to lump all these words together into a Proto-Italic (or 'proto-Latin') phonetic change/law of sorts or one could deal with the words individually or in smaller groups (ad-hoc).

In my opinion, it's all about the plausibility ("the a priori probability") of one's proposal. One needs to examine IE comparanda and how much sense one's proposal makes from what we know from linguistic typology, phonetics, and historical linguistics in general and of the IE family, the Italic group, and Latin itself.

So, we could continue interpreting this small subset of Latin words as some kind of a dialectal/historical irregularity (a current standard view) or substantially revise our models of Latin, Italic, and IE (and PIE) phonetics (I am aware of three such proposals only, Schrijnen 1914 (cf. Pulju 1995), Lehmann 1986 and Prósper 2019; thanks to Asteroides for bringing to my attention the work of Tim Pulju and Blanca María Prósper).

Lehmann 1986 argued that the d/l variation is a result of PIE d < t' (he subscribed to the glottalic theory). Lehmann himself called this change "an aberrant development." You can read about the glottalic theory e.g. in Wikipedia, if you don't know what it is, and decide for yourself.

Pulju 1995 believes that "Irregular correspondences involving /d/ and /l/ provide evidence for the reconstruction of a rare PIE cluster *dl" [emphasis mine - Alex B.] that "was phonotactically disfavored and was therefore subject to sporadic modification throughout the IE language family." The *dl reconstruction in PIE is not new at all and goes back to Schrijnen 1914. I will leave it up to you to decide whether you find this argument convincing.

I think it's extremely important to carefully examine relevant data with d/l Anlaut variation (all the etymological data is taken from de Vaan, unless stated otherwise):

NB: *dl reconstructions are very unusual, cf. Schrijnen 1914 *dlai̯u̯er (Pulju 1995 *dlāiwēr) His evidence? It is entirely based on one Lithuanian word, laigonas. (I didn't look it up yet myself). Obviously he has to 'explain' how the "objectionable" and "rare" *dl cluster was lost in all the IE languages.

de Vaan writes s.v. odor: "Some forms show the change of intervocalic * d > l, the exact conditions of which are unclear. In this word, it seems that d was preserved in front of ō, but changed to l in front of ē. In view of fulgēre / fulgere, fervēre / fervere, it seems likely that olĕre is older than olēre (cf. Leumann)."

Italic comparanda: not listed - how robust is this Proto-Italic reconstruction that is based on one Latin word only? (that being said, take a look at its PIE comparanda below, esp. Skt., OAv. vs. OCS, Greek vs. Hittite)

two Latin words with solid IE cognates and an unclear development in Latin/Italic, lingua and lacruma

lacruma (dacruma - three attestations only, all by the grammarians only - Mar. Vict., Keil 6.26.2) (Anlaut l/d variation)

Beekes: "A Hell. form *δάκρῠμα is often assumed to be the source of Lat. dacrŭma, lacrĭma, but see now the discussion in De Vaan 2008 s.v. dacruma ."

BUT Weiss 2020: 504 is against the attribution of this etymological irregularity in Latin to Sabine (he calls it a misnomer, see footnote 63 re "the Sabine l theory" or Poucet 1966 calls the Sabine l theory unacceptable ('inacceptable'), a linguistic myth.

Comments: How reasonable would it be to posit a *dl reconstruction for Latin lingua taking into account its IE comparanda?

The most promising approach imho is best summarized by Burman 2018:

"Even if the theory of Sabine l is no longer considered credible, modern scholarship still struggles to find a definite explanation of a handful of examples of Latin /l/ where /d/ is expected. A possible reason for our inability to find a unified answer for d/l variation in Latin is that there may not be one. Lingua has been given a plausible individual explanation through analogy to lingere. The solutions to the problem of lacrima, oleo, levir, solium and malus may be easier to find if we approach the words individually instead of as examples of the same change" (p. 58).

According to him, Etruscan influences could explain the irregular change of initial /d/ > /l/ in Latin: see also littera vs Greek diphthera, laurus vs Greek daphnē.

(*) [d] instead of /d/ because Etruscan had no voicing distinctions.

(Source: Arnaud Fournet, A Tentative Etymological Glossary of Etruscan, in The Macro-Comparative Journal 3.2)

For ease of reference, here's de Vaan's entry for lacruma. 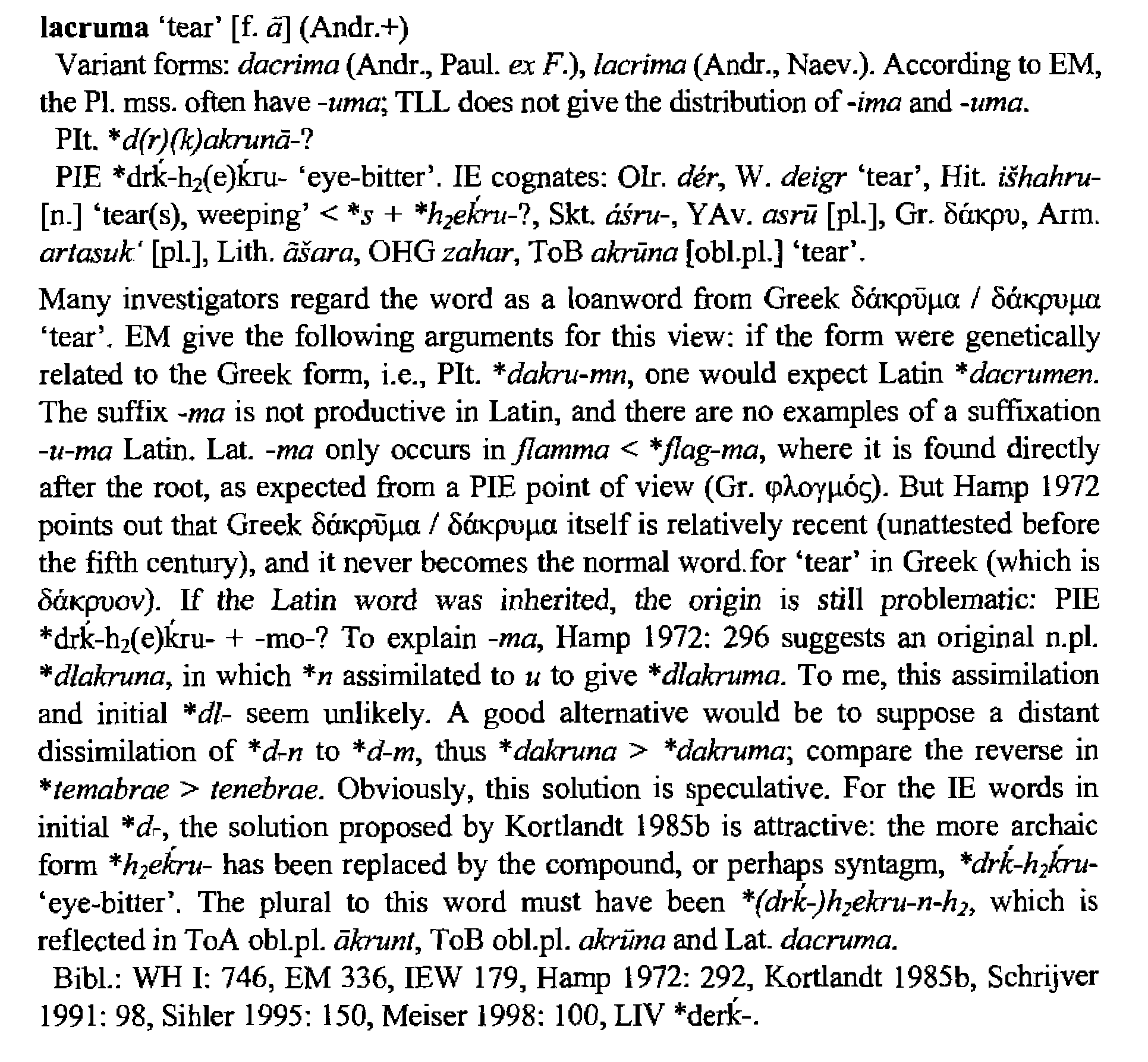 Other sources I've found since posting the question:

Has a long discussion of why not to attribute d/l variation to a "Sabine" sound change.

Prósper argues that Latin had a regular sound change of *#daC, *#dāC > #laC, #lāC; examples of word-medial d/l variation in forms like solium are attributed to a separate, sporadic change that was conditioned by a following front vocoid (p. 468).

I found a two-page abstract "(False) etymology and 'Sabine -l-'", by Nicholas Zair, that seems to have some of the same conclusions as Prósper's paper (that the idea of a "Sabine" origin is mistaken; that examples of d/l variation can be divided into two main contexts, word-initially before [a] and word-internally before a front vowel).

The author's web page mentions a podcast to which d_e has given me the link: https://video.ku.dk/etymology-and-the-european-lexicon-part-30-false

The big problem with the apparent cases of *d > l in Latin is working out which of them are reliable. In the late 19th century there was a vogue for trying to identify cases, most of which are now untrustworthy because of improvements in our understanding of Indo-European and Latin etymology, sound change, and morphology. This was triggered by Conway (1893), who was the first to discuss the question in detail, and also to identify the origin as borrowing from Sabine (on extremely weak grounds, as noted by Poucet). There are dozens of supposed cases in Petr (1899).

Many other examples are only known from ancient grammatical and lexicographical works, and these are not necessarily to be trusted in this context. I have tried to explain why this is in Zair (2019), where I talk about some of the instances involving apparent *d > l.

I go back and forth on which examples are plausible, but I would say that the following cannot easily be explained away: word-initial: *dacrima > lacrima ‘tear’, *daywēr > laeuir ‘son-in-law’ word-medial: *odeō > oleo ‘I smell’, *sod-yo- > solium ‘throne’

As I noted in 2012, and Prosper also does, the word-initial examples are both followed by *a; there are also some other examples which she adduces and which I am (now) more sceptical of. But you can’t propose a straightforward change *da- to la-, because of daps ‘feast’, damnum ‘damage’. I don’t find Prosper’s approach to solving this problem entirely plausible.

Not the answer you're looking for? Browse other questions tagged etymology consonants old-latin or ask your own question.

8
Does 'noel' really have its origin in Latin?
16
Why does uacuus have three syllables?
8
Why does “inferus” have /f/ rather than /d/?
4
Does any Latin noun originally end in -r?
5
Where does "lascīvus" come from?
4
Were "meridiem" and "mediam diem" in free variation in Latin?
6
Variation between syllabic and non-syllabic V: in what contexts is it possible?