Would anyone be able to tell me what "aut asphodelos aut nullus" means. I've tried automatic translators without success. This is a tag from a 1942 novel by Michel Innes (who went in a lot for that sort of thing).

Asphodelus -i (m) appears to be a kind of lily that the Greeks closely associated with death. Specifically, in Greek and English literary use, it references the Elysian meadows (the good place where fallen Heroes go).

I'm not an expert on this subject-- this is where I got the information: https://www.etymonline.com/word/asphodel. It appears to be corroborated by a quick internet search.

This form of asphodel may be the accusative plural in Latin. It might also be the nominative singular in Greek, but I don't know enough Greek to make a definitive guess.

I would translate this phrase as "Either Paradise or Nothing"

Seemingly nothing much had been done in the matter of Daffodil. And the Chief Constable, who had hard-worked officers to protect, was pretty stiff with Caroline. Not at first: I gather he tried heading her off by explaining some of the jobs he had on hand, and letting her in on a harmless wartime secret or two. But Caroline, who is even more specifically pertinacious than generally curious, held to her theme. It was aut asphodelos aut nullus with her. I believe her motive was quite selfish and practical: Daffodil was the only horse in Harrogate in which she really had confidence, and she was consequently determined that Daffodil should be traced.

The phrase is a reference to Aut Caesar aut nihil, literally "Either Caesar or nothing", liberally "I will settle for nothing less than being the Emperor." In the movie The Great Dictator, which came out in 1940, Charlie Chaplin rendered it Aut Caesar aut nullus (literally "Either Caesar or no one"—not quite the right idea, I think) in this famous scene. There's even a bust of Caesar in the corner of the room.

There's a third error here: it should be aut asphodelus aut nullus (or better yet, aut asphodelus aut nihil). Asphodelos is in the accusative case and plural; Caesar and nullus are in the nominative. Perhaps Innes was trying to transliterate the Greek straight into Latin.

Anyway, the intended meaning is: "Either Daffodil or nothing!", facetiously likening Caroline's stubborn pursuit of the horse to the overweening political ambition of Julius Caesar and Hitler. 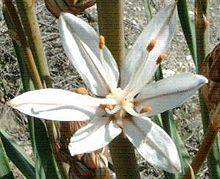 Asphodelus albus; or, with sufficient poetic license, a horse.

Not the answer you're looking for? Browse other questions tagged latin-to-english-translation or ask your own question.

6
What does the clause "quae suae salvationis causa exstitit" mean?
9
Is my interpretation of "Ad Astra per Aspera" correct?
3
What does 'fac et gaudium' mean?
1
Can someone help me translate the following passage in Latin into English?
6
How do you translate 'nega frequenter'? Is it 'deny frequently' or 'rarely deny'?
10
Are there official Latin translators?
8
Identifying a type of dog transliterated from Latin to Hebrew
4
Sentence translation " ... videat, annon implacabilem Deum quoque sit experturus"
5
Philosophical meaning of "ens causa sui"?
4
What is this character saying in Latin?