How do you make sense of this entry in the lexicon LSJ (Liddell, Scott, Jones)?

I think this is a good question for this forum, since the LSJ is commonly used by this community and probably follows the conventions typical of other dictionaries. I'm hoping someone can help me make better sense of lexicon entries, not just in the LSJ but in all lexicons.

Below is a screenshot of an LSJ entry taken from the Perseus (Tufts) website, and here is the link. 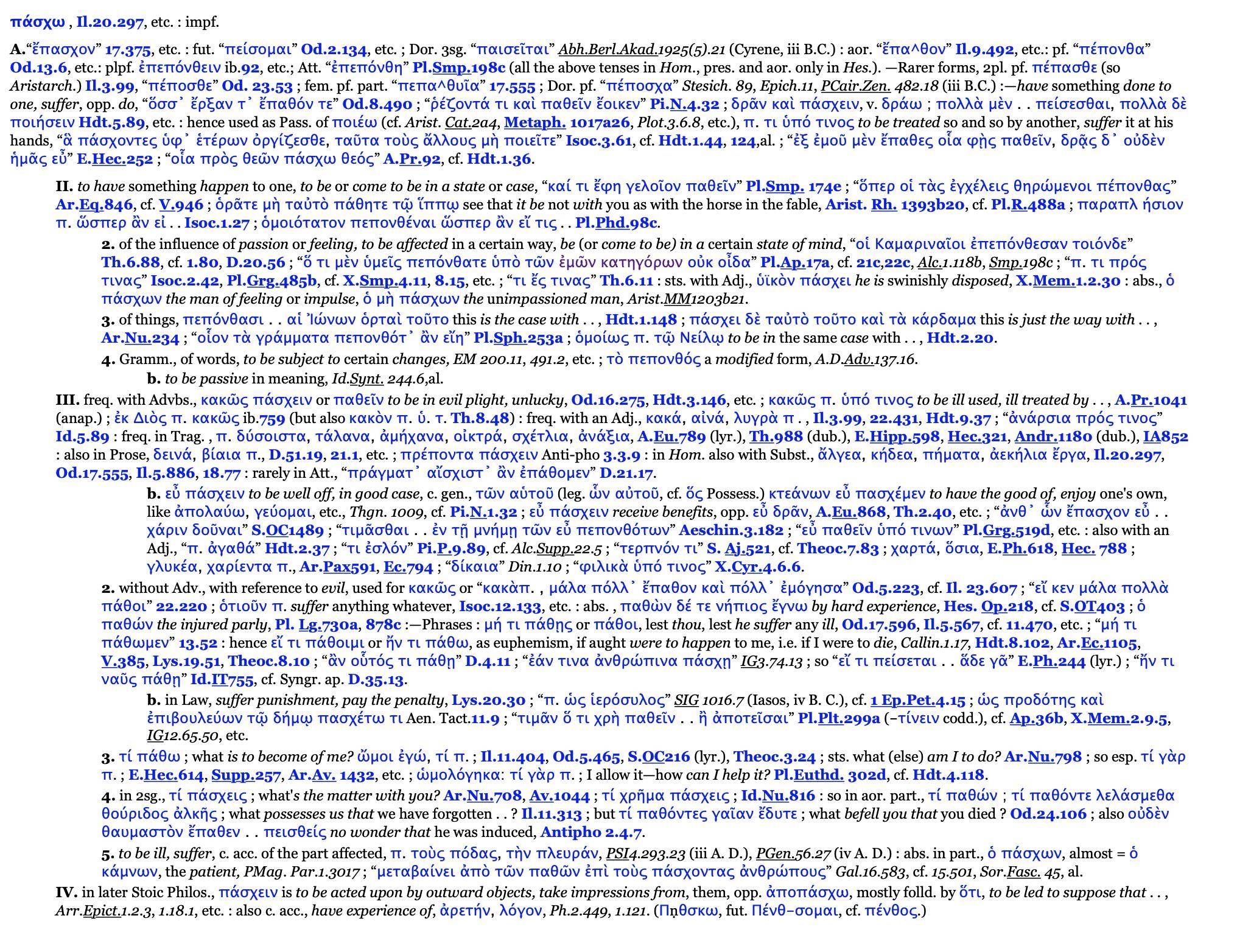 How do you interpret this lexicon entry?

Next to the letter A it seems like there are attestations of various uses of the word. But I'm not sure why they do this. Then II, III, and IV seem to give different senses or usages of the word, but there is no preceding Roman numeral one. This happens at all levels, so I assume I, 1 and a are always implied, please correct me if I am wrong.

I'm looking for a simple and clear explanation of this format. I'm hoping that it will help me make sense not just of the LSJ, but of other lexicons, too.

First and foremost, the bold "A" is a mistake. The Perseus Project digitized the lexicon mostly into a plain-text form, which is then re-processed to turn citations like "Il.20.297" (Iliad book 20 line 297) into links, add in nice-looking headers for readability, and so on.

This processing isn't always perfect: look at "ἔπα^θον" at the end of the first complete line, which is meant to be ἔπᾰθον (with a breve on the alpha). And in this case, it also inserted a header somewhere it didn't belong. That first line is supposed to start with impf. ἔπασχον 17.735, etc. : fut. πείσομαι Od.2.134, etc.—in other words, listing out different forms a student might need to conjugate it properly in different tenses, with pointers to where those forms are attested.

After the tense information, it launches into the first translation, which is where there should potentially be a paragraph break. This starts at the end of the third full line, with "have something done to one, suffer". The parts in italics in each translation are the ones corresponding to the word, so the formatting here is meant to show that the "something" isn't actually part of πάσχω itself (it would be represented by a separate word or phrase in the Greek).

Definitions are then organized hierarchically, which is where the Roman numerals, Arabic numerals, and lowercase letters come into play. As you correctly surmised, all the numberings start with 2; the intent is that you can cite the meaning directly under II as "definition II.1", without ever needing to print two heading numbers in a row. There should be a I before the first definition, but it's missing here, which I think is a processing issue.

Within each definition, there are some attestations with that particular sense. The actual word being defined is abbreviated to its first letter to save space, so when you see κακῶς π. ὑπό τινος, that π. is some form of πάσχω. (The particular form generally doesn't matter without more context.)

Yes, this is confusing. Many (older?) dictionaries use the following system:

However, those dictionaries tend to leave out the first instance of any level! So any A, any I, and any 1 will not be written, which is highly confusing for us. So the first definition begins out of the blue (after invisible A. I. 1.). And the Arabic 1 after II is also omitted: you'll just see II. rather than II. 1..

To make this more readable, the website has tried to add A. at the beginning of the text, but it should really be after the section on morphology (at the first :—, before have something done to one, suffer). And we should write A. I. 1. at that position rather than just A.. Similarly, where the dictionary has II., we should prefer II. 1..

And the use of attestations mixed inside definitions and without line breaks makes it even harder. All this was done to save space, because the volume was large and heavy enough as it was. The website has tried to make it more readable by adding paragraph breaks and indentation. Here is the entry in the physical LSJ (it begins near the end of a column, so it is in two scans here):

Not the answer you're looking for? Browse other questions tagged dictionary or ask your own question.

4
Resources that classify words/definitions by period in Latin history?
5
Niti and straining for a stool
4
How do I access the Oxford Latin Dictionary online?
5
How do you choose the correct meaning of a word from a dictionary?