News sources have reported that China sent boxes of face masks and other medical supplies to Italy, stamped with this quotation and attributed to Seneca. For example, https://www.theguardian.com/commentisfree/2020/mar/18/remaining-calm-in-adversity-what-stoicism-can-teach-us-during-the-coronavirus-pandemic

What is the original Latin for this and which text is it found in?

Actually, despite being "internet wisdom", this quote doesn't seem to appear in any of Seneca's works.

It is likely just inspired by his literary production*, and much resembles a quote by Bahá'u'lláh, a Persian religious leader of the 19th century:

Ye are all fruits of one tree, the leaves of one branch, the flowers of one garden.

This article (in Italian) debunks several quotes of these days, including the one attributed to Seneca. It is stated that Stoicism expert Massimo Pigliucci confirms the doubts over the authorship, and that

in Italy it is labelled as "message of fraternity" in two headstones in the military structure of Santa Rosa in Rome (headquarters of the Italian Navy) and in the Parco Sigurtà di Valeggio sul Mincio, in the province of Verona. For the latter, the website of the garden points out that the words are "inspired by the philosopher Seneca", and this might be the origin of the misunderstanding.

Here is the Santa Rosa one: 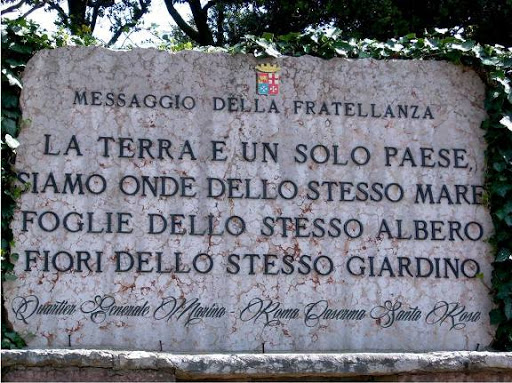 *For example, in Epistulae Morales, 95, 51-53 Seneca wrote the following (translation mine):

Everything you see, which includes both divine and human things, is one: we are the parts of one great body.
Nature created us as relatives for it begot us from the same root and to the same end.
It instilled in us mutual love and made us social. [...] May the famous verse [by Terence] be in your heart and on your lips:
“I am human, I regard nothing that is human foreign to me”.
Let us possess things in common: we were born to live in community; our society is just like a stone arch which, doomed to collapse if the stones did not sustain each other, is upheld in this very way.

Not the answer you're looking for? Browse other questions tagged passage-identification seneca-iunior or ask your own question.

6
Finding the original Latin text of Seneca (“No tree becomes rooted and sturdy unless many a wind assails it.”)
6
Identifying a classical Latin quotation to the effect of “My affairs are a mess, but I manage others'”