How to correctly say Star Wars in Latin?

I know that the nouns are stella and bellum, but I think the translation should in spirit be closer to stellar wars or something similar.

Joonas' answer is right on grammar, but since we're not talking about a single star, an adjective based on sidus would have better semantics. I'd go with Bella Siderea.

Familiarity with modern Romance languages is not an unmixed blessing when translating into Latin. Often Latin has multiple words in the same semantic field with different shades of meaning, only one of which survived into the Romance languages.

Because number markings on adjectives just show concordance with the noun, there is no way to get around the number implications of stellaria vs siderea. Bella Stellaria means star wars in the sense of wars about a particular star; only Bella Siderea means wars fought among the stars (in the sense of out in space, in remote places). Note that modern astronomical lexis in English retains this distinction at least to some extent--stellar wind is produced by a particular star (i.e., each produces its own), but sidereal time is time as measured by referencing the stars collectively.

Indeed, you cannot use a plain noun as an attribute in Latin the way you can in English. Instead of "Star Wars" you have to say "Wars of Stars" or "Stellar Wars". Adjectives are a very natural choice in Latin (whereas I would be tempted to choose genitives in Romance languages).

Bellum is indeed good for "war". It is a matter of taste whether you choose plural; not all official translations of the franchise do so. The adjective from stella is stellaris and corresponds well to the English "stellar".

My translation suggestions are:

The singular sounds better to me, but either is valid and readily understandable, at least now at the time of the premiere of Episode IX.

Both stella and sidus are good starting points for "star". I would advice against interpreting words too narrowly in contexts like this — the original English title is not all that descriptive literally either, as stars actually play almost no role in the stories. The way I see it, "star" is just a more poetic way of saying "space". Both stella and sidus work well in this respect. Efficient communication is a part of good use of language and stella resembles many star-words in other languages more closely, so it helps make the name more recognizable.

As brianpck comments below, Stella Bellaria has the benefit of sounding nice due to the repeated element -ella-.

Some might argue that the adjective stellaris is not a classically attested word. While that is true to my knowledge, there are two good reasons why it does not matter much: (1) not all Latin needs to be classical and (2) the word stella and many derivatives in -aris are attested, so stellaris is valid classical Latin to me although the word itself does not appear.

The world has already chosen the translation (whether it's right or not). Wikipedia calls it "Bella Stellaria". Some fans agree: 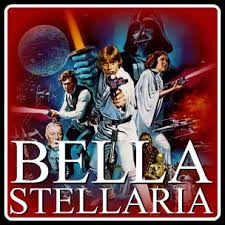 @Joonas Ilmavirta treats "star" like an adjective. To me, "star" should be treated as a noun, in which case the translation becomes

(Disclaimer: I was raised to French & German translations of "Star Wars", where it is indeed translated as "war of the stars" -- bellum stellarum).

EDIT: based on the accepted answer, other candidates for a 'noun' translation include

And in keeping with synonyms...

I strongly disagree with C Monsour's interpretation of how the -ārius suffix works semantically. Stēllārius can perfectly mean 'of the stars', it is not tied to a singular interpretation ('of a star'). Sīdereus does have the advantage of being a classical word, used by many ancient authors even, much unlike stēllārius which isn't even medieval but modern, but this argūmentum ad antīquitātem is different from the grammatical-semantic argument.

Compare librāria taberna 'bookshop' (attested in Cicero, Philippicae II.21), in which many librī 'books, scrolls' are found, not just one. Or herba pūlicāria 'flea plant', from which fleas were believed to be born from (att. in Caelius Aurelianus, Acūtae Passiōnēs II).

Furthermore, the Favre edition (in the 1880s) of the Du Cange Medieval Latin dictionary mentions a noun stēllāria meaning 'a sea ship, or road in the sea or sky that guides sailors', something that naturally requires more than one star (in fact, there were and are more than a hundred commonly-used navigation stars, it's not just Polaris a.k.a. the North Star).

(Interestingly, stēllārius is also listed in the Favrean Du Cange as an adjective meaning marīnus 'of the sea', in association to ships guided by the stars at sea, and also purpureus 'purple', due to purple colorants being highly valued goods traded by sea.)

In conclusion, bella stēllāria is fine as long as you don't mind modern coinages. Since Latin users today prefer not to use novel words when possible (making only reasonable and convenient exceptions like computātrum 'computer'), I agree bella sīderea is better, but only on the grounds of ancient usage, not on the grounds of meaning.

Stēllāris is another non-classical, non-ancient word with some usage in medieval and modern Latin. The Lewis & Short dictionary lists one attestation in Macrobius (early 5th century), the OLD doesn't bother. Use that coinage if you want, but what I said about sīdereus being better due to its classical origin stands.

As an Italian let me exercise my direct descendant rights by saying that "Bellum stellarium" sounds really ugly, "Bellum sidereum" has a much better feeling to it. And why not take the extra step and -thinking at the title of a movie- go for De bellis sidereis after Caesar's well know prequel.

Not the answer you're looking for? Browse other questions tagged english-to-latin-translation contemporary-latin or ask your own question.

3
How to write "gate of worlds" in Latin?

6
Need a Latin backronym for military unit - defensive, national, secret
4
How do you say "You can't automatize a mess"?
9
How to translate "the Force" from Star Wars?
7
Translating "star" (actor, musician, or similar)
12
How would you say "cafe" in Latin?
3
How to write "gate of worlds" in Latin?
10
Is translating texts from Latin really necessary to learn the language?
6
UPDATE: How to translate "Comfort the afflicted; afflict the comfortable?"
7
How would you say "don't let up" in latin?