Why vowel lengthening in Greek compounds?

In Greek compounds, when the second member of the compounds begins with a short vowel, this vowel is often lengthened:

What is the explanation for this lengthening? And is there a rule for when it happens, or is it sporadic?

This is neatly explained in Buck's "Comparative grammar": 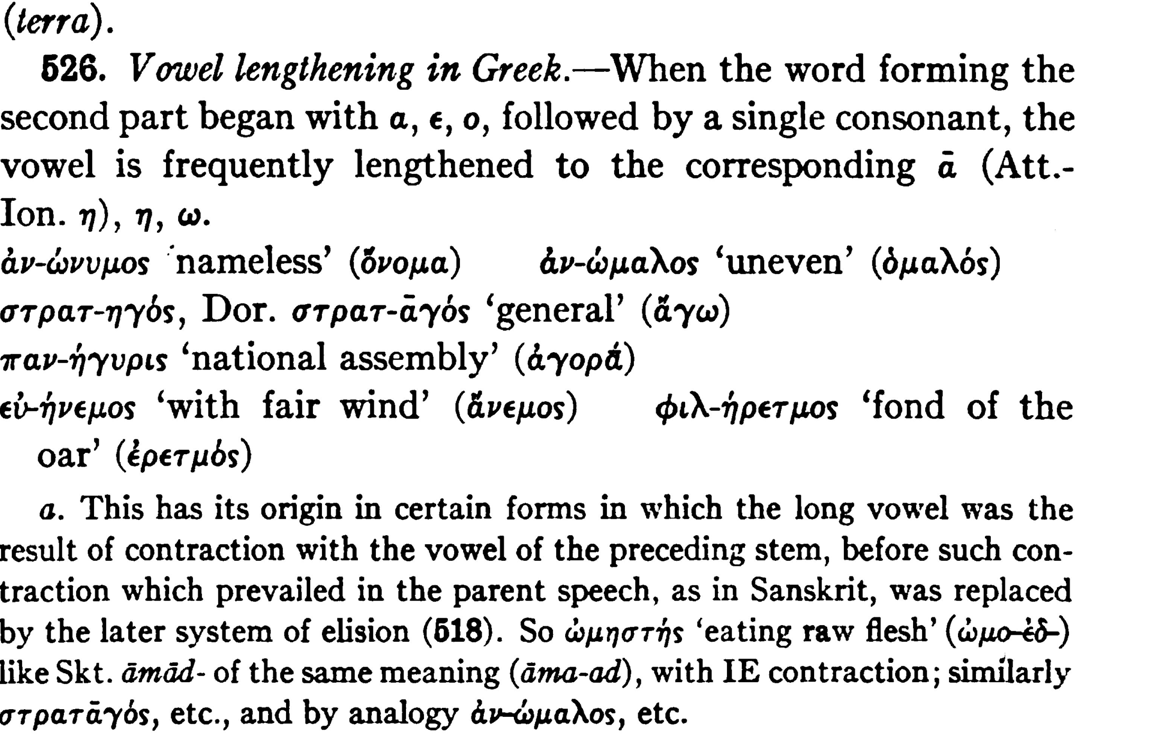 And not all that differently in Sihler's "New comparative grammar":

It looks like more than one process could lead to a long vowel in a compound word where the corresponding independent word has a short vowel. Here is an overview of what I have found so far.

As Proto-Indo-European is generally reconstructed as having a phonotactic restriction against vowel-initial words, Greek vowel-initial words usually result from the loss of a word-initial consonant and/or the addition of a prothetic vowel. Some common consonants responsible for this are the laryngeals (plain *h₁, a-coloring *h₂, o-coloring *h₃), *w (aka u̯ or digamma), *s (which became *h), sometimes others like syllabic nasals.

The second element of a compound in Greek can take a different ablaut grade than the independent word, although the details of this are still unclear to me.

Types of compounds that may show long vowels

As loss of digamma and /h/ occurred later than loss of other consonants, it seems that compounds with a vowel-initial second element that originally started in digamma or /h/ can show either uncontracted forms, or contracted forms that follow the typical Attic rules for contraction of vowels in hiatus. Smyth 878 says τιμωρός (from τιμή and ϝοράω) is an example where this process results in a long vowel; in the form κακοῦργος, which Smyth says corresponds to Epic κακο-εργός, contraction of ο-ε results in ου.

Smyth says the combining form corresponding to the verb ἔχω is -οχος, an example of the second element of a compound being in a different ablaut grade from the independent word. As ἔχω/-οχος comes from a PIE root starting with the consonant *s, Smyth says κληροῦχος and πολιοῦχος represent contraction of ο-ο (< *oho < *oso).

With words where the second element originally started with a laryngeal, the history of the vowels in the compound forms seems to be more complicated. Different sources give slightly different explanations that I don't understand enough to summarize right now. The most general explanation is lengthening either from contraction of adjacent vowels or in compensation for elision of a preceding vowel, but other mechanisms proposed to be relevant in at least some cases seem to be ablaut and certain laryngeal-specific sound changes such as the change from *n̥h₃ > νω mentioned in the Sihler quote in fdb's answer.

Some quotes from articles I have found:

Not the answer you're looking for? Browse other questions tagged greek word-formation compound or ask your own question.

7
What is the etymology of “chorāgus”?

4
Why is the Greek definite article τη duplicated in this sentence?
5
What is the diminutive of κῆτος?
1
Are there iota or hypsilon contract verbs?
4
Where did the Greek sibilant letters come from?
4
In ancient Attic Greek, how (un)stable were “ΝΣ”/“ΝΖ” and preceding vowels?
4
What is the evidence for a long vowel in χριστός “anointed” and Latin Christus?
7
What is the etymology of “chorāgus”?
5
Counting to ten in Homeric Greek