Did "sanctifico" ever mean "to make the sign of the cross"?

My question is about how "santiguar" gained such meaning. Did it gain it already when the word was incorporated into Spanish, or does such meaning also comes from Latin? From what I can see, sanctifico does not mean "to make the sign of the cross". Actually, I've struggled to find how that is said at all in Latin! The sing itself is called signum crucis, but I can't find a verb that reflects the action of making such sign.

Any idea on this? I think looking for medieval religious texts might be key here. I did an early search and signum crucis is of course ubiquitous, but as a "noun" and not as a verb.

In the general instructions of the Breviarium Romanum I found the verbs ‘munire’ (= defend, protect) and ‘signare’ in the phrases ‘De ratione signo crucis se muniendi’ and ‘Omnes signant se signo crucis’.

The reference for the first two phrases is signum crucis (see picture below): Breviarium Romanum. 1961. Paris, Desclée. It is the official book for Roman catholic priests reciting the daily office. It consists of two volumes, the first of which starts with general instructions (rubricae generales breviarii). There is one page on the sign of the cross. I include an image of this page. The grammar appears to be all right. 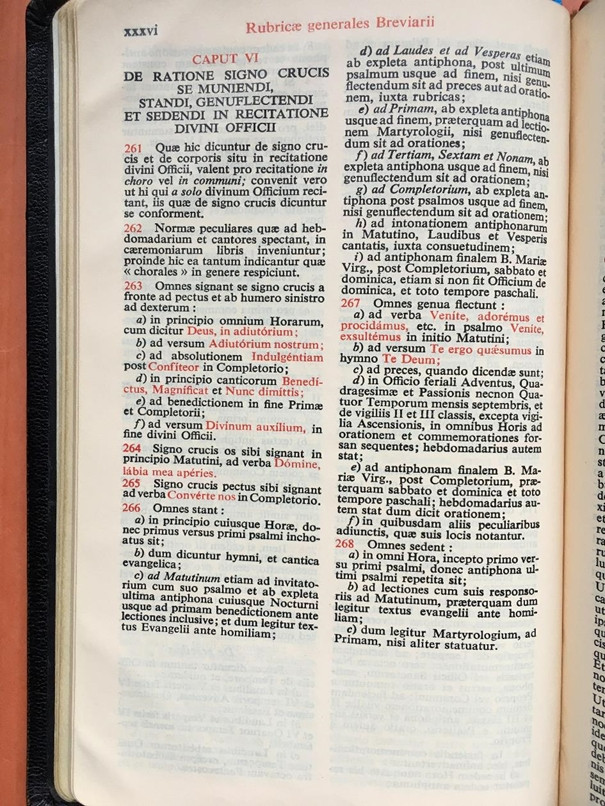 Not the answer you're looking for? Browse other questions tagged etymology meaning medieval-latin spanish or ask your own question.

13
How did mundus come to mean both world and clean?
8
When and how did "bonus" get to mean "extra"?
24
What did "actuālis" actually mean in Latin?
7
Origin of "lunatĭcus"
3
What did σκάλα exactly mean in Byzantine Greek?
11
Did "benedicere" ever mean "to blaspheme"?
3
Did the Romans ever use 'decimatio' in a generalized sense?
7
What did "quid pro quo" originally mean?