Information on the Penates

I'm writing a passage analysis on Vergil's Aeneid, III.103++, which includes the scene where Aeneas is visited by the Penates (household gods), which the Trojans have brought with them from Troy. As part of the paper I wanted to say something about the Penates, and was looking for any good references, ideally in Latin from the Roman period (or as long as the tradition survived - a side question, 'how long did the worship of the Penates/Vesta endure?'). As an example of the kind of thing I'd be interested in, Ovid Fasti VI.249-252 references the closely connected worship of Vesta. Any good references (e.g. besides original Latin ones) would be welcome though.

There is a whole book in Latin on the topic:

Although I never read this specific work, hopefully it contains plenty of information about the topic of interest!

Interesting; it refers to a Mas Femina pair in bronze, and a Twin brother Gemini pair. I was expecting a horsemen pair like the chessmen and Demetrios Georgios: did I dream it?

Most likely you didn't dream! It may be that some Lares or Penates had a shape similar to those you mentioned. Especially for what regards the privati Penates, the household gods, which usually represented ancestors and forefathers.

Instead the "twins", Castor and Pollux, were the Penates Publici, and it is also interesting that a great statesman and leader as Pompeus ignored the potential of their image for his "propaganda":

[source: Ushering in a New Republic: Theologies of Arrival at Rome in the First Century BCE, by Trevor S. Luke (https://books.google.it/books?id=w0k8BAAAQBAJ&printsec=frontcover&hl=it#v=onepage&q&f=false)] 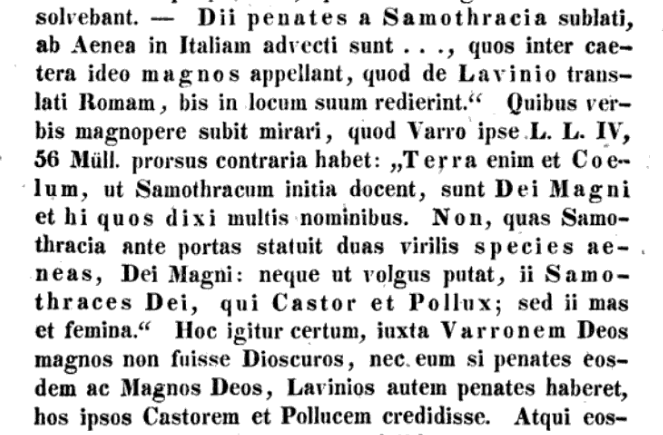 It is instead more difficult to say who was the lady, maybe the same Vesta, who was often venerated together with the Penates.

Brief ref to Jacob, Laban and the theraphim. cf. Apuleius "wherever I go I always carry... (journey)... the figure of some god."

But you may be disappointed by Rees lack of references. (This page published on the net by Archive who are currently asking for donations.)

Another source: When Lullingstone Villa became Christian (350?) the cellar was shut up; there was a small private shrine to the ?deity of the water source enclosed.

Not the answer you're looking for? Browse other questions tagged reference-request or ask your own question.

18
On the etymology of â€śdiscipulusâ€ť and â€śdisciplinaâ€ť
6
What is the largest known piece of Etruscan literature?
8
Are there literary attestations of werewolves in the Classical period?
4
How do I access the Oxford Latin Dictionary online?
2
What are some of the major words that we use in English directly (unmodified) from Latin?
7
Olympic oath : The crown or death (?)
2
Determining the etymology of words in Latin
1
On the etymology of Lacedaemon