Origin of the Latin Language?

Latin is an Italic language which originated in the Italian peninsula, and was originally spoken in Latium and Ancient Rome located along the Mediterranean Sea. Similar to most European languages, Latin is a descendant of the ancient Proto-Indo-European language

I also read it has been heavily influenced by the Etruscan language.

But do we have records of the Proto-Latin, or is it only suppositions based on the philological study of common Indo-European and the Latin words?

But all of this, so far, is purely theoretical. Linguists have a pretty good understanding of what Proto-Italic looked like, but it's all reconstructed by comparing the daughter languages against each other—there's no actual written record of Proto-Italic. (Some linguists in fact only use the "Proto-" prefix for reconstructions: if we actually found some inscriptions in this language, it would be called "Common Italic" instead. But this convention isn't universal.)

Then, starting around the seventh century BCE, the situation changes. The Italic-speaking peoples have picked up writing from the Etruscans and/or Greek colonists in Magna Graecia, and inscriptions start to show up! So from this point, we have a pretty clear picture of what the different languages in the vicinity of Rome looked like: Italic had split into two branches, the Sabellic or Eastern Italic languages (like Oscan and Umbrian) and the Latino-Faliscan or Western Italic languages (Latin and Faliscan). And underlying all of them was a substrate of Etruscan, a completely unrelated language that had been spoken there before the Italic-speakers had moved in.

The Latin of the earliest inscriptions is generally called Old Latin, and is the oldest stage of the language that we have direct evidence for. Anything earlier, like Proto-Italic, has been reconstructed by comparing Latin and Faliscan and Oscan and Umbrian and so on to find the core similarities between them. And Old Latin, as a blanket term, covers everything from the Praenestine Fibula (seventh century BCE) to the mid-first century BCE. The oldest parts look quite a bit different from Classical Latin, but they're much more similar to Classical than Classical is to, say, modern Italian.

P.S. You mention Etruscan influence on Latin—there was definitely some influence, but it's not as huge as one might expect. The biggest effects I can think of are initial stress/medial vowel reduction and a bunch of loaned vocabulary, but not much else. Though it's hard to say for sure, given how little we know about Etruscan in general.

The question might be better suited for Linguistics.SE. However, the general information on the history of Latin is outlined in the Wikipedia article of the same name:

"It is believed that the earliest surviving inscription is a seventh-century B.C. pin known as the Praenestine fibula, which reads Manios med fhefhaked Numasioi "Manius made me for Numerius"."

The writing above runs from right to left. …

"Vulgar Latin […] This spoken Latin differed from the literary language of Classical Latin in its grammar and vocabulary. […] Because there are few phonetic transcriptions of the daily speech of these Latin speakers (to match, for example, the post-classical Appendix Probi) Vulgar Latin must be studied mainly by indirect methods.
Knowledge of Vulgar Latin comes from a variety of sources. First, the comparative method reconstructs items of the mother language from the attested Romance languages. Also, prescriptive grammar texts from the Late Latin period condemn some usages as errors, providing insight into how Latin was actually spoken. […]"

So, not only do we not have any records of Proto-Italic, the language that evolved into Latin and other Italic languages. In fact, there are no records of the actual Latin pre-dating the 7th century BC and thus all this knowledge is indeed based on the scientific reconstruction.

Edit:
A comment on "Praenestine fibula" can be found in The Latin Language by Leonard Robert Palmer: 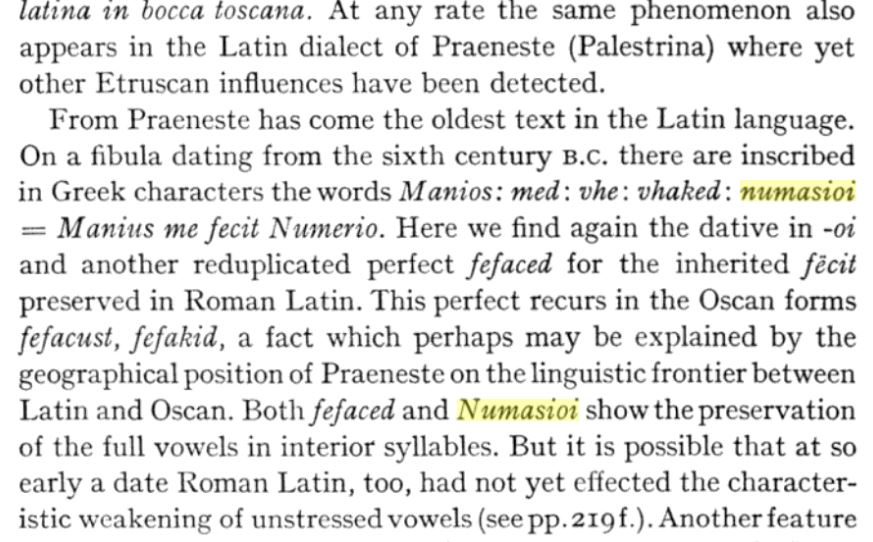 Not the answer you're looking for? Browse other questions tagged history proto-indo-european etruscan or ask your own question.

22
When did the word "ly" enter the Latin language and where did it come from?
47
Why is the language of ancient Rome called "Latin" instead of "Roman"?
10
Does any historical Latin-based sign language exist?
8
Why does “inferus” have /f/ rather than /d/?
6
What is the largest known piece of Etruscan literature?
7
Do any Latin authors preserve Etruscan quotations?
7
What did the Etruscans call their letters?
7
How would you say "The Etruscan language died two thousand years ago and nobody understands it." in Etruscan?
1
What's the cool killer app of Latin?