Julius Caesar's last words; according to William Shakespeare's play of the same name.

There seems to be a difference of opinion regarding the exact translation and thus, too, perhaps, the true meaning of the phrase.

What is the exact, literal translation of the aforementioned phrase? What are other, possible meanings?

Feel free to also include your own interpretation, if you wish to do so.

Well, without too much knowledge of any deeper, ulterior meanings to the phrase, I can certainly provide and analyze the literal translation for you:

Even you, Brutus?
You too, Brutus?

Suetonius, in his work Vita Divi Iuli, reports the last words of Caesar being Greek καὶ σὺ τέκνον; which is the original source of Shakespeare's line, translated into Latin fairly literally:

An alternative Latin translation, familiar to readers of Astérix, is the similar Tu quoque, fili: here τέκνον is translated by the equivalent filius, but the conjunction et "and, too" becomes quoque "as well, too, even."

In any case, the meaning is simple: Caesar was chastising Brutus for being among the conspirators, that he expected better from him. "Even you, son?" or "You, too, Brutus?" are standard renderings in English. Because of the simplicity of the phrase, it is rather straightforward to interpret and difficult to ascribe variant readings.

It has already been pointed out that Suetonius reported the words "καὶ σύ, τέκνον" as Caesar's last, and that these are the ultimate origin of Shakespeare's "Et tu, Brute?" (though it seems to be Richard Edes who first coined the Latin phrase, in his 1582 Latin-language play Caesar Interfectes, seventeen years before Shakespeare's Julius Caesar).
The literal meaning is clear, but for the sake of completeness I want to mention the other interpretation, which has become somewhat popular in recent years, especially since Kathryn Tempest drew attention to it in her 2017 book Brutus: The Noble Conspirator.

Apparently the archaeologist James Russell pointed out, in a 1980 article that I haven't been able to track down, that the words "ΚΑΙ ϹΥ" (that is, "καὶ σύ" in caps with a lunate sigma) frequently appear on curse tablets, mosaics, and other forms of art, often in an apotropaic capacity. Here, for instance, is a prominent 2nd-century example from the House of the Evil Eye in Antioch-on-the-Orontes, which shows the Evil Eye being attacked by animals and weapons with the words: 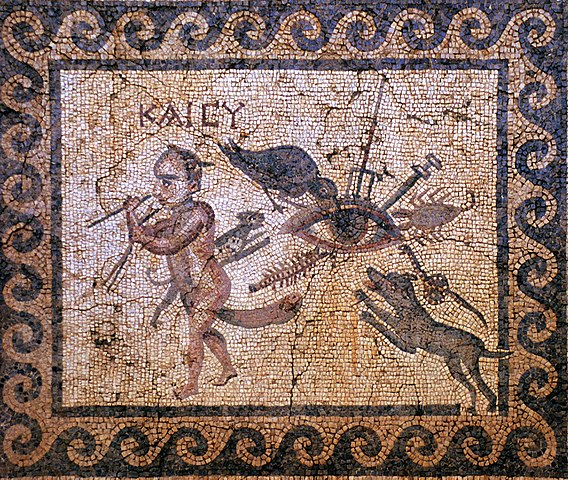 In this light, Caesar's last words possibly weren't a pathetic disbelieving "even you, son?", but rather a defiant (in Tempest's words) "See you in hell, punk".

The advantage of this view is that the preëxistence of "καὶ σύ" as a formula also provides an explanation for why Caesar would switch to Greek for no apparent reason—educated Romans of the era knew Greek, obviously, but they still spoke Latin in their day-to-day lives.
I don't know if this hypothesis has quite reached mainstream level yet, but I see no obvious problems with it, and it's not surprising it would largely have been missed so far.

Not the answer you're looking for? Browse other questions tagged idiom latin-to-english-translation gaius-iulius-caesar or ask your own question.

6
Am I grasping this gerund correctly? and also the talem...qualem pair?
4
Translation of a passage