Why do numbered months in the ancient Roman calendar have different suffixes?

Wikipedia and other sites detail the (possibly legendary) ancient Roman "Calendar of Romulus": 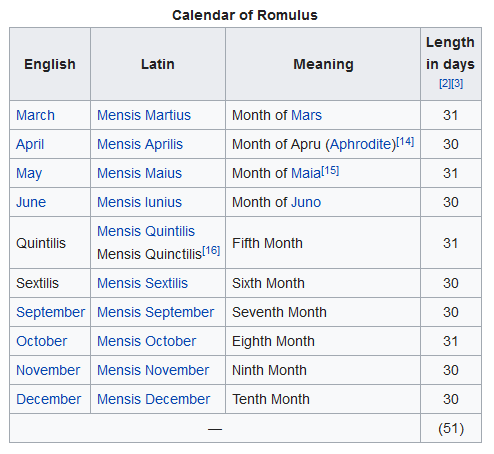 I'm curious about the suffixes to the "numbered" months, the fifth through tenth. The names of the fifth and sixth months (the ones that were later renamed to honor Roman emperors) end in "-ilis". But the the seventh through tenth months (the ones that we still use today) instead end in "-ber". Is there a known linguistic reason for such a difference?

This question is related but different from this one, which asks why months one through four were named after gods. The current question is only interested in different suffixes in the numerical fifth through tenth months.

This is going to be an unsatisfying answer, but I'll post what I've found anyway.

The usual best source for Latin etymologies is De Vaan. Unfortunately, he only covers developments from Proto-Indo-European to the start of Latin; since september was derived within Latin itself, he mentions it only in passing.

Tucker's (significantly less modern) etymological dictionary does go into a bit more detail, though. He brings up two different hypotheses.

The first is that it was originally something like *septem-mens-ris, with the latter morphemes being from mens-is "month" and the adjective-forming -iris/-ilis. Assimilation and epenthesis turned this into *septem-membris, and haplogy turned that into *septembris, which evolved into september.

According to this hypothesis, the same happened to *novem-mens-ris > november, and *decem-mens-ris > december. October was then formed by analogy with these.

The other hypothesis is that there was no *-mens- at all, and that there was either an element *-mr-, or just the ending -iris. The b would then be epenthetic, both in september and october.

Neither of these, unfortunately, explains why we don't see the straightforward quint-ilis, sext-ilis, *septim-ilis, *octav-ilis, *nōn-ilis, *decim-ilis. But it's worth noting that we see the English "quartile", "quintile", "sextile" (from French from Vulgar Latin) from the ordinals, and then "septile", "octile" from the cardinals. It's possible that Latin only used -ilis on numbers less than seven, for whatever reason, which is why the extra morpheme was added to september and up.

Not the answer you're looking for? Browse other questions tagged derivation suffixes calendarium or ask your own question.