What is the relationship between “cut off” and “X-coordinate”?

Etymonline claims that abscissa originally meant 'cut off', but what's 'cut off' about an x-coordinate? X-coordinates are merely numbers, not lines. How did a word for 'cut off' come to be used for x-coordinates?

1798 in Latin form, earlier Englished as abscisse (1690s),
from Latin abscissa, short for abscissa (linea) "(a line) cut off," or (recta ex diametro) abscissa "(a line) cut off (from the diameter)," fem. of abscissus "cut off," past participle of abscindere "to cut off, divide, part, separate," from ab "off, away from" (see ab-) + scindere "to cut, rend, tear asunder, split; split up, part, divide, separate," from PIE *skind-, from root *skei- "to cut, split." The Latin word translates Greek apolambanomene. 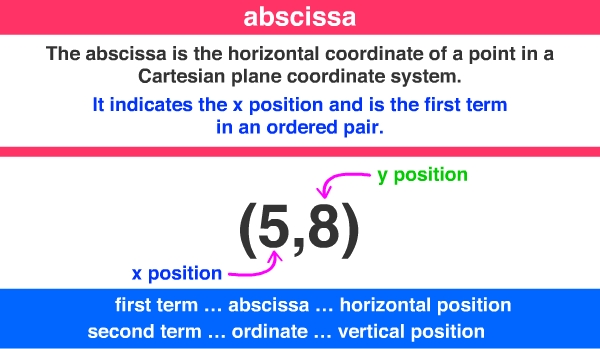 While Etymonline isn't particularly reliable (and has a strong aversion to citing any sources), this line almost has it right:

It's a calqued Greek word, though not the one Etymonline claims.

As far as I can determine, Apollonius of Perga is the one who first introduced the term, in his enormous treatise on conic sections. He uses the word ἀποτεμνομένη ("amount-being-cut-off") for what we might now call an "X-coordinate".

For example, here's Proposition 20 from Book 1:

Or, in a more legible typeface:

If, in a parabola, two straight lines are dropped perpendicular, from the cut [i.e. the curve of the parabola] to the diameter, then squares built on them [on these straight lines] will be to each other, just as the parts sliced off from the diameter by this cutting, from them [the lines] to the vertex.

Or, to modernize it a little bit:

(The "diameter" of a parabola is a bit of an archaic term: it's the line parallel to the directrix passing through the vertex. For the parabola y=ax², the "diameter" is the X-axis.)

In other words, he's figured out the equation of a parabola: nowadays, we'd put this more simply as "y=ax², for a constant a". What we might now call a "Y-coordinate", he calls the length of a perpendicular dropped from a point to the diameter. And what we might now call an "X-coordinate", he calls an ἀποτεμνομένη, an "amount-being-cut-off"—because to him, the X-coordinate is how much of the diameter we've marked off by dropping that perpendicular.

Or, to put it another way: Apollonius is marking a point on the parabola, then dropping a perpendicular from that point to the X-axis. This effectively slices the X-axis apart; the sliced-off bit that lies between the origin (in this case the vertex) and our perpendicular is the ἀποτεμνομένη. Earlier, he uses the word τομή "cut" for the curve of the parabola itself: you might imagine all these lines and marks being engraved into a piece of material, so that every line we draw is indeed a "cut".

When Apollonius's works were translated into Latin, ἀποτέμνω was calqued to abscindō, "to cut off". But Latin doesn't have a present passive participle like Greek does. So some translators used a finite verb form, like this one (from Apollonii Pergæi Conicorum libri octo, et Sereni Antissensis De sectione cylindri & coni libri duo, Oxford, 1710):

Giving us the now-familiar abscissa: the "amount that has been cut off". This one could be used as a noun, unlike the finite verb version, so it's the one that stuck.

Not the answer you're looking for? Browse other questions tagged etymologia mathematics or ask your own question.

1
In Classical Latin, did the prefix 'de-' in 'deputare' mean anything semantically?
1
What semantic notions underlie ex/in-tēnsiō with the logical meanings of ex/in-tension?
8
Is there a connection between modus and (adverbial) modo?
2
What is the connection between figs and pride in the word Caprificus?
1
How do the statistics definitions of 'accuracy' and 'precision' relate to their etymons?
8
Is the U long or short in the forms ussi and ustus of the verb ūro?
0
What semantic notions underlie 'fold' with 'plight; predicament'?
3
On the origin of the name “culture” ( possible confusion between “cultura” and “cultus”)
8
Is there a relationship between the word amor (love) & mors (death)?