On the etymology of Greek ἄελλα, and the mysterious Hesychius gloss for αυεουλλαι

I see on Wiktionary that ἄελλα is related to ἄημι, which comes from the PIE root *h₂weh₁-, meaning "to blow". This explains ἄε, but not the rest.

Prompted by the weird Alcaeus word αυεουλλαι glossed by Hesychius as ἄελλαι παρὰ ἄκλω (Ἀλκαίῳ?), I looked further, and found the root *welH-, meaning "to turn, to wind" (as in "winding road").

ἄελλα is supposed to mean "whirlwind", which is something that blows (*h₂weh₁-) and turns (*welH-), so it sounds sensible that PIE could have stuck the two above roots together into *h₂weh₁-welH-, "blowy-turn" = "whirlwind".

Evolving it into Greek, that would seem to produce *αϝεϝελλ-, which as a first-declension noun would give *ἀϝέϝελλα. If such a word existed, corruption of its plural into αυεουλλαι doesn't seem too implausible.

Imagine then that one ϝε had just dropped off, for whatever reason, and the stress had shifted back. That would explain ἄελλα.

Question 1: Is the above etymology plausible? Otherwise, where do the two lambdas come from?

While on the subject, here is what happens to the Hesychius gloss:

Question 2: Can someone help me figure out what logic Edmonds is following in his suggestion? Every υϝ has a different etymology!

Question 3: How is "vulgo"'s correction against the order of the letters and LP's not, when the difference is literally shifting the stress back? What corruption pathway can one imagine to get from ἄϝελλα to αυεουλλα?

In case anyone sees this who has seen this Quora question of mine, yes, this is sorta-kinda a repost, but etymology questions and Sappho/Alcaeus questions there tend to not fare too well, and since it's been six days since I asked, I decided it was time to ask here.

(Partial answer on question 1 only.) Here's Beekes on ἄελλα: 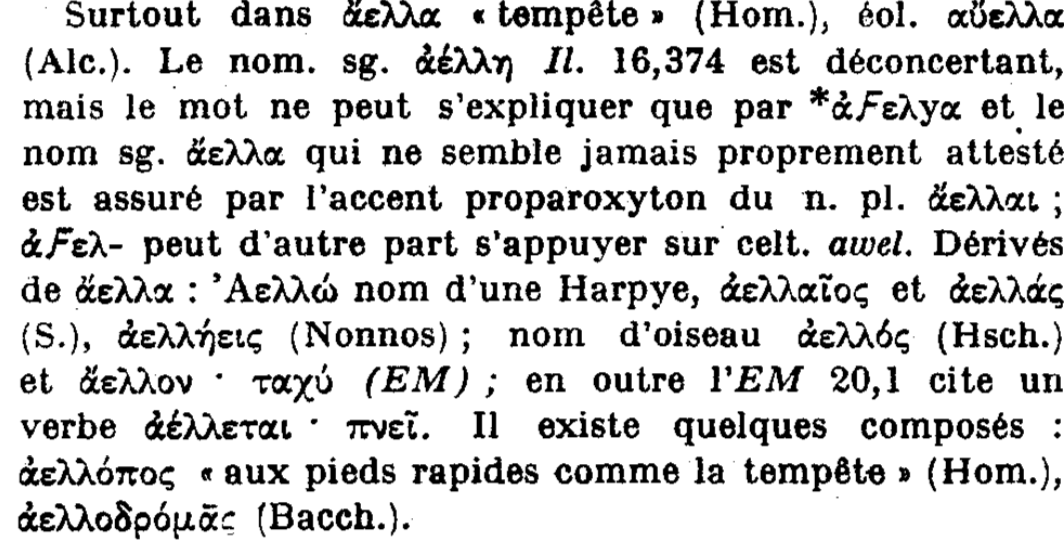 So the connection ἄελλα - ἄημι isn't straightforward, since it requires a somewhat arbitrary derivational morpheme *-el-. But there's at least one pretty close parallel for this: θύελλα "hurricane" from θύω "rage, seethe, storm".

The main problem with your suggestion of *h₂weh₁-welH- is simply that PIE didn't compound verbal roots in this way, as far as I know. But note that *h₂weh₁-welH- should give ἀϝηϝελ-, not ἀϝεϝελλ-; maybe you could get the double lambda from *h₂weh₁-welH-ya, but I'm not sure what the regular reflex of a sequence like *-elHya should be in Greek.

Not the answer you're looking for? Browse other questions tagged greek etymology aeolic or ask your own question.

11
Relationship between early Latin and Greek?
3
How did 'in-' + 'putare' compound to mean 'to attribute, credit to, impute'?
11
How do the verbs do and δίδωμι come from *deh₃-?
12
Etymology and pronunciation of words ending in “-iasis”
9
Does the verb "amare" come from the babble word for "mother"?
9
What is the etymology and origin of the name of Dido's sister Anna?
3
The tradition for Sappho Lobel-Page 144
3
How does drawing circles with a compass explain the etymology of 'universe'?
5
Crocodile vs. cocodrile: where does the "r" belong?