Latin expression for "carrying something on one's back"

In Spanish, the word cuesta is nowadays used as slope. Nonetheless, the etymology of the word indicates that it comes fom Latin costa, ae meaning "a side" but also "a rib". In fact, an old meaning for the Spanish word cuesta is "costilla" (Spanish for "rib").

This said, there's this Spanish expression, llevar algo a cuestas ("to carry something on one's back"). I have looked for the origin of the expression but it goes as back as the 12th century. It appears on the first preserved manuscript of Cantar de Myo Çid, so it probably originated before. Given the etymology of cuesta as "rib", the sense of the expression would be that of "carrying something over one's ribs". And given that the expression is very old, I wonder:

Did the Latin language have a similar expression, using the word costa, to convey the meaning of "carrying something on one's back", either on the classical or medieval periods?

An Early, Classical, and Late Latin synthetic expression corresponding to Sp. "llevar a cuestas" is the denominal verb bāiulāre (see the image below). As for analytic variants formed by a verb of motion plus a body part (the ones you appear to be more interested in), I've been unable to find any relevant verb with costa 'rib' but, for example, there are quite a few with dorsum 'back': e.g., cf. dorso graviora arma portare (Curt. V, 13, 8), pleraque utensilia reportare dorso (Col. 7, 1, 3), si dorso libeat cornipedis vehi (Sen. Phaed. 809), cum (asellus) gravius dorso subiit onus (Hor. Sat I, 9, 21), etc. Cf. also similar constructions with humerus 'shoulder': e.g., humeris rem publicam sustinere (Cic. Flac. 94).

Since there are many examples of an analytic construction like aliquid (onus) {dorso/humeris/collo/...} {portare/vehere/subire/...}, it seems reasonable that such a general constructional pattern could also be applied to the specific analytic correlate in Latin of your Sp. "llevar algo a cuestas", lit. 'to carry something over one's ribs'. There is in fact indirect evidence for the analytic pattern you're searching for with your costa 'rib': i.e., 'X moves Y over X's ribs'. For example, notice that the existing Spanish denominal verb acostar(se) can also be argued to be analyzed as being originally formed from a similar analytic structure like AD COSTAM MOVERE, with the nominal root cost(a) 'rib' being incorporated into an abstract verb of motion (i.e., the original meaning of Sp. "acostar(se)" is 'X moves X(se) or Y AD (i.e, toward) {X/Y}'s ribs'). NB: a similar analytic origin has already been posited for other so-called "parasynthetic verbs" like adgregare (cf. ad gregem ducere), *ad-ripare (cf. ad ripam venire), etc. 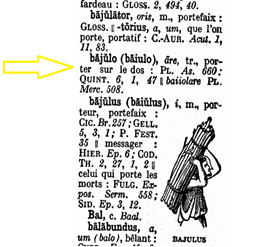 11
Can the use of articles be traced back to Late/Vulgar Latin?
7
How to burn one's bridges in Latin?
10
Blowing one's own horn
3
Is there a Latin expression one could use for "love nest"?
2
What is the Latin expression for "day one"?
6
What was the most common and generic word used in classic Latin that meant "to speak" or "to talk"?
4
Which Latin verb was closer to the current meaning of English "solve"?
8
Did the Vulgar Latin verb "toccare" exist?
3
Can "ave, vire" be used colloquially as "hey, bro"?