While interested in the etymology of 'recalcitrant', most sources, namely OED, M-W, etymonline) give something like the following:

For the next step, my Latin etymological dictionary (named interestingly enough 'Etymological Dictionary of Latin' by T.G. Tucker, Ares Publishers.) doesn't have 'calcitrare' but has in the entry for 'calx (gen. calcis)', mentions

Is there an additional meaningful morpheme in there, '-it-' or '-itr-', or is just a natural phonetic way in Latin for extending a noun to a verb? If a morpheme, does it have something to do with 'iter', 'itare', (for going or to go) or something similar?

That means the -tr- may be from the nominal suffix -trum, denoting (according to the Oxford Latin Dictionary) an instrument or similar, cf. aratrum, feretrum, monstrum, related to Greek -tron. Alternatively, it may be from the adjectival suffix -ter, neuter -t(e)rum; in fact, those suffixes may all be one and the same morpheme. It is also possible that the -t- in those suffixes is the same as that of the supine suffix -t- as used in past participles, but that is my own speculation.

The -i- between stem and suffix is then a 'filler' vowel, added because Latin usually doesn't like suffixes attached directly to consonant stems (cf. pet-o "I ask" → pet-i-tus "asked", from supine suffix -tus → English petition).

If E–M should be wrong, then you might go with Draconis's suggestion of filler vowel -i- with supine -t-, but then the -r- would be a mystery, which is not very satisfying.

At any rate, any conexion with the chief root of iter would seem unlikely; it just so happens that the stem of ire "go" is i-, and you will find many i's in Latin. The suffix -ter in iter is probably unrelated, also because the genitive is generally itineris, about which I dare not speculate.

Incidentally, calx and falx may be of Etruscan origin, and also arx, merx (English falcon, commerce): 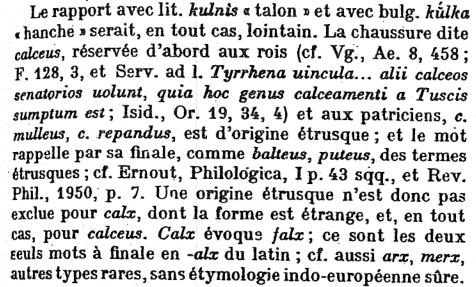 There is in fact an -it- morpheme, and you probably already know it! It's the same one found in auditus "heard" and habitus "had".

Longer version: in Latin, one could make a verb frequentitive (denoting an action repeated over and over) by putting first-conjugation endings -ō, -āre, -āvī, -ātus onto the supine stem (the fourth principal part) of any other verb. For example, dicō, dicere, dīxī, dictus "to speak" → dictō, dictāre, dictāvī, dictātus "to say something over and over".

However, this isn't the morpheme that led to "recalcitrant". I'm not sure where the -itr- came from (unlike -it-, it's not a morpheme I've seen before), but L&S and others are clear on the word being calcitrō, not *calcitō. (The first part, as you mentioned, is from calc- "heel".) So I would chalk that up to a typo in your dictionary.

Not the answer you're looking for? Browse other questions tagged etymologia or ask your own question.