A Latin word for the Finnish doctoral sword

The academic dress of a Finnish PhD looks like this: 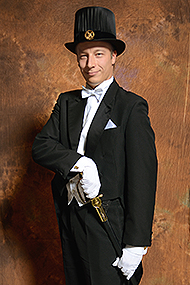 There are variants for different occasions. For example, the sword is sometimes omitted, sometimes a gown is worn instead of a white tie and ladies use a dress comparable to a white tie. If you want more details on the dress, you can have a look at these instructions about hats and swords at my university.

I am looking for a Latin word for the sword that comes with this dress. The sword is 87 cm long (blade 75 cm), weighs 730 g and looks like this: 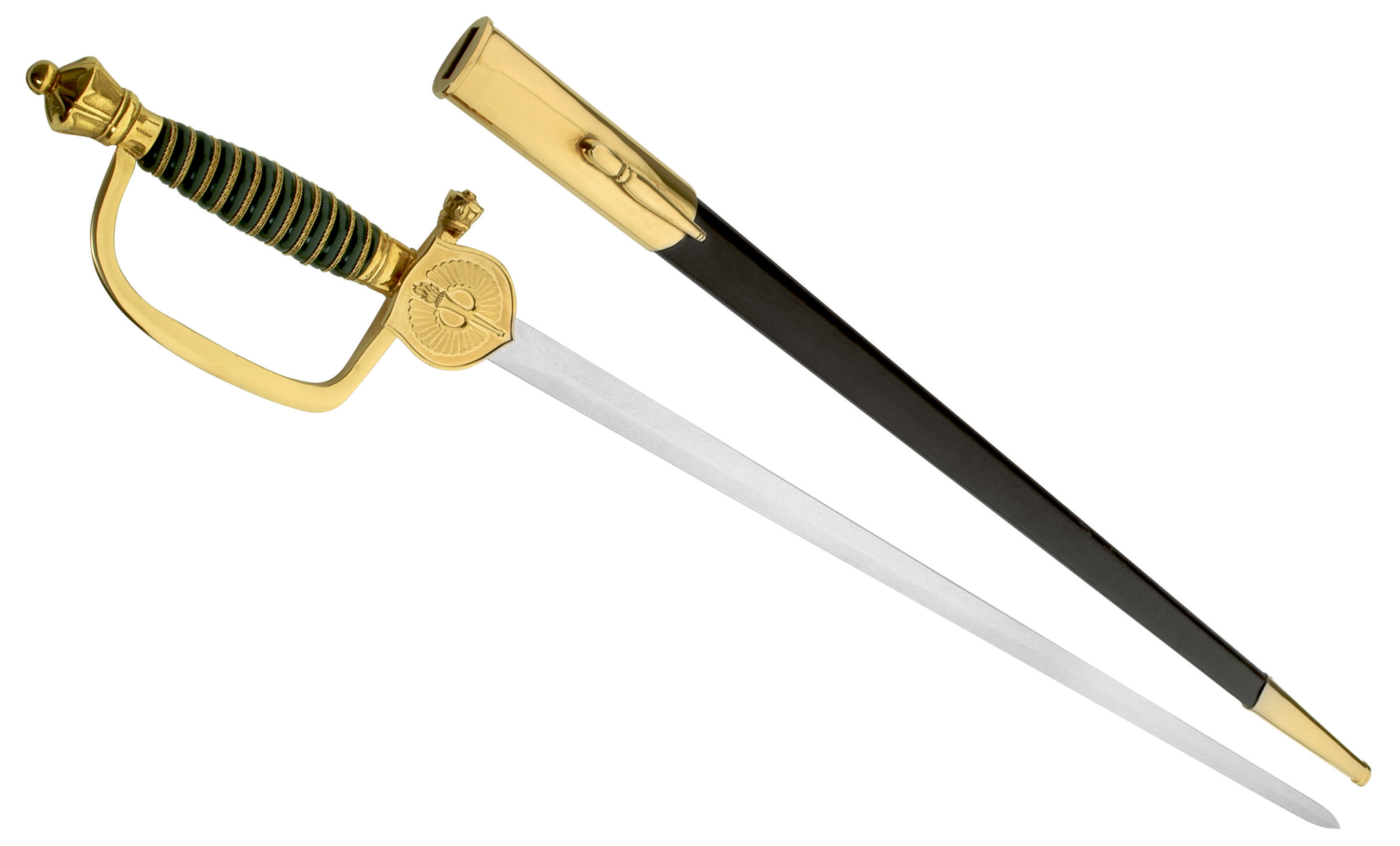 Both photos are from the pages of my university.

There are several Latin words for a sword. I found these: chalybs, copis, dolo, ensis, ensiculus/ensicula, ferrum, framea, gladius, harpe, ligula, machaera, mucro, palus/palum, rumpia, spatha, telum. Which Latin word would be most appropriate for this sword, given its appearance and use? As a side question, if academic swords are used elsewhere, what are they called in Latin?

My best guess is ensis (doctoralis), but I am no expert in swords and I would like to know if there is a better choice.

It seems there are quite a lot of places to look for thoughts about the various words for swords. I offer passages from three, in chronological order:

Ramshorn (1841) gives the following commentary about some of the words for "sword":

Gladius (from κλάδος) is the usual, ensis (from ansa?) the select and poetical name for a sword. Quintil. x. 1,11. (v. 188). Pugio (from pungere) is a dagger, as a fair and openly used soldier's weapon, on a level with the sword; whereas sica (from secare) is the unfair and secret weapon of the bandit, on a level with poison.

From these, it seems that gladius would work, but ensis is perhaps less appropriate. I'd vote against both mucro and telum, as the former usually refers to the point of a sword rather than the weapon entire and the latter to any kind of weapon whatsoever.

The most specificity I've been able to find is in a translation of Aulus Gellius's Noctes Atticæ, X.25. The original reads as follows:

John Carew Rolfe (1927) gives the following translation of this passage:

Once upon a time, when I was riding in a carriage, to keep my mind from being dull and unoccupied and a prey to worthless trifles, it chanced to occur to me to try to recall the names of weapons, darts and swords which are found in the early histories, and also the various kinds of boats and their names. Those, then, of the former that came to mind at the time are the following: spear, pike, fire-pike, half-pike, iron bolt, Gallic spear, lance, hunting-darts, javelins, long bolts, barbed-javelins, German spears, thonged-javelin, Gallic bolt, broadswords, poisoned arrows, Illyrian hunting-spears, cimeters, darts, swords, daggers, broadswords, double-edged swords, small-swords, poniards, cleavers.

Of the lingula, or "little tongue," since it is less common, I think I ought to say that the ancients applied that term to an oblong small-sword, made in the form of a tongue; it is mentioned by Naevius in his tragedy Hesione. I quote the line:

Pray let me seem to please you with my tongue, But with my little tongue (lingula).

The rumpia too is a kind of weapon of the Thracian people, and the word occurs in the fourteenth book of the Annals of Quintus Ennius.

Of the terms in Rolfe's translation, "small-sword" ("a light one-handed sword designed for thrusting which evolved out of the longer and heavier rapier of the late Renaissance") seems the most appropriate for the images in your post. If he is to be trusted (I'm agnostic on the point), then lingula is probably what you want. I suppose you could add doctoralis, but given the paucity of uses one finds for the sword today that seems to me to be a touch scrupulous.

While the Romans did not give swords to those who became educated at a higher level (education was not as formal as it is today), they did give swords for other occasions, such as when a gladiator was freed from slavery (rudis). This does not quite fit your situation, however, so I turned to swords that looked similar. The most similar sword is the spatha, which was a similar length and used by the cavalry. 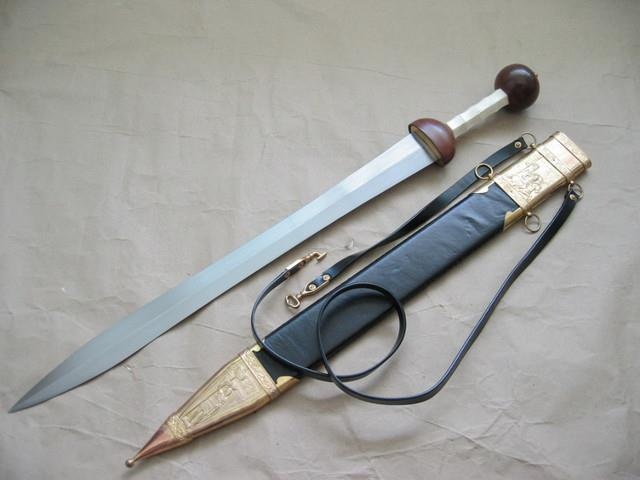 The handle of the sword is definitely different, but the style of weaponry was very different during the Roman era. I would say that adding an adjective like doctoralis makes sense (i.e. spatha doctoralis). That is about as close as you could get to what you are looking for. Ensis means sword, but in a more general sense.

That is what is generically called a court sword. Sometimes, the word "dress sword" is also used, but that term tends to be more often used in the context of military dress swords. There is a fairly good discussion of European court swords in the linked auction catalog. Also, this English dealer has some good pictures of Victorian court swords which as you can see are similar to the type you have.

In ancient Rome court swords were not generally used and having weapons in court situations was frowned on. However, they did of course have short swords similar to court swords. For example, Plutarch mentions Tiberius as carrying one secretly under his toga for self defense:

[Thereupon the men of property put on the garb of mourning and went about the forum in pitiful and lowly guise; but in secret they plotted against the life of Tiberius and tried to raise a band of assassins to take him off, so that Tiberius on his part—and everybody knew it—wore a concealed short-sword such as brigands use (the name for it is “dolo”).]

Here, Plutarch refers to the otherwise unattested until Isidore (as far as I can determine) Latin word dolo or dolona as δόλωνα. (Note that dolo is the Latin word for hewing or chopping.) Sometimes Romans referred to short swords simply as brevis ensis. You will find words like pugio or sica, but these are more like daggers in most cases. In any case, the Romans did not have the concept of a court sword, because, they did not wear swords in court. (Note that the gladius, although it was certainly a kind of short sword and sometimes the term is used generically for a sword, it was a very specific type of military weapon, not a civilian or ceremonial weapon in any way. The Greek term xiphias would be more appropriate as a generic word for a short sword, or better yet the diminutive ensiculus, which was used by Plautus in The Rope.)

Given that the sword asked about seems to be descended from 19-century models it would seem appropriate to check if there is a New Latin term for court swords, that would be better than the default choice of ensiculus. One idea is to use the word mucro which literally means a point, but euphemistically a sword. Hence, we have potential objective compounds such as mucrodecorum (mucro + decoro), the "honored and dignified point", giving a delicate and refined way to say it, just as we call a cat not a feles, but a murelegus (a mouse collector). Also, because the handle of the weapon is poetically used for a sword, we can use a term such as capulus honoris (the "hilt of honor"). Another euphemism for a sword is the ligula (the 'tongue'), so that is also fodder for neologisms. Finally, the very direct solution would be to simply translate court sword directly into Latin. So, we have technically ensis comitati, or more fluently ensis aulicus, or by elision the neologism, ensaulicus.

5
Invitation to a thesis defence

11
Why is there no word meaning firearm in contemporary Latin?
10
Are doctoral dissertations still permitted to be given in Latin at any of the Pontifical Universities at Rome?
2
What is the etymology of the Latin name of Cambridge?
3
Since the fall of Latin as an academic language, has there been a project to revive it?
5
Why does the author use "illuminated" for "ignibus"?